This is Part 6 of our Legendary Cruise Ships series and it is our final part in the hugely popular topic. Take a look at those once iconic vessels we lost recently.

A series of articles about the legendary ships we lost in the past 10 years has come to an end. Today we will tell you about 2016 and 2017. In these two years, the world lost Vistafjord, a liner with some of the most beautiful shapes, in our humble opinion; Melody that never got the MSC prefix; the liner with Mona Lisa on her funnel; Seaward that could become a part of the “white ships” but became a Princess; the Carnival’s legend called Jubilee.

If you haven’t already you can read Part 5 by clicking here.

Let’s start with the beautiful liner that wore the image of Mona Lisa on her funnel. Kungsholm was built in 1966 as an ocean liner for the Swedish American Line. She operated sailings for this company for almost 10 years. In 1975, Flagship Cruises purchased the liner. Cruises from the USA became her main directions.

This liner is probably best known as Sea Princess. She got this name in 1978. That’s when the former Kungsholm became a part of the P&O fleet. After rebuilding, the ship got a completely new look. One of the funnels was removed; she received new staterooms; her tonnage was increased.

For more than 15 years, Sea Princess pleased her guests as a part of the Princess Cruises fleet. In 1995, she was renamed Victoria. After that, the ship mostly cruised from the UK for P&O Cruises.

By the way, Princess Cruises received new Sea Princess in the same year. “The Princess is dead. Long live the Princess!”

At the beginning of 2000, the ship spent some time under the flag of the legendary Union-Castle Line. In 2002, the vessel was sold. Her new name was Mona Lisa, and the image of Mona Lisa on the funnel became her distinctive feature.

Holiday Kreuzfahrten, the ship’s owners, went bankrupt in 2006. The ship was laid up for some time in Greece. In the autumn of 2006, Mona Lisa went to Qatar to become a hotel during the Asian Games.

In 2007, Mona Lisa was renamed Oceanic II. The vessel was chartered by Royal Caribbean Cruises Ltd., sub-chartered by Louis Hellenic Cruises, was a part of the Pullmantur Cruises fleet. In 2007-2008, Oceanic II was a part of The Scholar Ship educational program.

In late summer 2008, the ship was returned the name of Mona Lisa. In winter, she was a part of the Peace Boat. Besides, since 2008, Mona Lisa cruised under the flag of Lord Nelson Seereisen.

In 2010, the ship repeated the fate of dozens of liners: she didn’t meet the requirements of SOLAS. After that, it was decided to turn the ship into the floating hotel in Sweden. Unfortunately, that did not happen. As a result, the ship went to the Middle East.

At the end of 2010, Mona Lisa came to Oman. The ship served as the popular hotel in the city of Duqm for several years.

In November 2015, there were rumors that the ship was expected to return to Sweden. However… In the spring of 2016, the ship was scrapped in Alang.

Seaward was ordered in 1970. She was expected to become a part of NCL. It is likely that she could join the “white ships,” because she was the Southward’s sister. However, already during construction, the ship was sold to P&O because of the financial problems of the shipyard. As a result, in 1974, the world greeted the new liner, Spirit of London. P&O bought Princess Cruises in the same year.

Spirit of London became one of the first “Princesses,” Sun Princess. An interesting fact: in 1975, the ship took part in the filming of the popular Columbo TV show. Episode: Troubled Waters.

The ship operated sailings under the Princess Cruises’ flag for 14 years. The liner became a real movie star. She took part in the filming of the pilot series of The Love Boat and Herbie Goes Bananas.

In 1988, Premier Cruise Line purchased the vessel. The company was known for operating sailings for Walt Disney World Resort.

We can say that Starship Majestic (it was the new name of former Spirit of London) influenced, to some extent, the creation of Disney Cruise Line. In 1994, CTC bought the vessel and named her Southern Cross.

In 1998, Southern Cross became a part of Festival Cruises as Flamenco. In 2004, the ship was sold again. Her new name was New Flamenco.

After 3 years, New Flamenco became the floating hotel in New Caledonia for one year. Literally a year later, the ship was sold for scrapping. It would seem that it was done. And then… fate stepped in.

In 2012, the vessel was bought again, and she began to take cruises. Her new name was Ocean Dream.

Unfortunately, happiness did not last long. Her sailings were not very popular. In 2013, the ship was resold, but she did not operate sailings anymore. She spent the last years near Laem Chabang. The vessel was put up for sale. On February 27, 2016, an abandoned ship sank in shallow water.

Atlantic met a similar fate. Perhaps you know her as Melody. But first things first. Atlantic was built in 1982 for Home Lines. From 1988 to 1997, the vessel served Premier Cruise Line already known to us. Her name was StarShip Atlantic.

In 1997, the ship became a part of the MSC Cruises fleet as Melody. Despite the fact that in 2004, it was reported that the ship was renamed MSC Melody, that did not happen officially. 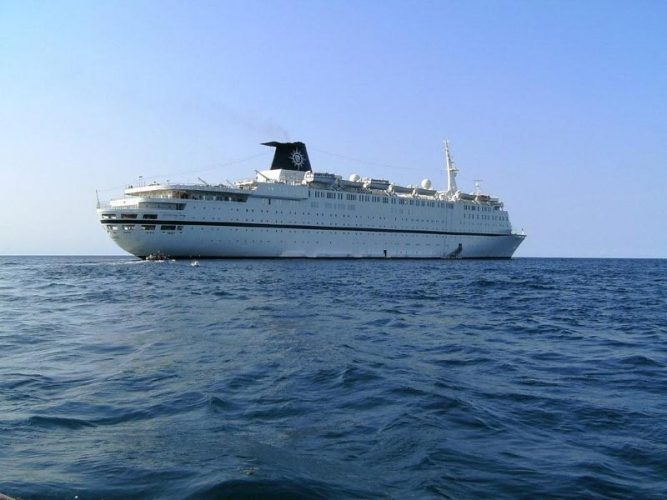 An interesting fact: on April 25, 2009, Melody was attacked by the Somali pirates. This happened during the cruise from Durban (South Africa) to Genoa (Italy). A boat with six pirates attacked the ship at about 11:25 PM.

The ship was defended by passengers, who used improvised means, including tables and chairs. Besides, Melody was protected by private security, which used fire hoses and pistols.

A day later, the Spanish warship began to accompany Melody to ensure security. Another day later, on April 27, 2009, another Spanish frigate found and arrested the pirates. In 2013, the ship was sold to the Indian company, Sahara India Pariwar. Melody became Qing.

The ship first had to become the floating hotel in Goa, after there were ideas to turn the ship into a casino. However, in the end, she spent several years near the port of Mormugao.

The abandoned ship partially sank on June 29, 2016. Rains were among the main reasons for this.

The further fate of the ship is vague. She was partially sunken for almost a year. Apparently, the ship will be scrapped. Given the fact that the ship doesn’t have chances to get back out there, we included her in this list.

The next ship, Vistafjord, is a real legend. The ship was built in 1973 for the Norwegian America Line. After 10 years, the ship together with her sister, Sagafjord’s (we talked about her in the previous parts), became a part of Cunard Line (at the time of purchase of NAL). Her name remained the same.

In the mid-1980s, Sagafjord and Vistafjord were considered to be among the most luxurious cruise liners in the world! In 1999, it was decided to give the ship another name, more traditional for Cunard. She was named Caronia.

Five years later, in 2004, the vessel was sold to Saga Cruises. Her new name after the repair was Saga Ruby.

At the end of 2013, the ship took her last cruise. In January 2014, the ship was sold to a Singaporean company. The former Vistafjord had to become the floating hotel called Oasia.

In April 2017, it became known that the legendary ship was sold for scrapping in Alang.

Jubilee is one of the Carnival’s legends. She entered service in 1986. Jubilee is a representative of the popular Holiday-class of cruise ships. Her sisters are modern Grand Celebration and Magellan.

The ship operated cruises under the Carnival’s flag for 18 years! In 2004, the ship was transferred to the Carnival’s subsidiary, P&O Cruises Australia. She became known as Pacific Sun.

An interesting fact: Jubilee is the only one of the sisters whose typical “Carnival funnel” was changed. A standard Carnival whale’s tail on the funnel was dismantled. At the end of 2011, it became known that Pacific Sun would leave the P&O fleet the following summer.

In 2012, former Jubilee became a part of the HNA Tourism Cruise as Henna. Since the end of 2015, the ship was laid up and was put up for sale. In the spring of 2017, the vessel was sent for scrapping in Alang.

In fairness, we should note that in 2016-2017, the number of new ships significantly exceeded the ones that we lost. During these years the world saw Koningsdam, Harmony of the Seas, Ovation of the Seas, Carnival Vista, Viking Sea, Viking Sky, Regent Seven Seas Explorer, Seabourn Encore, Silver Muse, Majestic Princess, Norwegian Joy, MSC Meraviglia, MSC Seaside, and others.

At the moment, Jubilee concludes the series of tragic articles. In just 10 years, the cruise world lost about 40 legendary ships. We told you only about the most famous of them.

We should note that almost all the ships were scrapped. Only three ships sank, and only Costa Concordia was on the cruise and had passengers on board. That is a sad statistics of the last 10 years. We will continue this series of articles in a year and will tell you about the losses of 2018. 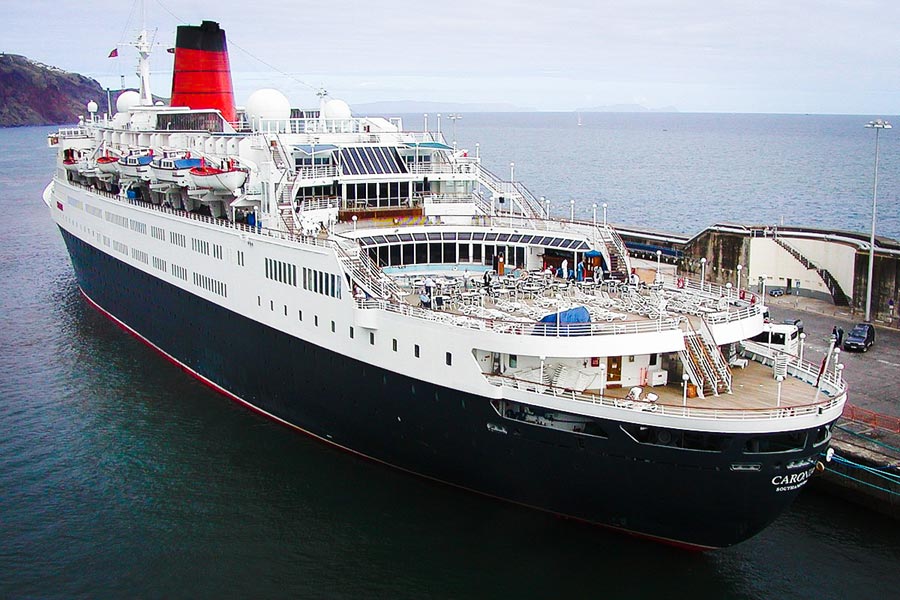