This is Part 3 of our Legendary Cruise Ship series. We are covering those iconic cruise ships which were lost in 2013 including the ships known as Southward and Pacific Princess.

This is Part 3 of our ongoing series of Legendary Cruise Ships where we cover those iconic vessels from many different cruise lines which were once bustling with cruise passengers. let’s find out what happened to these vessels and where they are now. You can read Part 1 and Part 2 too.

The year 2013 became fatal for several famous ships including the fourth ship of Norwegian Cruise Line, Southward, and Pacific Princess that became one of the stars of the most popular cruise TV show.

Southward is one of the so-called legendary “white ships” that became the icons of young Norwegian Caribbean Line (Norwegian Cruise Line since November 1987). This list includes Skyward, Starward, Southward, and sometimes Sunward II. We should note that, despite the similar design, Sunward II can’t be considered a full-fledged sister of “the white ships” since she was not originally built for NCL. However, we will discuss this unusual “cunarder” in the next article.

Let’s return to Southward. The ship was built in 1971. The ship’s main itineraries were the Caribbean cruises from Miami.

After 16 years, the vessel was transferred to Los Angeles. Southward began to take regular voyages along the west coast and to Mexico. San Diego, Catalina Island, and Ensenada were among the popular ports of call. According to a legend, the new market and Southward became one of the reasons for the company’s renaming.

In 1994, after 23 years of service, the liner was sold to a little-known company called Sun Cruises. Southward was renamed Seawing. Almost after ten years, Seawing with the new name of Perla joined the famous company, Louis Cruise Lines.

After that, she was chartered to another company. Then she returned under the flag of Louis Cruise Lines. The Aegean Pearl was another name of former Southward. In 2010, the ship under the name of Rio joined the little-known company called Rio Cruises.

In 2012, the vessel became known as Venus, and she still had to sail, but… The next year, she was in Aliaga (Turkey). In the same year, she was utilized.

Thanks to the famous maritime historian Peter Knego from Maritime Matters, we have the opportunity to see the heartbreaking photos of this ship’s last months. We hope he doesn’t mind us posting these pictures here.

Have you ever heard of the ship called Canguro Verde?

The liner was built in 1967 in Italy at the shipyard which is now known as Fincantieri. She could accommodate more than 700 passengers and 480 crew members. Initially, the ship operated cruises in the Mediterranean Sea. Genoa, Barcelona, and Cagliari were the main ports. Besides, the ship operated sailings in the Middle East and the rest of the Mediterranean (already being a part of other owners’ fleets, for example, Fayez Trading & Shipping from Saudi Arabia from 1981 to 1989).

During her long career, the ship had many names including Durr, Ionian Harmony, Sun Fiesta, and Regent Jewel. Perhaps the most famous name was Calypso and names derived from it: The Calypso and Caly (before utilization).

Regency Cruises, Transocean Tours, Louis Cruises, and Thomson Cruises were among the ship’s most popular operators. In 2013, the ship was utilized in Alang. Two ex-princesses were scrapped in the same year.

Do you remember Sky Princess?

After that, the ship changed a few more owners. In 2000, the ship was transferred to P&O Cruises Australia. Her new name was Pacific Sky. As you can see, the prefix Sky remained unchanged for 16 years and three names.

The ship became very popular. For six years, Pacific Sky departed on more than 200 cruises taking onboard about 275 thousand people! Some sources say that the appearance of former Sky Princess greatly influenced the cruise market in Australia. After her, such famous ships as Pacific Sun, Pacific Dawn, Pacific Jewel, and Pacific Pearl appeared in Australia. Maybe it’s a legend, but does it really matter? The main thing is that the cruise world is developing.

In 2006, the ship was sold to Pullmantur Cruises (the company affiliated with Royal Caribbean Ltd., in fact, its subsidiary). Former Sky Princess was named Sky Wonder.

In 2009, the ship was laid up in Greece. However, the ship got the new name of Atlantic Star just a month later. The ship went to the new market.

Unfortunately, the miracle did not happen. In 2013, Atlantic Star under another name went for scrapping to Aliaga (Turkey).

Pacific Princess became the most famous ship scrapped in 2013. She was built in 1970 (she took her first voyage in 1971). For several years, she operated cruises as Sea Venture under the flag of the little-known company, Flagship Cruises. In 1975, she became a part of Princess Cruises along with her sister known as Island Princess.

Both ships became world-famous in the late 1970s when the television show The Love Boat came out. It is fair to say that Pacific Princess became the main ship for filming.

Many researchers claim that this TV show resulted the development of cruises popularity in the USA! And the “The Love Boat” theme is still associated with Princess Cruises. Just listen to the horn of their flagships, for example, of Royal Princess! Doesn’t that remind you of something?

Probably thanks to her popularity, the ship remained in the Princess Cruises’ fleet until 2002, for more than 27 years!

The ship’s last sailing was the Transatlantic cruise. Pacific Princess went from New York City to Rome. After that, the ship sailed under the flag of Pullmantur Cruises as Pacific.

After some time, the vessel changed owners (according to some sources, she was chartered). After 2008, Pacific had a terrible fate. At first, she was arrested in Italy for the debts of new owners, Quail Cruises.

As a result, the ship was put up for auction. She was sold to ship breaking company for two and a half million Euros. In the summer of 2013, the “Love Boat ship” went to Turkey for scrapping…

It is fair to say that in 2013, the world saw MSC Preziosa, Norwegian Breakaway, Royal Princess, AIDAstella, and other famous ships. But that’s another story. 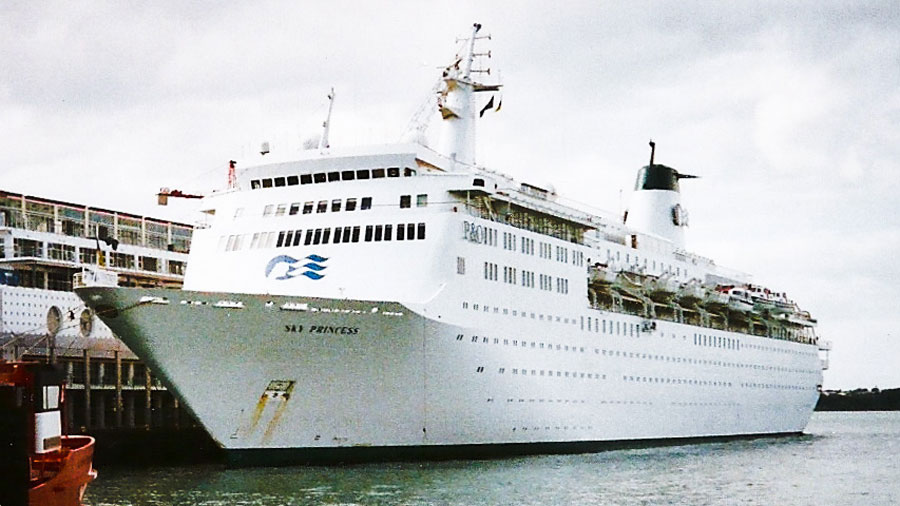