This is Part 2 in a series of the legendary cruise ships we've lost in the past 10 years. Read up on these well-known vessels and what happened to them. These iconic ships in the cruise industry will long be remembered. This article covers ships lost in 2012. 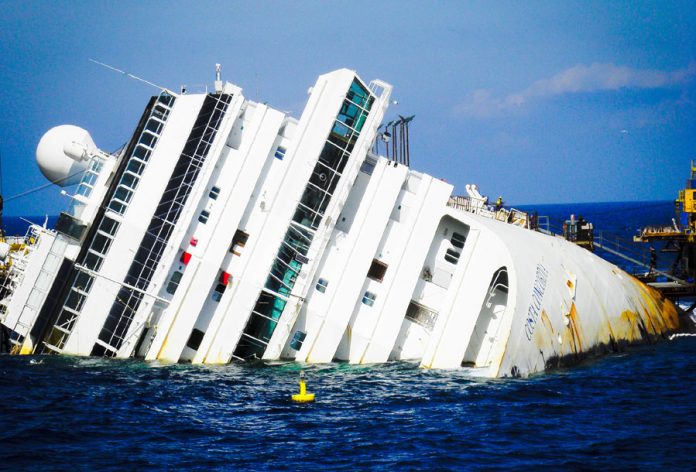 In part 2 of our Legendary Cruise Ship series, we look at 2012. A tragic year for the cruise industry with Costa Concordia and all those lost souls will long be remembered. If you haven’t already then hop on over to Part 1 first. Let’s take a look at the ships we lost in 2012.

The tragic death of Costa Concordia, utilization of former Princess Italia, Oceanic, Costa Allegra and other famous ships – all of it marked the loss of the cruise world in 2012. We continue the series of our articles about “Legendary Cruise Ships Lost in the Past 10 Years.”

Of course, the most famous cruise tragedy of the last decade is the wreck of Costa Concordia, which happened early in the year 2012.

September 2, 2005: Costa Concordia, the first representative of the Concordia class of cruise ships, was launched in Genoa. At that time, this class was one of the biggest for Italian shipyards. By the way, this class has become quite popular, and probably you know its representatives: Carnival Splendor (she was initially intended to be a part of Costa), Costa Serena, Costa Pacifica, Costa Favolosa, and Costa Fascinosa. 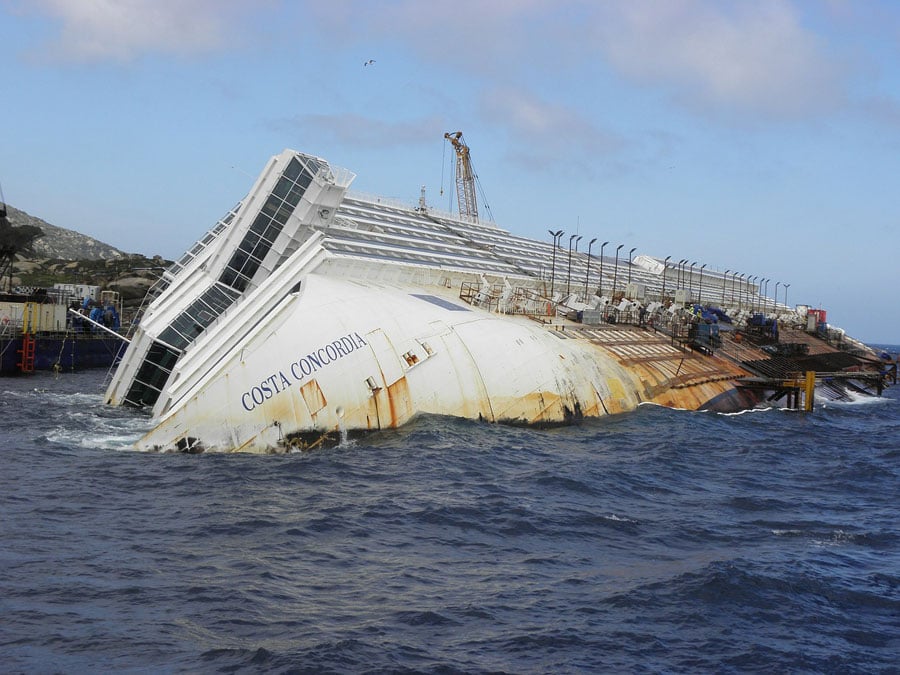 As of 2005, Costa Concordia became the biggest ship of Costa Cruises. Besides, according to some sources, she was among the world’s top 10 biggest cruise ships in 2006.

During her Christening ceremony, a bottle of champagne oddly did not break against the ship’s side at the first attempt. According to the sea legends, this was a bad sign. However, the ship took dozens of cruises without any problems, and people forgot about this sign.

On January 13, 2012, Costa Concordia departed on another 7-night cruise from Civitavecchia (the port near Rome). Savona had to be the next port. The itinerary was quite regular for winter Mediterranean cruises.

A little more than two hours after departure and after passing only about 60 miles, the ship got dangerously close to the rocks of the island of Giglio. According to the itinerary, she had to pass a few miles east of the island. However, on the captain’s orders, Costa Concordia changed the route.

We won’t discuss the further causes of the tragedy and its details today. Objectively, it is the topic for a separate article. Moreover, you can find a huge amount of analysis and conclusions around the web and from the Italian police on this topic.

But the fact remains. Due to the actions of the captain that can hardly be called professional, Costa Concordia ran aground on a reef at 9:45 pm (21:45:07). The ship got more than 50 meters of damage on the port side and began to sink. As a result, at first, there was an idea to return to Civitavecchia. However, after realizing the scale of the tragedy, there was a hope to reach at least the port on the island of Giglio. 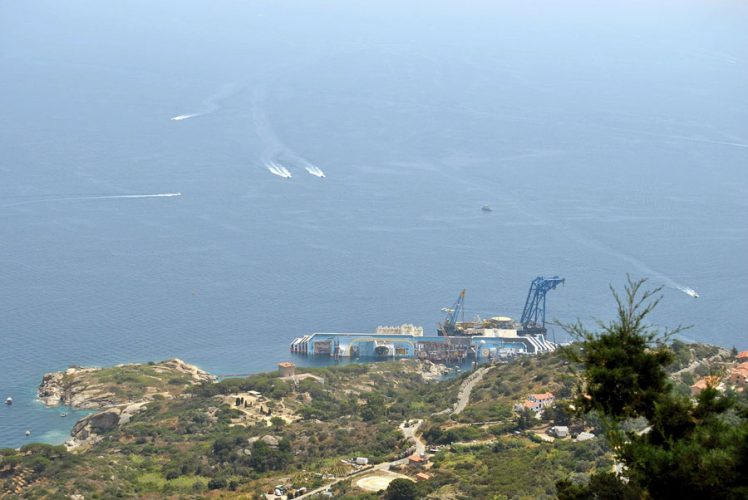 The further tale is extremely terrible and cautionary. Everything was not on time. Everything went wrong. The team often did not know what to do. Besides, there was a problem with a language handicap. The captain fled. At times, the passengers were left to their own devices. However, we should note that many crew members helped the passengers to orient themselves and escape. Some crew members were real heroes. For example, one of the musicians, Giuseppe Girolamo, sacrificed his seat to the child. The body of the musician was found several days later.

As a result of the disaster, 32 people died, including 3 brave souls who tried to escape by swimming. After all, the shore was so close, just at the distance of one Olympic pool. However, water in January and the rocky shore left little chance to escape.

By the way, when the last boat was launched, there were still about 500 people left on the ship. They were rescued by helicopters and coast guard ships.

In total, taking into account the boats, more than 4,000 people were rescued. Costa Concordia became the biggest wrecked cruise ship in history.

We can describe the consequences of the catastrophe in the separate article, as well as its causes and the catastrophe itself. Considering that we have a kind of summary of 10 years, we will refer only to the main moments. The tragedy of Costa Concordia irreversibly affected the safety of cruises in the world. Besides the changes in requirements and training for the crew, a muster drill for all passengers before the ship’s departure from the port has become mandatory.

The fact is that at the time of the tragedy of Costa Concordia, this requirement applied to the first day of the cruise. In that case, the muster drill was not conducted. A separate issue was the impact of the collapse on the environment.

To continue remembering the ships that we lost in 2012, let’s go back to 1957. That’s when a beautiful ocean liner with a charming name, Santa Rosa, was launched. The ship was built for the once-famous company called Grace Line. Unfortunately, she’s known mostly to the fans of cruise history nowadays. Some historians believe that Santa Rosa was one of the last ocean liners built in the US.

At that time, the ship had interesting features: the air conditioning system and the fact that all cabins had the ocean view and a bathroom.

This ship deserves not just an article but a separate book. But we have the summary. Therefore, let’s quickly go through her history. For more than 50 years of service, the ship wore several names: Diamond Island, Regent Rainbow, and The Emerald. Besides Grace Lane, she sailed under the flags of Regency Cruises, Thomson Cruises, and Louis Cruise Lines.

Unlike many ships from our review, The Emerald met the requirements of SOLAS 2010. However, despite this fact, in 2009, Louis Cruise Lines decided to “lay up the ship.” In 2012, the ship was scrapped in Alang, India.

Black Prince built in 1966 as a cruise ferry was rebuilt into the cruise ship in 1986. It’s interesting to know that the ship sailed under the flag of Fred. Olsen Lines/Fred. Olsen Cruise Lines for the better part of her history. From 1970 to 1985, the ship was transferred for summer cruises to the fleets of other operators under the new name of Venus. Among the operators were Bergen Steamship Company, DFDS (The United Steamship Company), and Norway Line.

The ship operated cruises until 2009. After that, Black Prince did not meet the new requirements of SOLAS 2010. Then there were plans to use the ship as a floating hotel or for cruises around the islands near Venezuela. However, in the end, in 2012, the ship was utilized.

Oceanic was the name of the liner launched in 1963. The ship was built for Home Lines (a European company well-known in the past).

Oceanic was a combination of the ocean liner with two classes in the summer and the cruise ship with one class in the winter. The ship sailed under the flag of Home Lines for almost 20 years. In 1985, Oceanic was sold to Premier Cruise Line.

Change of owners entailed a name change. The ship was called StarShip Oceanic. She specialized in cruises from Port Canaveral to the Bahamas. According to some sources, there was an opportunity to combine the cruise and rest in the Walt Disney World in Orlando. Can we call this the pre-history of Disney Cruise Line? Maybe.

In 2000, the ship became a part of the fleet of the new company, Pullmantur Cruises. The ship successfully passed the SOLAS 2010 tests already known to us.

Oceanic sailed under the Pullmantur flag for almost nine years. In the spring of 2009, the ship was transferred to Peace Boat.

A terrible fact: in 2010, the ship was attacked by pirates near the coast of Yemen. Skillful actions of the crew saved the ship. In the summer of 2012, the ship was sent to China for scrapping.

Princesses died in 2012! It’s a big headline, is not it? MS Sapphire has the right to such a title because she bore the names of three princesses: Princess Italia, Ocean Princess, Princesa Oceanica and of one prince, Sea Prince.

The ship’s distinctive feature was the fact that she was initially designed as the cruise ship. It so happened that Princess Cruises became the first “operator” of the ship. The ship sailed under its flag for just six years, and we’ll remember the name of Princess Italia forever.

After that, the ship sailed under the flags of Costa Cruises, Ocean Cruise Line, Sunshine Cruise Line, Thomson Holidays, and Louis Cruise Lines. Besides the names mentioned above, the ship was called Italia, Sapphire, and Aspire (before her utilization).

Like many ships of recent years, Sapphire did not meet the requirements of SOLAS 2010. It was decided to send the ship for scrapping. In the spring of 2012, the ship came in Alang under the name of Aspire.

Does the name of Costa Allegra say anything to you? The history of this ship is fascinating. It’s kind of legendary. Annie Johnson was built in 1969 as a container ship! 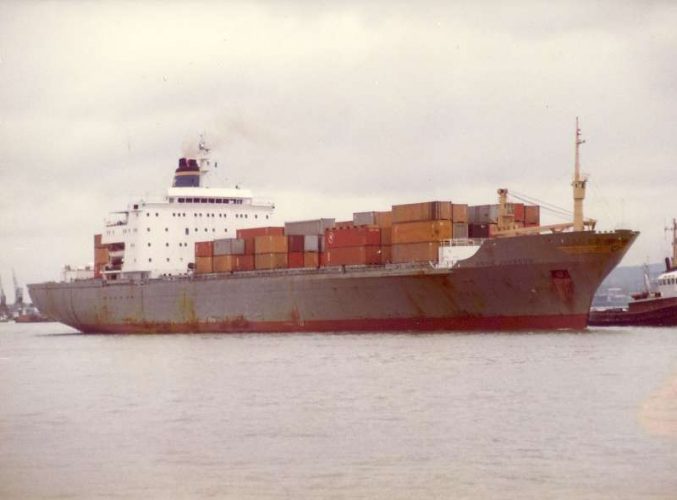 In 1990, the ship was bought by the well-known company, Costa Cruises. Soon the vessel was rebuilt into the cruise ship and named Costa Allegra. In 1992, the ship began to operate cruises. It’s a unique case!

The ship operated sailings in the Mediterranean, Caribbean, and Asia. Costa Allegra sailed under the flag of Costa Cruises for more than 20 years. It is likely that the ship could be in service until now. However, on February 27, 2012, there was a fire on Costa Allegra. The fire was in the technical rooms. Despite the fact that the fire was stopped, some systems were damaged, and the ship drifted about 200 miles across the Indian Ocean.

As a result, Costa Allegra was towed by a fishing boat to Seychelles. There was an evacuation of more than 1000 passengers. A few weeks later, it became known that the ship would be sold for scrapping in Turkey.

2012 did not become the End of the World, as the Mayans predicted. 2012 became the end for several legendary ships.

We should note that the world saw several amazing ships in the same year, including Disney Fantasy, Costa Fascinosa, Carnival Breeze, MSC Divina, AIDAmar, Celebrity Reflection, Riviera, and others.

Only the history can answer which of these ships will become more legendary! To be continued…