Legendary Cruise Ships Lost in the Past 10 Years (Part 1)

This is PART 1 of Legendary Cruise Ships. In this first piece, we cover the ships lost between the years 2008-2011. You'll find out what happened to these well-known vessels and the different cruise lines that operated them.

We are always looking forward to the new cruise ships. Every year we read dozens of articles about the new beauties that will delight us in the coming decades. However, for some reasons, we do not pay enough attention and respect to those ships that delighted us yesterday.

We do not pay attention to rare posts about the fact that this or that legend was scrapped in Alang (India), Bangladesh, Turkey or at any other shipbreaking shipyard.

Did you know that more than 40 cruise ships and ocean liners were scrapped over the last ten years? This terrible number is impressive. Let us remember the once-legendary ships year after year! Today we will begin a series of articles about the ships that we have lost.

At least five well-known ships were scrapped that year. Former SS France definitely was the most legendary among them.

This fantastic vessel was built for the French Line in the late 1950s. She took her first sailing in 1962, since then she became a legend. When she was constructed, SS France became known as the longest passenger ship. This record was broken only by Queen Mary 2 in more than 40 years!.

In 1979, Norwegian Caribbean Line (Norwegian Cruise Line) purchased the vessel and renamed her SS Norway. She spent more than two decades under the NCL flag. In 2006, SS Norway was sold for scrapping. We should note that the cruise line changed her name to Blue Lady when selling the liner. 10 years ago (in summer 2008), the legendary vessel was utilized. 2008 became fatal not only for SS Norway.

The former liner of Costa Cruises and Louis Cruise Line, Mermoz/Serenade, was also scrapped in the same year. The vessel was built in 1957. Initially, this ship had a division into first, second, and third classes.

This liner is sometimes called the last classic liner of the colonial era of France. By the way, the cruise liner became completely cruise only in 1970.

Princesa Marissa was also scrapped in 2008. Her first name was Finnhansa. She entered service in 1964 as a cruise ferry in Finland. A little later, the ship became completely cruise. After that, she was a member of Birka Line and Louis Cruise Lines fleets.

The former Soviet liner Maxim Gorkiy became another legendary liner that was scrapped at the end of 2008. This ship had an interesting history. She was built in 1969 as a transatlantic liner under the name of Hamburg. She had an unusual funnel.

Because of the crisis in 1973, the vessel got the new name of Hanseatic and was up for sale. The American company that purchased her resold the ship to the Soviet Black Sea Shipping Company. She became the flagship of the Soviet cruise fleet. She was called Maxim Gorkiy. In 1988, the ship was leased to the cruise company called Phoenix Reisen. The ship’s name was left unchanged.

In 1989, Maxim Gorkiy became world’s famous for the fact that during her stop in Malta, she became a meeting place for the leaders of the United States and the Soviet Union (George H. W. Bush and Mikhail Gorbachev).

In 1991, the Soviet flag on the liner’s funnel was changed to the flag of Russia. She continued to be a part of Phoenix Reisen. At the end of 2008, she was sold to Orient Lines. However, in the fall of 2008, this brand ceased to exist. The liner’s fate was sealed.

In January 2009, it was announced that Maxim Gorkiy was sold for scrapping. Despite some attempts to save this beauty, she was finally scrapped in September 2009 in Alang

However, most cruise lovers get acquainted with her as Carnivale. She became the second representative of the young cruise line called Carnival in 1975 and remained its part for almost 20 years.

After Carnival Cruise Line, the liner sailed for Fiesta Marina Cruises, Epirotiki Line, Royal Olympic Cruises, Thomson Cruises, and Peace Boat. Besides Carnivale, the ship wore other names: for example, Fiesta Marina, Olympic, and The Topaz. In 2003, the vessel became a part of Peace Boat. And after five years, the former Carnivale was scrapped in Alang.

The year 2009 was more forgiving to the old cruise ships. The world lost two liners: Golden Princess and Regal Empress. Both ships are probably more known to you under other names.

Regal Empress is among the most famous vessels of the Greek Line. We remember her as Olympia. The liner was launched in 1953 and remained in service for 56 years! She also wore the names of Caribe and Caribe I. Besides the Greek Line, she sailed for Commodore Cruise Line, Regal Cruise Line, and Imperial Majesty Cruise Line.

The vessel is also known for the fact that she did not take cruises for almost ten years (1974-1983). Besides, being already known as Regal Empress, she became the heroine of the famous TV program “MythBusters.” She was used to test the myth: is it possible to ride a water ski using the cruise ship. In 2009, the ship was scrapped in Alang.

Perhaps, Golden Princess is better known as Costa Playa. The ship was a part of Costa Cruises for several years. For more than 40 years of her career, the ship changed more than ten names and eight owners. Besides the ones mentioned above, the ship’s most famous names were Finlandia, Finnstar, Pearl of Scandinavia, Ocean Pearl, and Joy Wave.

In 2010, the world lost three beautiful cruise ships. Sagafjord is definitely the most famous among them.

Sagafjord took her first cruise in 1965 under the flag of the legendary Norwegian America Line. In 1983, the ship joined the no less legendary company, Cunard. In 1996-97, she was chartered and sailed as Gripsholm. In 1997, the liner joined Saga Cruises and became known as Saga Rose. In spring 2010, the vessel arrived in Shanghai for scrapping.

Ausonia, one of the last vintage ocean liners, was utilized in the same year. We should note that this vessel can hardly be called world’s famous.The ocean liner built in 1956 became the star of the Mediterranean Sea. During her long career, she changed several names: Ausonia, Ivory, Aegean Two, and Winner 5 (already during the scrapping).

In 2009, the vessel no longer met the requirements of SOLAS (International Convention for the Safety of Life at Sea). By the way, many ships that we have lost in the last 10-15 years were scrapped because of the same reason.

Ausonia was decommissioned. After a while, she was sent for scrapping. By November 2010, the vessel was completely scrapped in Alang, India.

Renaissance that began operating in 1966 was also utilized in 2010. During the 44-year career, the vessel bore seven different names with Renaissance, World Renaissance, Awani Dream, Grand Victoria, and Blue Monarch among them. She served many companies, including the world’s famous Costa Cruises, Epirotiki Lines, and Royal Olympic Line.

This year was marked by the utilization of Independence, one of the most renowned ocean liners built in the USA. She took her first voyage in 1951. Initially, the vessel had the division of passengers into several classes.

In 1974, the vessel joined C.Y. Tung group and began operating cruises in Asia as Oceanic Independence.

In 1980, Oceanic Independence came back to the United States. She joined American Hawaii Cruises. At the same time, after reconstruction, the ship’s division into classes disappeared. Later, she got back her original name, Independence.

The vessel was accompanied by her sister, Constitution, all her life. In the mid-90s, parts of the Constitution, which had already been taken out of the fleet, were used to repair Independence.

Since 2001, Independence didn’t operate sailings. In 2003, the vessel was purchased by NCL and named Oceanic. A little later, the company said that they had sold her. In 2008, Oceanic was towed from San Francisco to Asia.

As a result, in 2010, the ship ran aground near Alang, India. In 2011, the once-legendary liner, one of the most renowned US liners, was finally scrapped.

By the way, many of these ships have already become legendary. Such a kind of exchange…

To be continued. The years 2012 and 2013 lie ahead and will be featured on Cruise Hive soon. 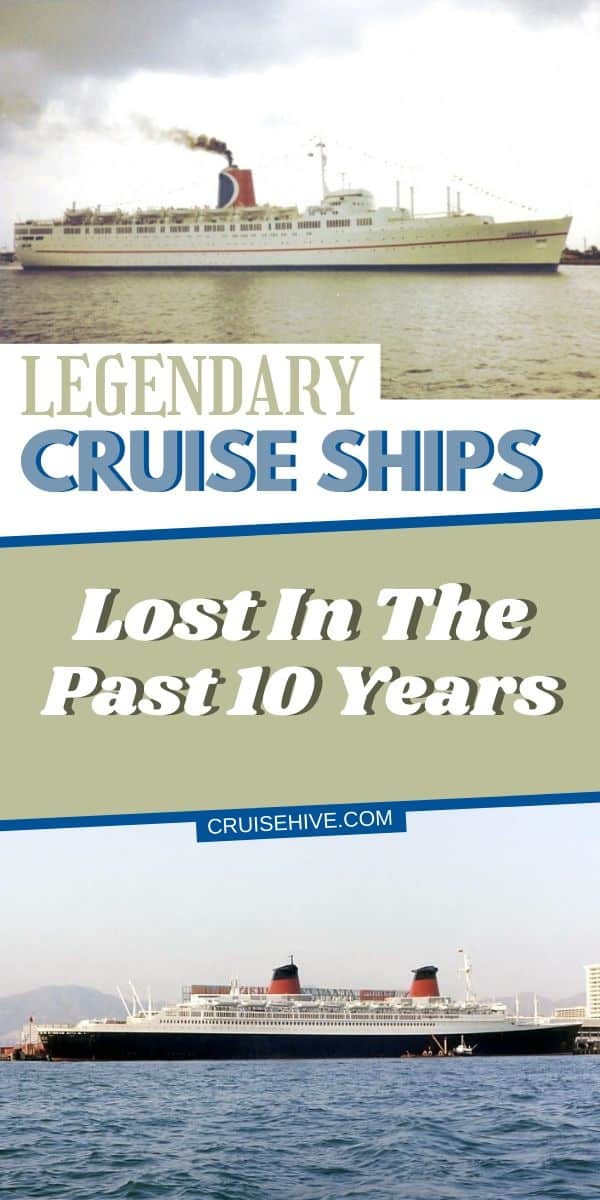