Live updates of the MSC Lirica cruise ship on fire at the Port of Corfu in Greece. Also, further details from MSC Cruises regarding how the fire started and the emergency response. 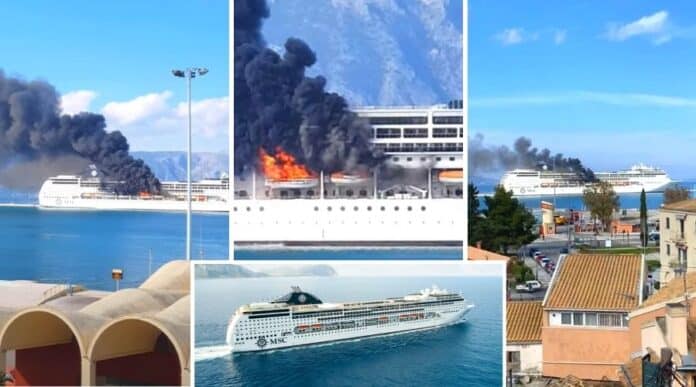 On Friday afternoon a fire broke out on board the MSC Lirica cruise ship at the Port of Corfu, Greece. This is developing news with updates being constantly updated in this post so keep checking back.

MAC Cruises released a second statement and that the incident of the fire on board MSC Lirica has now come to an end. In more details from the fire, MSC stated that the fire originated from one of the fiberglass lifeboats on deck 6.

There was also no damage to the interior of the vessel. The majority is the exterior from the thick black smoke. Here is the full statement:

Today at 3:42 p.m. local time in Corfu where she is currently in warm layup, MSC Lirica reported a fire incident into the MSC Maritime Support Centre in London, UK.

The fire originated from one of the ship’s starboard-side fiberglass lifeboats on deck 6.

The fire has since been brought under control thanks to the intervention of the ship’s two fire brigades and the support of the local emergency services.

The incident operation was declared completed by 6:58 p.m. local time.

There were no injuries among the 51 crew who were on board the ship at the time of the incident.

From a preliminary assessment, there was no damage to the inside of the ship but only to her side due to the flames and the dense black smoke caused by the fiberglass lifeboats.

A full investigation is now in progress.

A fire broke out on the MSC cruise ship, and it appears to be mid-ship on the starboard side. The footage posted on social media seems to be near the lifeboats with think black smoke coming out.

MSC Cruises has already confirmed that the fire started in an empty lifeboat on deck 6. A full incident response is underway at this time.

MSC Cruises responded to Cruise Hive with the following statement:

A fire on board MSC Lirica, which seems to have originated in an empty lifeboat on deck 6, was reported to the emergency services earlier today in Corfu where the ship is currently in warm layup.

No injuries were reported among the 51 crew who were on board the ship at the time of the incident.

A full incident response operation is currently underway with the support of the local emergency services.

The news first broke when local Maria Tatiita posted live footage as the fire started to break out aboard the MSC cruise ship. The live video witch you can re-watch below has already received more than 65,000 views on the social media platform:

At the moment no injuries have been reported and local authorities are on scene with the situation now under control since around 4:30 PM local time.

It took at least 50 minutes before a further rescue vessel arrived to help extinguish the fire. Local Coast Guard and several rescue assets are also on the scene. Cruise ships do have trained fire teams onboard so they would have also been dealing with the situation.

The good news is that there are no cruise passengers onboard. There are currently 51 crew members on board the MSC cruise ship. They are mainly essential crew to keep the vessel maintained during its pause of operations.

The ship has remained on hold since January and according to the Cruise Ship Tracker, has been at the port since March 1, 2021.

MSC Lirica entered service in 2003 and is over 65,000 gross tons with a guest capacity of over 1,900 at double occupancy along with 700 international crew members.

Also Read: When Will Cruises Resume in 2021?

At the moment only the MSC Grandiosa is in operation with cruises out of Genoa through May 2021. MSC Seaside will join her by also cruising in Europe for the first time from May 1, 2021.

For now, MSC Cruises has canceled East Mediterranean and Northern Europe cruises through April 2021. Cruises in the U.S. are suspended through May 31, 2021.