St. Maarten and St. Thomas have been devastated by Hurricane Irma along with several other Eastern Caribbean islands. New photos and updates have emerged of the once busy cruise ports.

St Maarten was almost totally devastated by Hurricane Irma when it hit on September 6 as a powerful category 5. With Irma’s eye crossing the Dutch and French sides it caused catastrophic damage to most standing buildings. Services completely collapsed and there have been multiple reports of looting.

When it comes to the cruise port in Philipsburg the surrounding areas were mostly destroyed but the port piers stood well against Hurricane Irma. The Dutch navy, Coast Guard, and even large cruise ships have already managed to dock at the port to help in ongoing relief efforts.

We got in touch with the St. Maarten port via Facebook and we got the following response:

The Port St. Maarten team is still assessing the damage. What we are seeing right now is cosmetic damage. We are looking at getting operations back up and running asap!

Our partner Facebook page of I Like Cruise Ships also managed to get some new photos of the cruise port when Royal Caribbean recently docked in St. Thomas as part of the cruise lines humanitarian efforts. Adventure of the Seas and Majesty of the Seas have both been involved in relief efforts.

The U.S. Coast Guard has also been heavily involved in recovery on the island and they have been working on restoring essential service on the U.S. island.

St. Thomas looks like Winter is coming!….These were taken yesterday from onboard the Royal Caribbean ship docked there to help evacuate people over to San Juan plus drop off much needed supplies.

Posted by I Like Cruise Ships on Wednesday, September 13, 2017

Both cruise ports are expected to be out of action for some time and a lot of work will be needed to help those residents affected by the huge Hurricane. Cruise lines are doing their best to provide provisions and evacuate people.

Cruise ships won’t be calling at St. Maarten or St. Thomas in the U.S. Virgin Islands until full damage assessments are done and the services to cope with thousands of cruise passengers are back up and running. 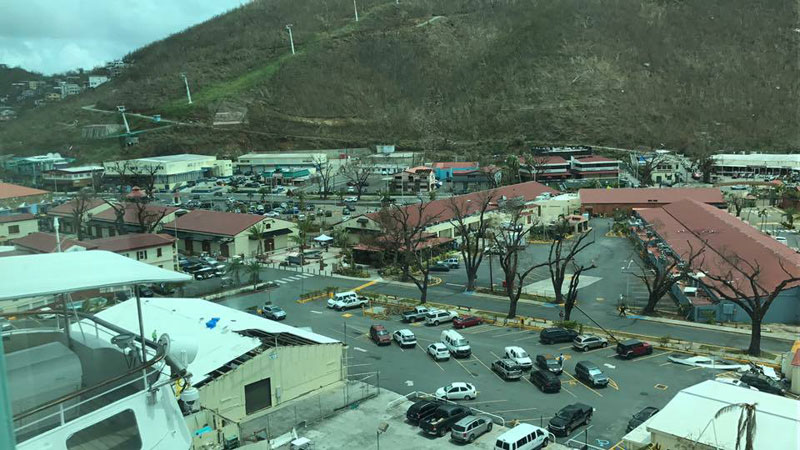