Latest Construction Photos from Onboard Next Royal Caribbean Cruise Ship

Royal Caribbean has released new construction photos from on board the next ship Symphony of the Seas.

Each month the cruise line has kept us updated with new photos and updates on Symphony of the Seas, the fourth Oasis-class vessel arriving in Spring 2018. In this latest batch of shots, we get to see how the fitting out phase is coming along and how the interior spaces start to come alive.

We also posted a construction update in June when Symphony of the Seas was floated out of the dry dock for the very first time and onto the water.

Latest Symphony of the Seas Fitting Out Photos:

The large vessel which is being built at the STX shipyard in Saint-Nazaire, France will become the new world’s largest cruise ship once it enters service in April 2018. At the moment thousands of workers and contractors are hard at it getting the interior spaces complete. Over the coming months, Royal Caribbean will unveil more details and features on the ship.

Symphony of the Seas will be 230,000 gross tons and be able to carry 6,780 guests and maximum capacity. The ship’s maiden voyage will depart Barcelona, Spain on April 21, 2018. The new ship will begin cruising from the new Royal Caribbean terminal at Port Miami in November 2018 once it has completed its inaugural season. 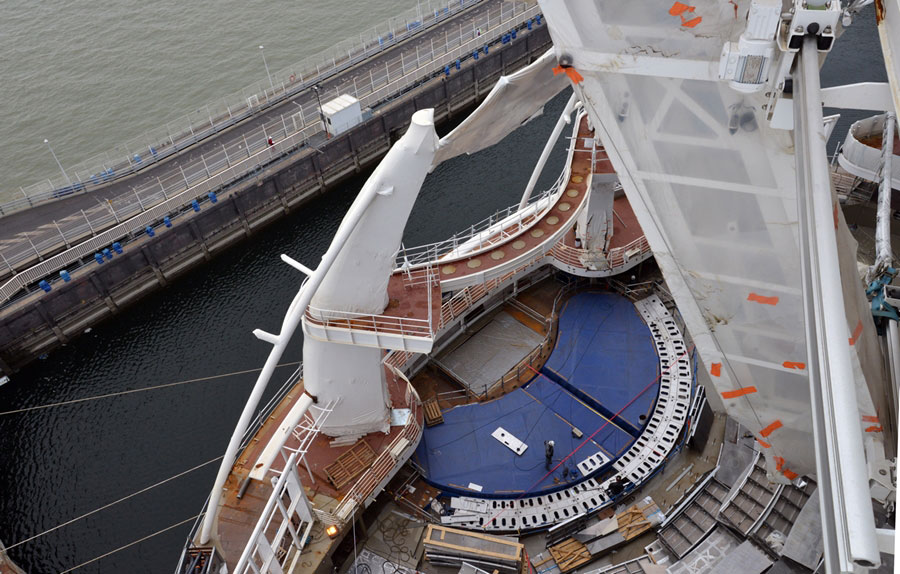