The cruise industry is booming with many large passenger vessels currently under construction. Cruise Hive looks at three ships which are among the biggest currently in the shipyard. It’s not easy to get the most recent photos of a ship while it’s under construction. Thanks to the world of social media we’ve managed to come up with some recent photos of three large cruise ships which are in the shipyard.

MSC Meraviglia is just one of many new vessels on the way for MSC Cruises. Meraviglia will be the first in its class with a second identical ship also on order. Meraviglia will arrive in June 2017 with the second ship in 2019. The cruise line has also ordered another two Meraviglia Plus class ships which will be even bigger.

MSC Meraviglia is 167,600 gross tons and will be able to carry 4,500 passengers at double occupancy. The 19 deck vessel will bring some brand new features to the fleet and will become the new flagship. At the moment the ship is under construction at the STX France shipyard in St. Nazaire, France.

STX France is used to building large ships, it’s the same shipyard which built Harmony of the Seas, the world’s largest cruise ship. MSC Meraviglia will be impressive all over from the 262 foot LED sky on the promenade to an entertaining Carousel Lounge for Cirque du Soleil and its performers, the ship will be one of the highlights of 2017.

The vessel is under construction at Fincantieri’s Monfalcone shipyard in Italy. There will be Chinese specific features added to the ship like KTV rooms, world-class shopping and a new Chinese restaurant called Harmony. Luxury will be taken to new heights with Majestic Princess.

The ship is 143,000 gross tons and will carry 3,560 guests. Majestic princess will set off on its inaugural cruise on April 4, 2017. After a series of European cruises the ship will begin its Repositioning cruise to its new home port in Shanghai, China on July 11. From China, the ship will take mainly Chinese passengers to Japan and Korea.

With all the cruise ship on order by MSC Cruises, it comes at no surprise that we are talking about another MSC ship! The MSC Seaside will be the first in its class with the MSC Seaview and a third also on order from the same shipyard. MSC Seaside will be 154,000 gross tons making it the largest ever built by Fincantieri so far.

MSC Seaside will introduce some new features to the fast growing fleet including three unique outdoor catwalks that extend beyond the edge of the ship, with all glass railings and a glass floor, giving guests the feeling that they are walking on water. The vessel will even have a 5D Cinema, Bowling Alley and the longest Zip-Line at sea.

MSC Seaside still has a long way to go in the construction phase with many major milestones still to come. The ship will be completed in December 2017 with its inaugural cruise setting off from Venice, Italy on November 30, 2017. The ship will begin year-round Caribbean cruises from PortMiami in December as part of the cruise lines north American expansion plans.

If you have any cruise ship construction photos of your own then feel free to keep as all updated by posting them in the comments further down below. We’ll be keeping readers informed on all the latest cruise ships entering service this year and the next. 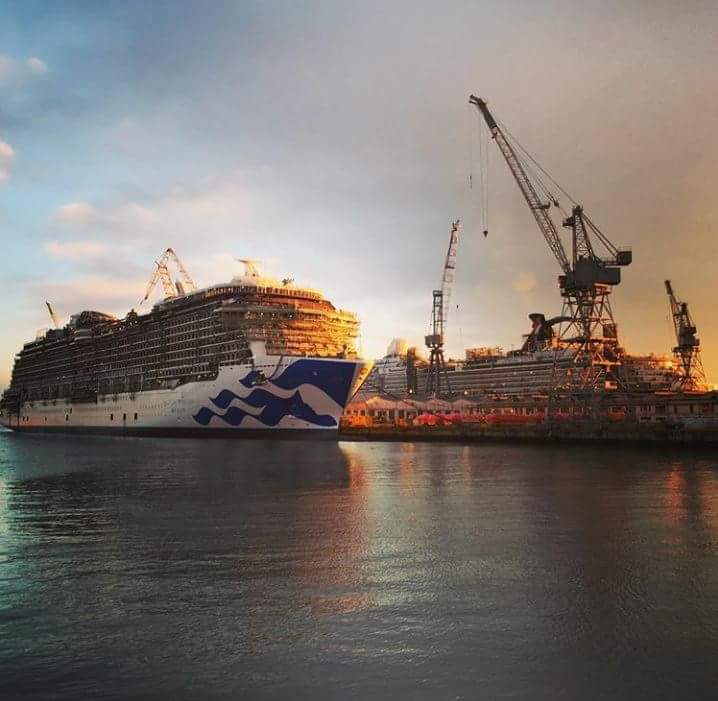