Latest Carnival Cruise News With a Sprinkle of Festive Joy! 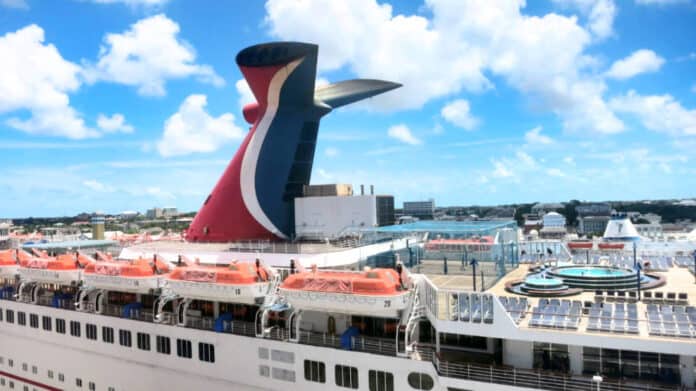 Here is all the latest Carnival cruise news and for once, there are more ups than downs. The cruise line has had a positive December with festive joy spreading across the fleet.

Much of that had to do with the approach of the festive season, of course. Not only did Santa Claus get to go for a ride on Bolt, Mardi Gras‘ first rollercoaster at sea, but the Grinch also delivered Christmas cards to the crew onboard the Carnival ships, courtesy of John Heald. We also had a festive message from President Christine Duffy.

Let’s not forget that we now have three vessels on the east coast, and two vessels on the west coast, while Mardi Gras has been officially handed over. The bad news? One Carnival ship’s voyages in Australia have been suspended even further.

Cruise Hive readers can also get updated on all the major cruise headlines from the past week below:

One of the largest and most environmentally friendly ships in the world, Mardi Gras, has finally been handed over by Finnish shipbuilder Meyer-Turku to Carnival Cruise Line.

After many delays and multiple issues due to the Coronavirus pandemic, Carnival could finally take possession of the vessel. Mardi Gras is now underway to Rotterdam and Barcelona, where crew changes, bunkering, and provisioning will occur before she sets sail towards the United States.

Mardi Gras‘ first sailing will be on April 24, which will give the cruise line ample time to get the vessel and crew ready for the regulations and protocols the CDC requires all ships to go through.

Santa On A Rollercoaster

We all know the busiest time of the year is coming for Santa Claus. So, to see him taking time out of his busy schedule to go for a ride on Bolt, Mardi Gras’ first-ever rollercoaster at sea, was a delight!

Of course, luckily, the distance between the North Pole and the Finnish shipyard is not that great! What did Santa have to say? “Never in my wildest dreams would I think a rollercoaster could be on a cruise ship.  It’s something we’ll be talking about at the North Pole for a long time!”

Festive Message from Carnival CEO While The Grinch Shares the Joy!

More festive moments at Carnival as President Christine Duffy sent out her Holiday video to crew members worldwide. As was befitting this time of the year, it was a message of hopes and dreams. Duffy said, “as we head into the holidays and the new year, I wanted to take this opportunity to send each of you my very best personal wishes, for you, your family, and the future. Thank goodness 2020 is almost over.”

A holiday message from a much more unlikely suspect: The Grinch personally delivered more than 10,000 Holiday cards and wishes from fans, Carnival employees, police departments, and many more. The smiles onboard indeed showed that ‘Operation Happy Holidays’ from John Heald was a complete success.

Last but not least, Carnival fans on the West Coast can finally look longingly at two Carnival vessels.

Carnival Miracle has arrived at her berth in the port of Long Beach and can start making her preparations for her season. The vessel will be doing several 2-3-4 and 5-day voyages from San Diego and San Francisco, California, to Cabo San Lucas and Ensenada, Mexico.

Only one piece of bad news to mention this week, Carnival Splendor cruises departing between March 25, 2021, and April 19 will no longer take place while cruises onboard Carnival Spirit remain suspended through May 16, 2021.

All in all, we can certainly take one of the last weeks of 2020 as one where positive news for Carnival Cruise Line is firmly in the majority. In a year where this has rarely happened, it is a welcome break from the ‘new normal’.

You can stay up to date with all the latest Carnival cruise news on our dedicated section along with all the major cruise lines.