P&O Iona which will be the largest ever cruise ship built for the UK has reached a major construction milestone.

A keel laying ceremony was held at the yard which marks the start of the physical hull coming together. As tradition coins were placed down with the keel and the event was attended by the cruise line and shipyard executives.

The large block which was layered measures 21.5 meters in length, 19.4 meters in width and 9.8 meters in height. It weighs 461 tons and will make up a part of the forward ship.

We’ll start to see more large blocks come together through the year and eventually, P&O Iona will become one large cruise ship at a total of 180,000 gross tons. That will make her one of the largest cruise ships in the world and the biggest ever to be purpose-built for the UK market.

Take a look at this impressive time-lapse video of the construction of P&O Iona so far which shows one of the central parts of the ship already completed:

The ship will have a similar design to Mardi Gras, another huge vessel also ordered by the same parent company and operated by sister cruise line Carnival Cruise Line.

There are still some more major milestones to come including the ship floating out onto the water for the very first time and then fitting out all the interior spaces. Iona will be completed in Spring 2020 and feature over 15 venues to eat, eight specialty restaurants, more than bars, 18 whirlpools, three outside pools, one inside pool, places for adults-only and a lot more.

One of the main highlights of the new cruise ship is a large glass SkyDome which brings natural light is a central part of the ship. During the night, the space will feature performances under the stars and will also be a great place to relax onboard.

P&O Iona will have a guest capacity 5,200 and be fully powered by Liquefied Natural Gas (LNG) which is environmentally friendly. 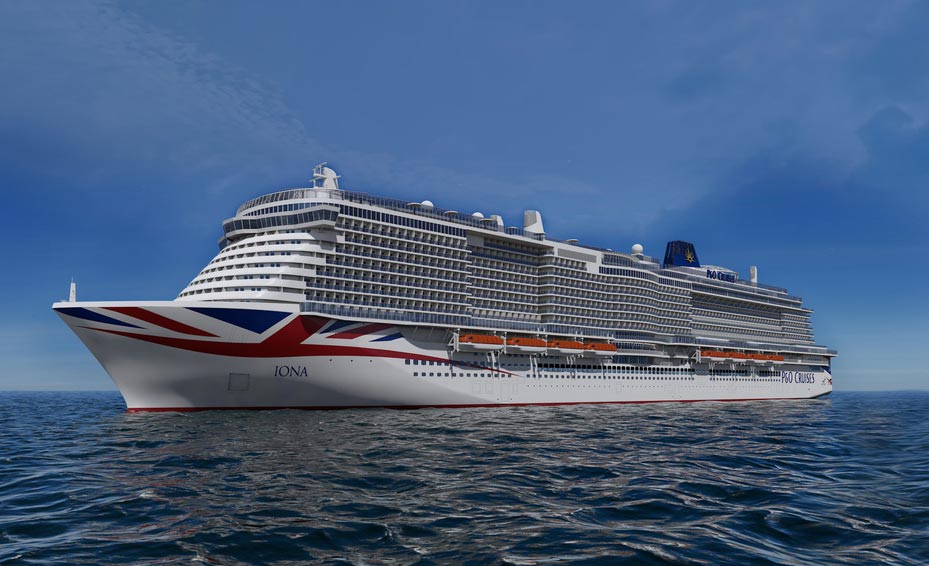