Carnival Cruise Line has celebrated a major construction milestone for the Mardi Gras cruise ship, the largest ever for the cruise line.

One of the most anticipated new cruise ships in the history of the industry has reached a major construction milestone at the Meyer Turku shipyard in Finland. A traditional ceremony was held at the shipyard to mark the beginning of the hull assembly which was attended by Carnival and shipyard personnel involved in the Mardi Gras development.

Coins were placed into one of the ship’s huge blocks to provide good luck. You might know this as the keel laying ceremony which we’ve posted about a lot on Cruise Hive when cruise ships are under construction.

“We have been very excited to design and now finally to start assembling Carnival Mardi Gras. All these different features onboard require a lot of engineering and design expertise which we have been happy to provide to our customer.”

Now begins the really interesting phase of construction where all the huge blocks start to come together. We’ll soon start to see an actual cruise ship over the coming months. The important engine room block also recently made its way to Meyer Turku after being constructed at the Neptun Werft yard, in Rostock, Germany.

This is just one milestone of many and the next highlight will be when Mardi Gras floats out onto the water for the very first time as one cruise ship. The ship will likely then shift to an outfitting pier where all the interior spaces will start to be worked on. Usually a month before the vessels maiden voyage all the crew members will begin to arrive to get the huge new mega-ship ready for the first guests at the end of August 2020.

You can also browse some photos from the event at the Meyer Turku shipyard which took place today:

Ceremony at Meyer Turku Shipyard
1 of 4

There is huge excitement around the Mardi Gras as a new class vessel for Carnival Cruise Line and the largest in the fleet once she arrives in 2020. The ship will introduce new features and layouts not seen on any other Carnival cruise ship.

One of the biggest highlights of the ship is the world’s first roller coaster at sea called Bolt. There will six themed zones of the ship including Ultimate Playground, The French Quarter, Grand Central, La Piazza, Summer Landing, and Lido. You can find out what’s included in each zone right here.

Once completed Carnival’s new mega-ship will be 180,000 gross tons, making her among the largest in the world. There will a guest capacity of 5,200 but way more than that a maximum occupancy. 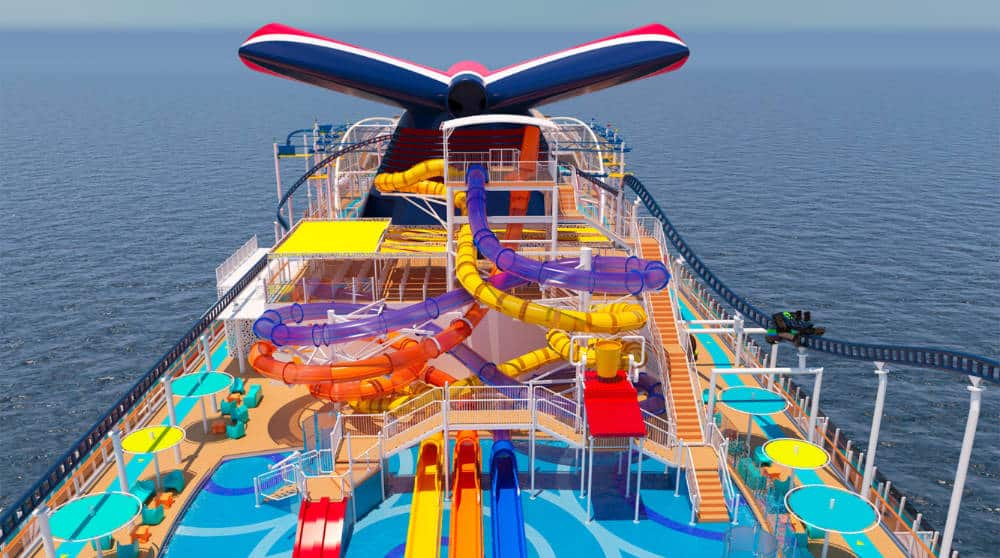