The keel has been laid for Mein Schiff 2, a German-based cruise ship for TUI Cruises.

Hull construction has officially started on Mein Schiff 2, a new cruise ship which will arrive for TUI Cruises in 2019. The keel was laid on Thursday at the Meyer Turku shipyard in Finland which is major construction milestone.

“It is always great to visit the shipyard and to see the progress with our coming ships. With new Mein Schiff 1 and 2 we will get two great new ships to lead our fleet in the coming years. We are very happy to see how these ships are taking form”.

“We have just floated out the newly developed New Mein Schiff 1 and begin directly assembling its sister, New Mein Schiff 2, from pre-produced grand blocks. It shows the increasing pace that we are working at, while at the same time implementing our large investment program with the large goliath gantry crane being only one example of it.”

“Working on our ships and our capabilities will prepare us for the increasing international competition. The process of lifting the crane is quite interesting: we will first lift the first leg in two weeks’ time, followed by the second shortly after. It sounds very simple but the crane’s beam’s own weight is 2500 tons and still the main crane beam is lifted by the crane legs to the height of over 100 meters in early November”.

Mein Schiff 2 will still have more major construction milestones to come including the float out onto the water for the very first time and the fitting out phase. Once in service, the ship will cater for the German market and offer a rock climbing wall and more. 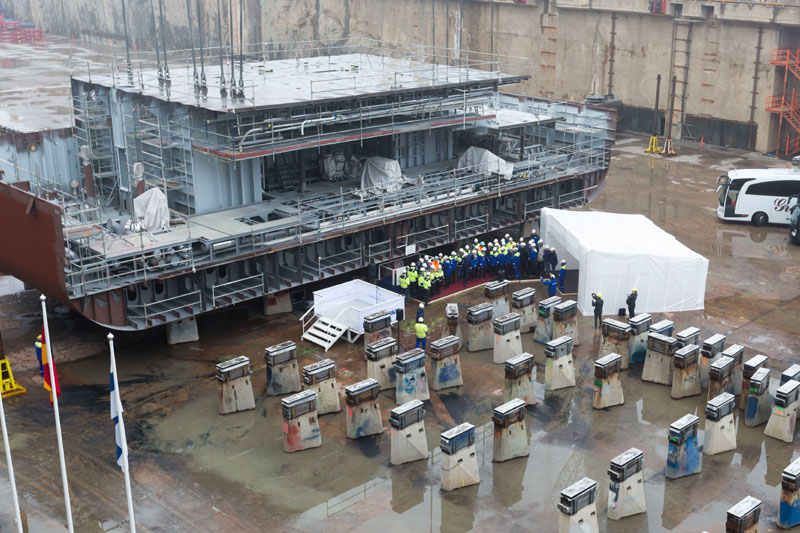