It’s a Huge Day for Carnival Cruise Line in California

New years day is huge for Carnival Cruise Line with the entrance of Carnival Panorama in this year’s Rose Parade held in Pasadena, California. The cruise line is showcasing the new ship which will begin cruise from the west coast later in the year. The Carnival AirShip has also arrived to begin its tour of the state.

Carnival in the Rose Parade

The Miami-based cruise line for the first time ever is getting involved in the 2019 Rose Parade which is held in Pasadena, California. Carnival and a dedicated team of amazing volunteers have spent days preparing the Carnival Panorama float for today’s parade.

The float is a detailed replica of the third Vista-class cruise ship which will begin sailing from the U.S. west coast later in the year. The float includes tens of thousands of flower petals and some signature features such as the iconic Carnival funnel, lido deck party and water park. The ship will be the first to introduce a Sky Zone trampoline park at sea and they’ll be showcasing this on the float.

Tomorrow is full of firsts: Carnival in the Tournament of Roses – Rose Parade , a float with a Sky Zone trampoline, and the Carnival AirShip arriving in California! #ChooseFun #CarnivalPanorama

The actual cruise ship will debut on December 11 with a one-time three-day cruise from Long Beach, California. The ship will launch year-round Mexican Riviera cruises on December 14 offering 7-day sailings. The ship is still under construction in Italy.

The Carnival float will debut in front of more than 700,000 onlookers along with an estimated 80 million television viewers. The route will is for five miles and no doubt everyone will enjoy watching the fun ship float/

To make the day even more special Carnival Cruise Line’s popular AirShip is arriving in California for the very first time and just in time for the Rose Parade.

The AirShip which has already done a tour of the U.S. southeast in 2018 will now begin a month-long tour of California. The Airship has already arrived in the state and will make an appearance up above on January 2 for the Rose Parade: A Showcase of Floats.

On January 5 the AirShip will be above Carnival’s homeport in Long Beach. The Blimp will be in Sandiego on January 13 and then San Fransisco on January 25 which Carnival Miracle will be based from in 2020.

“The Carnival AirShip was so well received when she debuted earlier this year, and we’re delighted to bring her back to the West Coast to kick start our year-long celebration of Carnival Panorama. It’s officially go-time!”

“Carnival is the number one cruise line from Southern California. Our AirShip is a great way to let everyone know about the many exciting choices for guests to Choose Fun from the West Coast.”

What’s really important about the AirShip is that Carnival will be making a $2 donation to longtime charity partner St. Jude Children’s Research Hospital each time someone posts a photo of the Blimp using hashtag #choosefun. There is a maximum donation of $20,000.

Do keep an eye open for the Carnival Panorama float and the Airship if you’re in the region. It will be a busy year for the cruise line on the U.S. west coast. 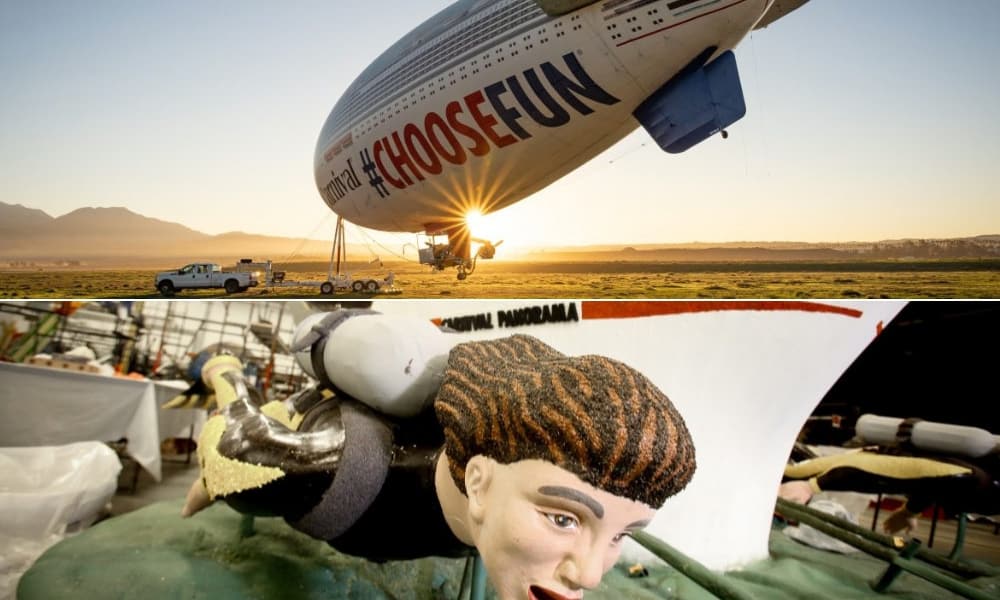