7 Impressive Things About Royal Caribbean’s Allure of the Seas

Originally unveiled in 2010, the Royal Caribbean Allure of the Seas was the largest cruise ship until 2016. Read more to see if this is the right ship for you.

The Royal Caribbean Allure of the Seas cruise ship is an Oasis-class cruise ship, once known as the largest passenger ship in the world, as of the ship’s launch in November 2009. However, the ship would later be surpassed in size by sister ship Harmony of the Seas, in 2015.

That hardly means that the vessel is not impressive, though. At barely 10 years old, the ship is still fairly new, with plenty of attractive features and activities aboard the ship that make it appealing to a variety of cruisers.

Allure of the Seas was on Royal Caribbean’s schedule to upgrade in the near future, under the cruise line’s Royal Amplifications project, but those upgrades were postponed due to COVID-19 impacts and shipyard closures. The postponement is in effect until further notice. Planned upgrades had included the addition of around 50 new passenger cabins.

However, Allure of the Seas hasn’t gone her full decade of existence without any changes. In 2014, the ship was in need of some repairs and, during that dry dock, the cruise line installed new carpeting and upgraded some of the guest facilities. In 2015, a more extensive refurbishment occurred, adding new dining options, upgrading cabins and adding some new tech services.

If you’re thinking about taking an Allure of the Seas cruise in the future, then you’ll want to learn as much as possible about the ship ahead of time, so you can take full advantage of all it offers. Here’s everything you need to know about this huge cruise ship and Royal Caribbean’s Oasis-class experience, before you embark on your next voyage.

1. Royal Caribbean didn’t actually intend for Allure of the Seas to be the largest passenger vessel ever

While the ship debuted as the largest passenger vessel in service in 2009, surpassing sister ship Oasis of the Seas, that wasn’t exactly the intent. In fact, she was planned to be the same exact size. However, when Allure of the Seas was finished, the ship was discovered to be a mere two inches longer than Oasis of the Seas, giving Allure the designation as the largest passenger ship in the world.

How did something like this happen? According to the builders at the shipyard, STX Europe Turku Shipyard in Finland, minute differences such as this can occur due to simple variations, like the temperature of the steel used to build the ship.

Allure of the Seas’ displacement (a ship’s weight based on the amount of water its hull displaces) is equal to Oasis of the Seas’ — approximately 100,000 metric tons. To give you an idea of what that means, that’s only a little bit lighter than the weight of an aircraft carrier. The steel hulls of the ships make up over half of this weight.

2. With all that space aboard Allure of the Seas, there’s plenty to do

As you might expect, if you have the world’s largest (at one time) passenger cruise ship, then you have to fill up all that space with tons of fun things for cruisers to enjoy, and Royal Caribbean certainly did that when it came to Allure of the Seas.

What can you find aboard this behemoth ship? How about a two-deck dance hall? A theater that seats nearly 1,400 people? An ice skating rink at sea? More than a half-dozen neighborhoods all scattered across the ship?

And that doesn’t even touch all of the amazing dining options, bars and other entertainment venues.

3. The ship offers something for every type of cruiser

With the Royal Caribbean Allure of the Seas ship, however, the way it’s designed makes it possible for any kind of cruiser to find something to enjoy and love, whether you’re a traveling multigenerational family, a couple, a group of friends or anyone in between.

This is partially thanks to the way the ship is split into those seven different neighborhoods, each with their own distinct feel.

On some cruise ships, you simply don’t get that many dining options included in your cruise fare. You may be relegated to dining only in the main dining room(s) if you want to save cash, and then, those meals might not even be that impressive.

That’s certainly not the case aboard Allure of the Seas, however. The complimentary dining is expansive, with 15 different options for cruisers who aren’t ready to splurge on the fee dining options. And the best part? Everything is high-quality, varied and delicious, so you’ll never even miss out on that for-a-fee dining, if you’d rather avoid it.

5. Paid dining options are definitely worth the splurge

Don’t expect “blah” cruise line food aboard a Royal Caribbean Allure of the Seas cruise. Royal Caribbean really pulls out all the stops when it comes to putting together high-end dining experiences that impress. So, while you definitely don’t need to pay extra to enjoy a nice meal on this ship, if you want to splurge a bit, we certainly wouldn’t blame you.

The ship’s for-a-fee dining options range from casual eateries to fine dining venues, and they’re scattered all across the ship’s seven neighborhoods.

Izumi serves up hibachi eats (and, if you sailed on Allure of the Seas in its earliest days, you’ll now notice Izumi has moved to a new location). Starbucks, of course, gives you your daily coffee fix. Johnny Rockets serves up paid lunch and dinner after the complimentary breakfast hours are over.

Sabor Taqueria is a new Mexican eatery on the ship that replaced the older Rita’s Cantina. Cups and Scoops is an ice cream and candy shop. Chops Grille is a steakhouse, as you probably guessed. Vintages is a wine and tapas bar. Giovanni’s Table is an Italian, family-style restaurant. Samba Grill is a Brazilian-style restaurant inside the adults-only Solarium.

For the most elegant dining experiences aboard Allure of the Seas, you’ll want to book your spot either at 150 Central Park, where the seasonal menus offer six-course tasting experiences, or The Chef’s Table, a newer, intimate, five-course dining experience that you enjoy alongside 13 of your fellow passengers.

6. Endless fun awaits, no matter what your idea of fun is

We already mentioned how Allure of the Seas offers something to do for every cruiser, but let’s get into the specifics. What can you expect when you spend a sea day aboard this mammoth ship?

If you’re the type who likes high-flying adventure, you’ll enjoy the complimentary zip line rides, ten decks above the ship’s Boardwalk. If you’ve always wanted to try rock climbing, head over to the ship’s rock limbing wall and climb 40 feet above the deck. Want to try surfing? You can do that, too, thanks to the fun FlowRider surfing simulator.

Of course, more splashin’, surfin’ fun can be had at the H20 Zone Water Park for kids. There are three main pools in total on Allure, on Deck 15, including a main pool, beach pool and sports pool. The main pool and beach pool are most popular. An additional pool is in the Solarium and is dedicated to adults only. Two hot tubs flank the Solarium.

Very few cruise lines can compete with Royal Caribbean when it comes to kids activities. If you have an adventurous tot or a too-cool-to-hang teen, or any age of child in between, they’ll be set with full itineraries of fun.

A 29,000-square-foot Adventure Ocean youth center offers various areas of fun that are split into age categories. Kids programming is free for kids ages thread older, too, so you don’t have to worry about any extra cost. Kids camp programming runs from as early as 6:30 a.m. to as late as 10 p.m., and includes meals, so you know your tots are always being watched over,  no matter what the older travelers in your group are up to.

If you want to hang with your kids, though, you will plenty of activities that welcome parents, too, from movies to science experiments.

Allure of the Seas FAQ:

How big is the Allure of the Seas Cruise Ship?

How many swimming pools are on Allure of the Seas?

There are three main pools in total on Allure, on Deck 15, with a main pool, beach pool and sports pool, alongside a kids’ H20 Zone. The main pool and beach pool are most popular. An additional pool is in the Solarium and is dedicated to adults only. Two hot tubs flank the Solarium.

How many passengers are on Allure of the Seas?

At double occupancy, the ship hosts 5,484 passengers. Maximum occupancy is 6,780 passengers along with 2,200 crew members.

What other cruise ships are the same class as Allure of the Seas? 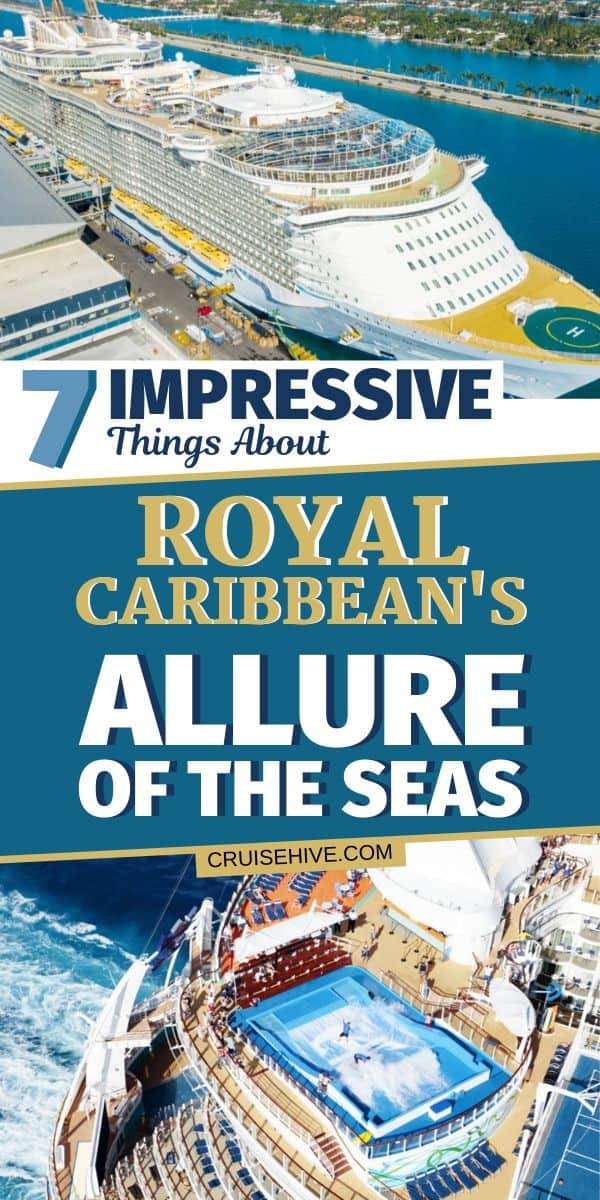