A giant gingerbread version of the Carnival’s Mardi Gras cruise ship has been made and now on display at Atlanta Mall.

Carnival Cruise Line has created a huge 23-foot-long gingerbread replica of the new Carnival Mardi Gras cruise ship which will debut in August 2020. The creation is in partnership with Atlanta Culinary artist Karen Portaleo.

the replica weighs 1,500 pounds and is currently docked at Atlanta’s Lenox Square Mall. Portaleo also served as the godmother of the unique cruise ship! The Food Network star smashed a ceremonial bottle across the vessel’s bow on Saturday.

“I’ve created hundreds of cakes during my career but a 1,500-pound gingerbread cruise ship is certainly a first for me.”

“As a baker, I’m always looking for a challenge and creating a gingerbread replica of Mardi Gras was an amazing experience as it serves as a fun conversation piece for thousands of holiday shoppers. I can’t wait to see the real Mardi Gras when it debuts next year.”

The gingerbread Carnival cruise ship is made up of 130 pounds of flour, 10 pounds of cinnamon, and 50 gallons of icing. The replica even features the first roller coaster at sea and a water park.

“Carnival is all about bringing fun and memorable vacations to more than five million guests who sail with us every year.”

“And what better way to ring in the season and bring fun to holiday shoppers than with the world’s largest gingerbread ship! If they like this version of Mardi Gras, they’ll be blown away when the real deal arrives next year.”

The gingerbread ship will remain at the mall through December 24. We’ll just have to wait for the real version of Mardi Gras which is currently under construction at the Meyer Turku shipyard in Finland and will debut from Copenhagen on August 31, 2020.

She will be the largest cruise ship ever built for the Miami-based cruise line at 180,000 gross tons and feature the BOLT roller coaster which is the first at sea. 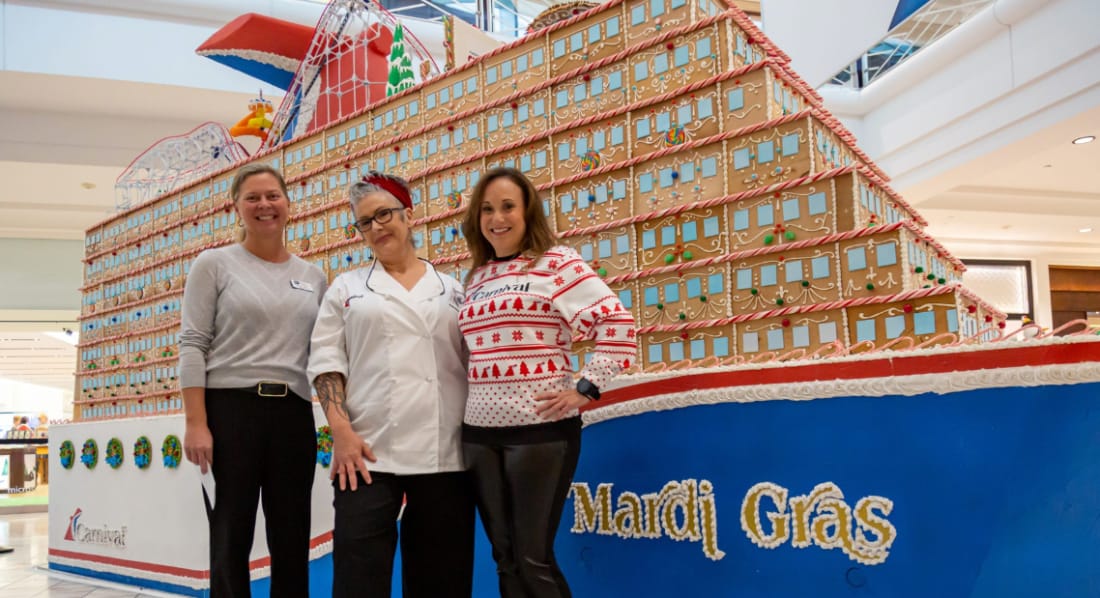