Holland America Line And Seattle Are A Perfect Match

As Holland America Line begins the Alaskan season from Seattle it continues a perfect match between city and the cruise lines home base.

The Westerdam arrives at the Port of Seattle Saturday, May 2, 2015, marking the start of the city’s summertime Alaska homeport cruise season. The line added capacity to its roundtrip Seattle routes with an additional ship in 2015: ms Statendam arrives Monday, May 18 and ms Amsterdam arrives Sunday, May 31 to begin their Alaska sailings from Seattle.

In addition to the 47 roundtrip Seattle cruises to Alaska this season, four cruises sailing the Panama Canal or Hawaii/South Pacific will either begin or end at Seattle, including a departure aboard ms Volendam. A three-day Pacific Northwest cruise aboard ms Noordam makes a visit to Seattle in September. All of the options combined make a total of 52 calls by five ships that welcome 82,996 guests to Seattle.

“As a Seattle-based company, we always get excited to welcome our ships back to Seattle to begin the Alaska cruise season,” said Orlando Ashford, Holland America Line’s president. “We live and work in the Puget Sound area, so we’re extremely proud of the significant contribution we make to the region and to the local and state economies.”

In the coming year, Holland America Line expects to contribute $422 million to the Seattle economy and $577 million across Washington State.  The cruise line employs 1,263 people at its Elliott Avenue headquarters in Seattle.

Provisioning costs each time a ship calls in Seattle average about $275,000 per visit. Holland America Lineworks with 600 Washington vendors, from food and beverage suppliers to piano tuners, office supply stores and marine suppliers, among many more.

Holland America Line provisions each ship on “turnaround” dates.  Provisioning a ship means bringing aboard all of the supplies and food products needed during a cruise. For example, Westerdam requires over 23,000 eggs and 1,375 gallons of milk each week — all coming from local farmers. In addition, local growers supply 147,550 pounds a week of fresh produce.

Also contributing to Holland America Line’s economic impact is spending by passengers and crew in local shops, restaurants, hotels, museums, attractions and taxis. Other expenditures include maintaining its ships, plus port fees, charges and taxes. 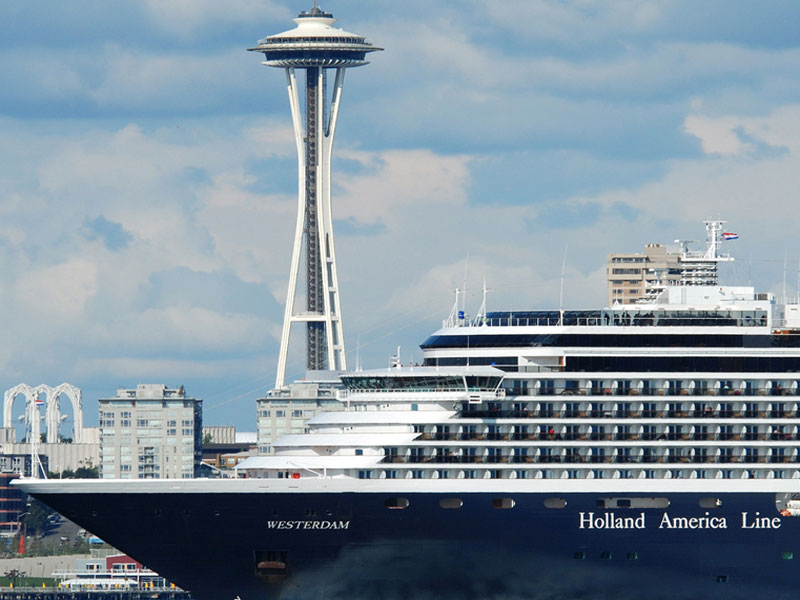