Harmony of the Seas Arrives In Southampton, UK

The world’s largest cruise ship arrived in Southampton, UK today for the very first time. Harmony of the Seas early morning arrival at the British port was huge with many people getting a view of the new biggest cruise ship ever built.

The 227,000 gross ton vessel will sail a series of short cruises from Southampton to showcase all the stunning features onboard. Those lucky enough to be cruising on the ship will include travel agents and cruise professionals along with passengers who will be among the first in the world to experience the third Oasis class.

“Harmony of the Seas is redefining vacations and intriguing a new generation of travellers with a bold and unexpected line-up of first at sea innovations, while enticing them to explore the world from a new perspective, from thrilling onboard activities and experiences to visiting awe-inspiring destinations across the Mediterranean and the Caribbean, Harmony places guests at the forefront and encourages them to create their own adventures onboard and at every destination.”

The ship will depart Southampton on May 22 for a 4-day cruise to Rotterdam, Netherlands. The second sailing out of the city will be on May 26 with a 3-day voyage to Cherbourg, France. Harmony of the Seas will then depart on its final voyage from Southampton on May 29 to its new home port in Barcelona, Spain.

Watch as Harmony of the Seas arrives at the Port of Southampton, UK:

Harmony of the Seas was just delivered to Royal Caribbean days ago at a grand ceremony onboard the ship. The ceremony honored all the crew of the world’s largest cruise ship while it was still docked at the STX France shipyard in Saint-Nazaire, France.

The unparalleled cruise ship and her 2,100 dedicated crew members then will officially launch her inaugural summer season with the first of 34 seven-night western Mediterranean sailings on June 7.

In November 2016, Harmony will arrive at her home port of Port Everglades, Fort Lauderdale, Fla., from where she will offer seven-night Eastern and Western Caribbean sailings. The newest member of the fleet will join sister ships Oasis of the Seas and Allure of the Seas, homeported in Port Canaveral and Port Everglades respectively, on the east coast of Florida.

If you’re interest in sailing on harmony of the Seas then take a look at the latest Cruise Deals for the ship. 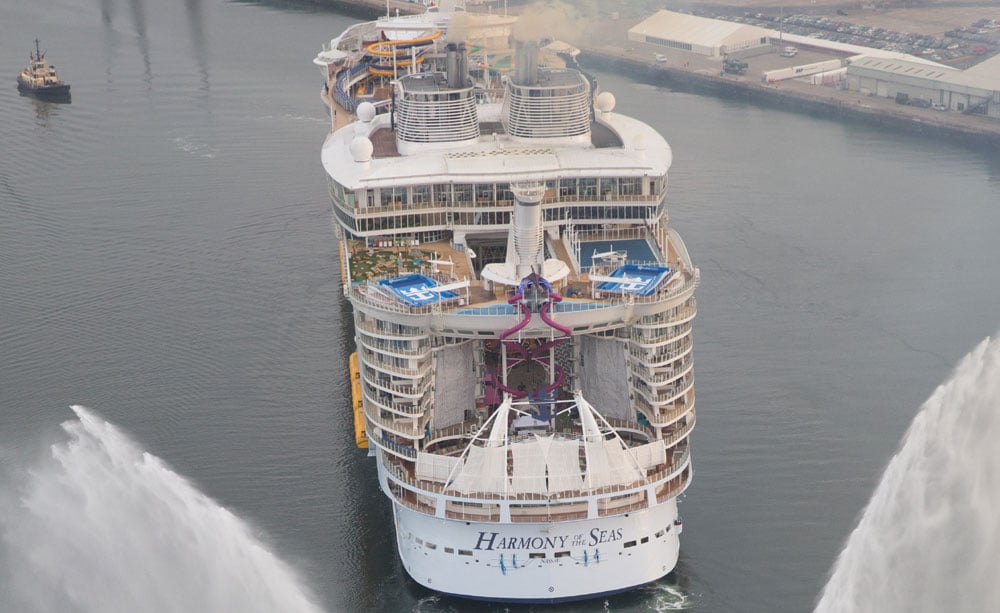