Ground Broken for New Cruise Port in The Bahamas

Calypso Cove on Long Island is officially under construction and will bring a new port of call to The Bahamas. 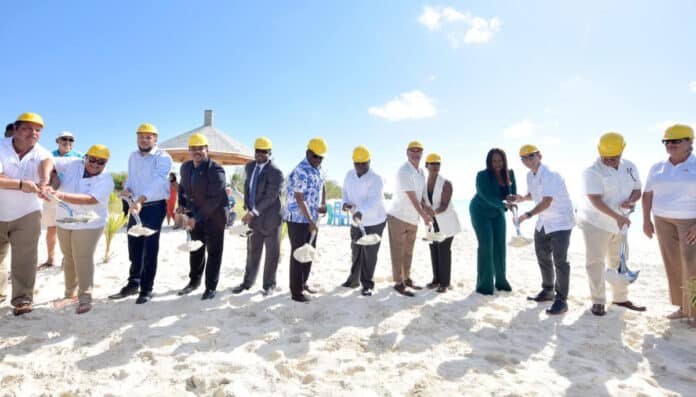 Cruise travelers will soon have a new destination to explore in The Bahamas, as AZUL Destinations has broken ground on Calypso Cove, the new $250 million (USD) resort and cruise port on south Long Island. Expected to be completed over two years, the new port will be able to accommodate even the world’s largest cruise ships.

Calypso Cove is now officially under construction as the ceremonial ground breaking took place on Monday, December 19, 2022. According to The Tribune, the ceremony was attended by various local officials, and marks a great moment that will bring many opportunities to residents of Long Island.

“I am happy because something is happening for south Long Island after all these decades,” said Chester Cooper, Tourism, Investments and Aviation Minister.

The development project is expected to employ 300 people during the construction phase, and of course many more will be employed once the facilities open. The project, which was just agreed upon in October 2022, is being undertaken by a consortium of Azul Destinations of Brazil and independent developer Calypso Cove Destinations.

Calypso Cove will include not only a cruise dock capable of supporting the world’s largest ships – currently Royal Caribbean International’s Oasis-class vessels – but also a variety of other attractions.

Included in the plans are casinos, an 18-hole golf course, a rock climbing wall, zip line, water park, retail spaces, restaurants, space for shore excursions to depart, beach facilities, and more. If the port is selected as a cruise ship homeport, a 200-bedroom hotel will be a convenient option for pre- and post-cruise stays.

A new airport is also planned, which will spark even further development of the island to attract visitors and to encourage local residents to further invest in their home.

“An airport coupled with this project here today will result in new businesses throughout the island from construction to Airbnbs and other bed and breakfasts, to restaurants to retail, tours and to various new investments,” said Adrian Gibson, parliament member from Long Island.

“We will also see many Long Islanders returning home, staying home after graduating high school and returning to invest in this island.”

Environmental studies have been completed to ensure that local natural habitat is preserved, and different steps are being taken to ensure the project is a success not only for visitors, but for residents as well, which will make the destination a lovely option to explore. Nature trails are included in the development plan.

Long Island is considered the most scenic island in The Bahamas, making it a highly desirable destination for travelers eager for a tropical getaway. With a population of just over 3,000 residents, the 230-square mile (596-square kilometer) island has plenty of unspoiled places and is free from larger crowds.

By comparison, New Providence, the island where the country’s capital city Nassau is located, is only 80 square miles (207 square kilometers), but has a population of approximately 275,000 residents.

Long Island is located approximately 200 miles (322 kilometers) southeast of Nassau, making it a more southerly destination for cruise ships, but easily en route to other popular ports such as Grand Turk, the Dominican Republic, Puerto Rico, and the Virgin Islands.

Calypso Cove is being constructed on the island’s southern tip, south of Clarence Town, which has been used periodically as a port of call by Celebrity Cruises.

Which Cruise Lines Will Visit?

While cruise lines have not yet added the as-yet-unbuilt port to their Caribbean itineraries, the dock planned at Calypso Cove will be able to welcome ships of all sizes.

Developers anticipate as many as one million cruise passengers may visit Calypso Cove each year once the development is complete.

Because the planned dock can accommodate two ships at once, multiple cruise lines may be visiting simultaneously, and the port is sure to draw interest from all major cruise lines as well as smaller, luxury lines dedicated to bringing their guests to new and relaxing destinations.