Grand Turk port is back open for business with the first Carnival cruise ship making a return.

The popular cruise ship port for Carnival Cruise Line has opened back up for business yesterday. Carnival Ecstasy was the first vessel to arrive and dock in Grand Turk as part of a regular itinerary. The Fantasy-class ship called at the island as part of a 7-day sailing from Charleston.

A ceremony was held onboard which was attended by officials from Carnival Corporation, Grand Turk port, ship officers and the local Government. The opening of Grand Turk reaffirms that the Caribbean is back open for business since Hurricane Irma and Hurricane Maria hit in September and causing major damage.

Carnival Ecstasy First Ship Back at Grand Turk
1 of 6

Carnival fantasy spent a day in Grand Turk so passengers could enjoy the stunning views on the island which is located in the Turks and Caicos. Grand Turk offers an 800-foot long beach, a shopping complex, restaurants, bars and even a FlowRider attraction.

The 60 million dollar destination which was opened by Carnival in 2006 will now welcome more ships as cruise itineraries return to normal. Other major cruise destinations of Puerto Rico, St. Thomas and St. Maarten are also opening back up as the Caribbean recovers and readies to welcome thousands of cruise ship passengers daily. 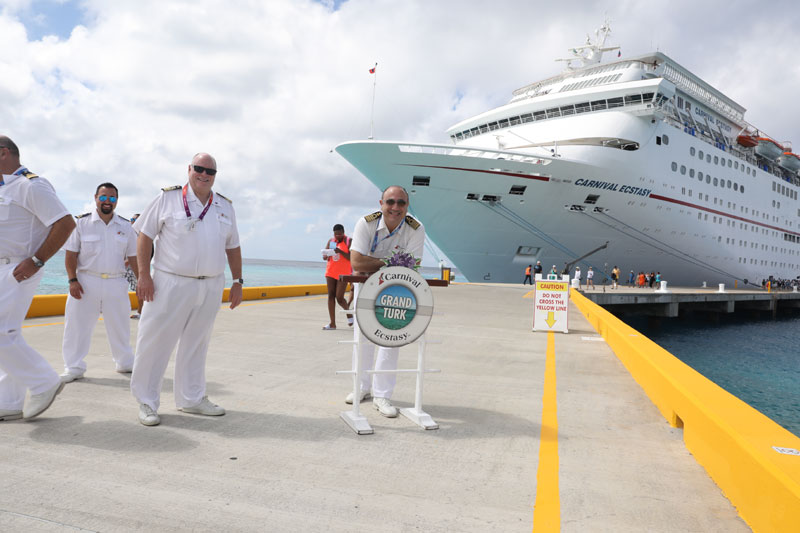