We’ve all heard of the Oasis class cruise ships from Royal Caribbean but how about the 206,000 Global class cruise ships by Genting’s Dream Cruises? Construction has officially started on the first ship in this new mega design and once complete will be the second largest class in the world!

Further details have also been revealed about these new ships, including 8 sets of public escalators which guest can use to get around the ship! Let’s take a look at the first steel cutting and Global class details below.

We first posted about the order of two Global Class cruise ships by Genting in 2016. The order was previously for sister cruise line Star Cruises but they will now be part of Dream Cruises instead and the tonnage has been revealed as 204,000 gross tons.

The first piece of steel was cut for the future cruise ship during a ceremony on March 8 at the MV Werften Wismar yard in Germany. Those from Dream Cruises parent company Genting and the shipyard attended the ceremony which is the first major construction milestone out of many. You’ll be interested to know that the Global class vessel will be built at the Wismar and Rostock shipyards during the early stages but the blocks will come together at Wismar which is located in Northern Germany on the Baltic Sea.

“After designing the Global Class ships for the last three years and investing over 210 million euros to make MV WERFTEN the-state-of-the-art cruise shipbuilding yard in the last two years, we are very pleased to finally start construction on the first Global cruise ship today.”

“These ships are not only the largest cruise ships to be built in Germany; they are also the most technologically advanced with artificial intelligence. The Global Class ships will follow the embrace of Asians of artificial intelligence in their daily lives, with facial and voice recognition for most services onboard and robots to perform mundane tasks, allowing the crew to focus on service delivery”

So this mega ship will be 204,000 gross tons once completed at the end 2020, only the Oasis-class ships from Royal Caribbean will be bigger. The yet to be named ship will accommodate around 5,000 passengers in 2,500 cabins on a double occupancy basis.

The ship will be 342 meters long and 46.40 meters wide with a draft of 9.50 meters. This new generation cruise ship will also have 8 sets of escalators connecting the public areas and that’s in addition to the 28 large elevators! There are 600 different companies involved in build the ship which is just mind-blowing!

It’s going to be an impressive cruise ship which is being purpose-built for the Asian market. technology will be more important than ever where facial recognition will be used to reduce lines for Embarkation and Disembarkation. There will be Artificial Intelligence (AI) throughout the ship bringing a new experience for cruisers to enjoy their cruise vacation.

There will be a second Global Class cruise ship for Dream Cruises. Construction will begin in 2019 and it’s scheduled for delivery in 2021. The Asian-based luxury cruise line has plans on expanding to the U.S. East Coast by the time the second vessel arrives. Dream Cruises already has Genting Dream which joined the fleet in 2017 and their first cruise ship World Dream which began sailing in 2016. parent company Genting also owns Star Cruises which is based in Asia. 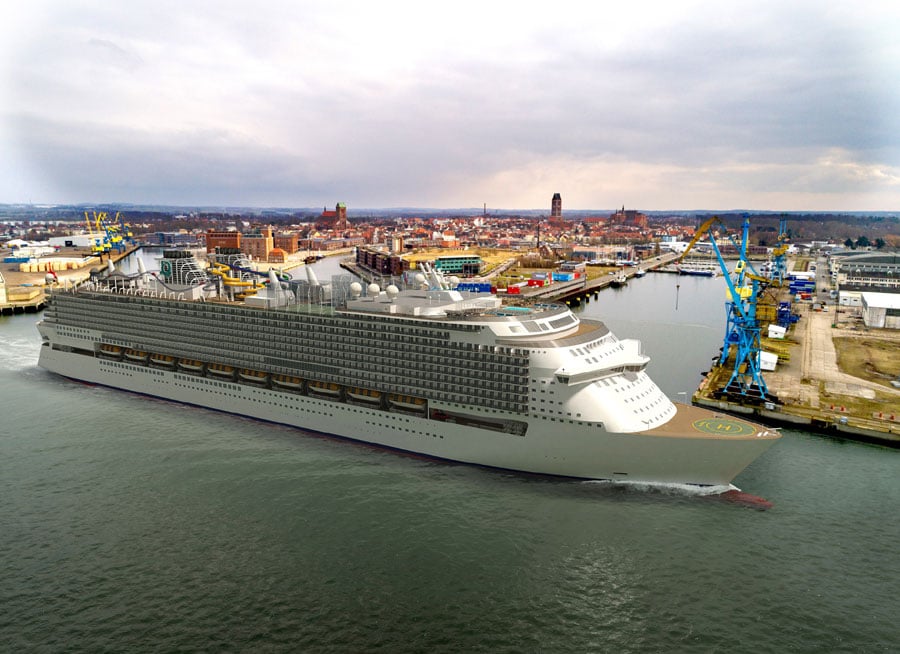