A girl who was sliding down a cruise handrail on the ships stairwell has received millions of views! This could possibly be the biggest fail ever onboard a cruise ship!

The girls were cruising on board a ship for spring break two months ago when they decided to be a bit adventurous by sliding down the ships handrails on the stairwells. The girls were taking a toilet break from being in the on board club called Dazzles. 17-year-old Annie Schwenker from South Carolina also decided to slide down one of the handrails but she lost balance and fell backwards head first onto the lower stairwell. You can watch the short footage below:

CAN WE PLEASE MAKE THIS GO VIRAL #TBT #SPRINGBREAK2015 pic.twitter.com/vOS2nfrg9N

The video was posted by a friend named Maddie Frank who promised not to post the video after Annie fell. After a graduation barbecue Annie agreed to let Maddie post the footage which has now received over 22 million views on Facebook. Maddie can also be heard repeating to Annie “don’t fall off” but of course she still did! The video has gone viral and could just be the biggest fail on a cruise ship yet! Thankfully Annie is ok but did break a rib. According to Maddies twitter page many people thought that she fell to her death. Annie told Buzzfeed that she still went to the ship’s club after falling and didn’t feel the pain until on the dance floor. After the cruise she went to Hospital which was when she found out a rib was broken. We find it amazing how Annie could continue to enjoy the cruise and keep going.

PEOPLE ACTUALLY THINK I RECORDED ANNIE FALLING TO HER DEATH AND POSTED IT. @AnneSchwenker IS ALIVE SHE BROKE A RIB THAT WAS 2 MONTHS AGO!!!! — Maddie Frank (@MaddieFrankk) June 7, 2015

What do you think of this video? Feel free to post your opinions in the comments below.. 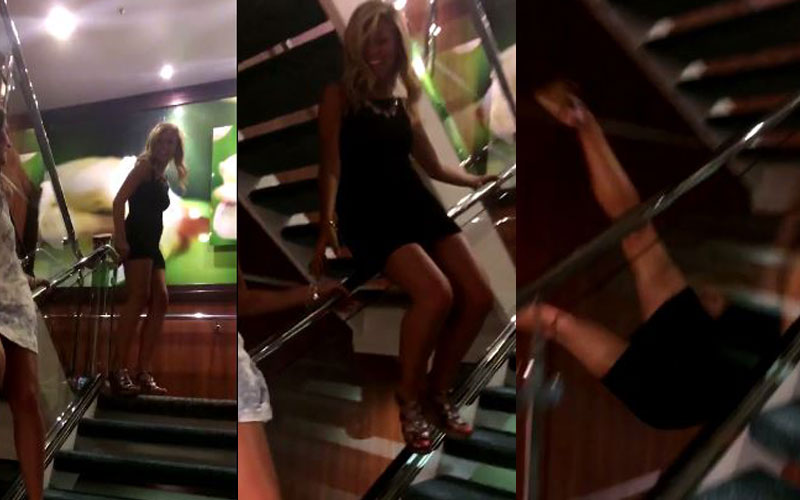