Carnival Cruise Line has announced that Jake Elliott from the Philadelphia Eagles and Carnival Horizon godmother Queen Latifah will go head to head with a Lip Sync Battle during the ships naming ceremony in New York.

Now this will be something worth watching as the two will battle it out when Carnival Horizon celebrates her naming ceremony in New York on May 23. They will both go ahead and take part in a special Lip Sync Battle held in the ships Liquid Lounge theater and attended by invited guests. The event will feature the cast of Playlist Productions which will bring the house down with the pair battling over today’s hottest tunes.

“At Carnival, we’re known for our fun and creative naming ceremonies and I’m delighted that Jake Elliott from my hometown Super Bowl champion Philadelphia Eagles lends even more star power to what promises to be a terrific way to name our newest ship, Carnival Horizon.”

Queen Latifah is the godmother of Carnival Horizon which we posted about right here. She is a Grammy-award winning musical artist and acclaimed actress who is well known all around the world.

Jake Elliott will be well known to fans of the NFL. The sports star joined the Philadelphia Eagles in 2017 following a career at the University of Memphis where he was named All-American after his junior season. During his first season with the Eagles he booted a franchise-record 61-yard field goal that is also the longest for an NFL rookie. He went on to help the Eagles secure their first-ever Super Bowl victory by hitting a clutch field goal with 1:04 left in the game. Elliott is also an active philanthropist, spearheading a T-shirt campaign around the Super Bowl with proceeds donated in memory of a former classmate whose family funds scholarships to students in the community.

“I can’t wait to crush it in Lip Sync Battle: Horizon – not only do I get to square off against a true legend like Queen Latifah, we’re also helping some very special kids from St. Jude in my adopted hometown of Memphis.”

So we already know the naming ceremony will take place when the ship is in New York on May 23, 2018. In addition to the Lip Sync Battle, there will be a major focus on Carnival’s main charity St. Judes Children’s Hospital. A check presentation will take place and the custom St Judes artwork will be unveiled on the “Dreamscape,” a stunning three-deck-high LED sculpture that takes center stage in the ship’s atrium.

The new Carnival cruise ship which is the sister ship to Carnival Vista which debuted in 2016 will begin a new season sailing from the Big Apple from May through September 2018. As of writing this, the ship is sailings its inaugural cruises in Europe after recently being delivered from the Fincantieri shipyard in Italy.

The Carnival cruise ship is 133,500 gross tons and has a guest capacity of over 3,900. Do check our dedicated page on the ship with price drops, features and more. 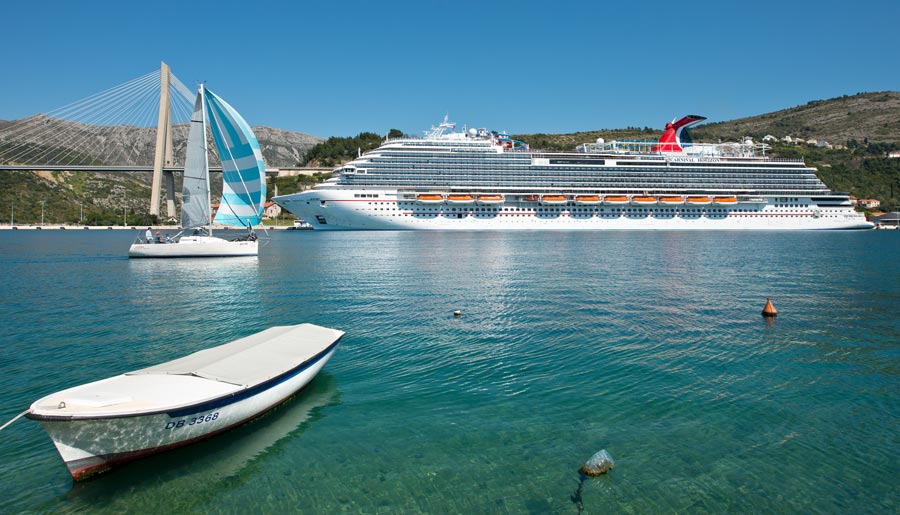