After the time-honoured exchange of gifts, guests were treated to an exclusive preview of Dream Cruises’ thrilling signature production show inspired by the hull art of Genting Dream, entitled “Voyage of a Lover’s Dream”. Conceived by pop-art artist Jacky Tsai, this is a tale of love, hope and the  overcoming of seemingly impossible boundaries between a mermaid and an astronaut.

“As the first-ever Asian luxury cruise line and the first luxury ship to make Guangzhou (Nansha) its home port, year-round, we are devoted to helping advance the cruise market in Southern China.”

“Our story here actually began in November 2015 when we chose Guangzhou (Nansha) to announce our new Dream Cruises brand. In a scant year’s time, and coupled with the recent homeport of SuperStar Virgo, we have seen passenger numbers grow to over 300,000 resulting in Guangzhou (Nansha) becoming one of the top 3 ports in China today,” he added. “I am truly grateful that we have been able to fulfill this dream of success together with the launch of Dream Cruises and the debut of Genting Dream.”

Also, as part of the company’s commitment to support the region, and especially its youthful dreamers, Dream Cruises also launched the “Dream Big” initiative, a new project developed by Dream Cruises to provide essential support to nurture talented children in the region.

Attendees at the opening ceremony were introduced to the first three highly gifted Chinese beneficiaries of the “Dream Big” program, each of whom has a unique talent and is following their dream to be the very best in their individual arenas. They included: Zhang Chuyi, a seven-year-old Chinese opera star from Zhengzhou province who has been singing since the age of four; 12-year-old artist Xiao Yan Lu who is already a master at Chinese painting and calligraphy; and Liang Wenfei, an energetic eight-year-old girl who has been part of the Guangzhou Yuexiu Youth Diving Team since the age of three.

The three inspiring youngsters were accompanied on stage by Genting Dream’s Godmother, Puan Sri  Cecilia Lim, and mentors including Chinese Opera genius Qiu Jirong, the founder of the Qiu school of Peking Opera; Mr. Jacky Tsai, the London-based Chinese pop artist whose beautiful artwork adorns the hull of the Genting Dream; and Miss Wu Minxia, who as an eight-time world and five-time Olympic champion is one of the most decorated divers in history.

Chinese government officials along with executives from Genting Hong Kong and Dream Cruises joined the group onstage for the official christening and Godmother’s blessing which was performed by the placement of a giant lotus flower, symbolising the company’s close ties and commitment to Asia, and the smashing of a bottle of champagne.

Following the launch ceremony, guests were able to experience a sumptuous lunch at one of the ship’s many fine-dining venues, and then embarked on a guided tour to explore the ship’s array of amazing attractions and amenities, including the extensive Dream Palace facilities, Zouk Beach Club, outdoor adventure zone, Crystal Life Fitness and Spa, ”Bistro” by Mark Best, JOHNNIE WALKER HOUSE and Little Pandas Club.

Later in the evening Genting Dream set sail for her maiden journey from Guangzhou (Nansha) on a 6-day voyage to Vietnam wowing local onlookers with “I love Guangzhou” emblazoned across her decks in a kaleidoscopic display of her state-of-the-art LED lighting system. 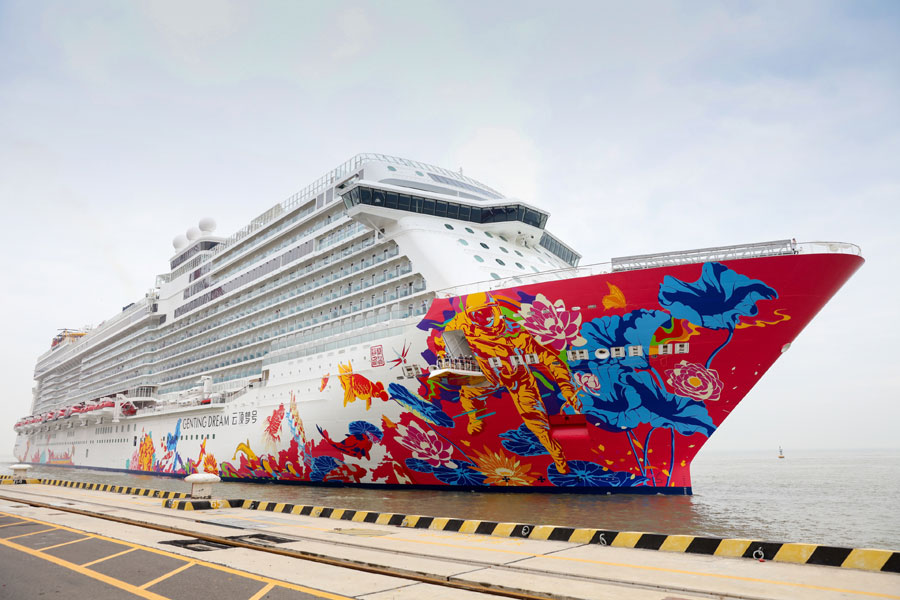