The photos are by cruise ship photographer Ian Hughes from when he worked on ships from the early 90s. He’s managed to get that perfect moment which now the entire web is enjoying decades later. The photos have become so popular that at the time of writing this it seems the photographer’s own web sites is down.

“As Cruiseship Photographers it was our job to photograph passengers in various locations on and off the ship throughout their cruise. We would print every picture and display them for sale in the onboard Photo Gallery. At the end of each cruise I would have a quick look through all the unsold pictures before they were thrown away and I picked out all the ones that caught my eye.”

Some of the ships included in the photos are of the S.S. Norway, S.S. SeaBreeze, MS Seaward, the Britanis and Crown Princess, Star Odyssey and Regal Princess. Whats different about these photos are the passengers featured in them. A range of funny shots have been caught on camera, some are just the opposite of how you would expect people to react at that moment. Some of them even look like well-known actors and singers, well we’ll let you decide..

Here’s Gandalf taking a break from middle earth with his very excited wife:

Come on Sir Elton, give us a song!

Jackie Chan taking it easy on his cruise holiday of a lifetime:

It’s going to be ok, you can go home soon:

Don’t worry you will have a great time!

Look it’s Mr Miami himself all ready to enjoy his cruise:

Here is Misty, we were wondering where she was:

Come on give us a smile!

She can’t be that bad!

He has a strong handshake!

The Not So Excited

We did have a laugh when we first came across these. These are just a few out of many photos now doing the rounds online. Do you have any similar photos from your cruise? If so feel free to post them in the comments below. 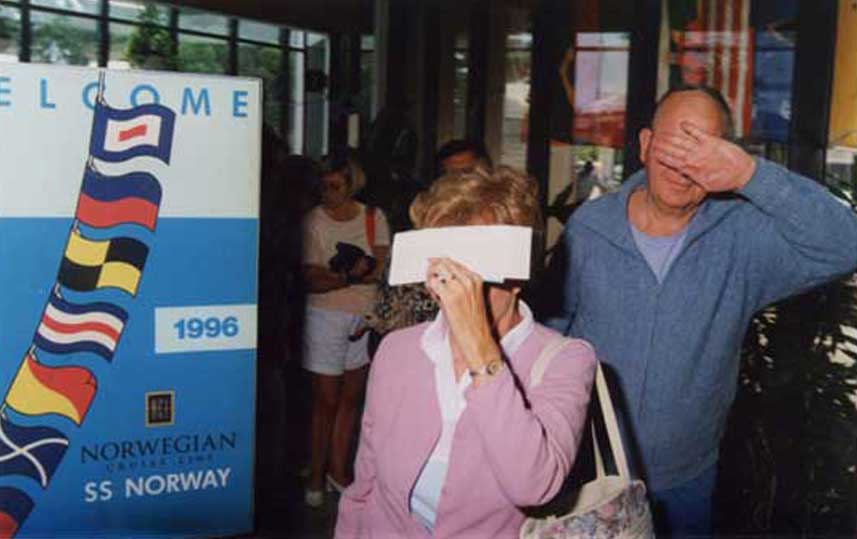 Where Do The Three Major Cruise Lines Stand on Vaccine Requirements?

U.S. Public Health Emergency Extended, How Does This Impact Cruises?