Another cruise ship has been beached at the Aliaga ship breaking facility in Turkey. A sad sight that seems to be growing...
Read more
Royal Caribbean

Royal Caribbean have announced that a fourth Oasis class ship has been ordered and to be delivered by 2018.

[quote_box_center]“The Oasis Class was a revolution in maritime design when it was launched in 2009. Oasis of the Seas and Allure of the Seas continue to be in a class by themselves both in terms of guest satisfaction and financial returns. Today’s announcement is a reflection of their success,” said Richard D. Fain, chairman and chief executive officer, Royal Caribbean Cruises Ltd. “We are thrilled to announce the order of a fourth Oasis-class ship during the keel-laying milestone of the third. This announcement is also a testament to the men and women of STX France who have worked so hard and so cooperatively on Oasis III.”[/quote_box_center]

The oasis class vessels are currently the largest passenger cruise ships in the world which already include Oasis of the Seas and Allure of the Seas. With another third and fourth on the way new boundaries will be made for sure.

The fourth oasis class ship will still need to be financed which is set to be well over $1.Billion and could possible add even more onboard features that the Oasis and Allure already have.

[quote_box_center]“We are very excited that Royal Caribbean has agreed to move forward with a fourth Oasis-class ship demonstrating their confidence in STX France to construct the most superior cruise ships in the world,” said Laurent Castaing, Chief Executive Officer, STX France. “We look forward to advancing the efficiencies of our ship building process to produce the most innovative ships that vacationers have come to expect from Royal Caribbean.”[/quote_box_center]

Before the fourth Oasis class there is still the third which has made a major milestone today with the ship’s keel laying. This starts the physical construction work for the future cruise ship as blocks will begin to come together.  During the ceremony, a 1,000-ton block measuring 32-ft by 154-ft (10 x 47 meters) was lifted by crane into the building dock. Newly minted coins were placed under the keel and will stay in place there until the end of the ship’s construction. Once the ship is near to completion, the coins are retrieved and presented to the ship’s Captain and crew to be placed onboard the ship. The third Oasis class ship will be delivered by STX France to Royal Caribbean by spring 2016.

The current Oasis ships are 225,282 tons and can carry 5,400 passengers, The third oasis class ship will be 227,700 making it the largest cruise ship in the world when construction is completed. 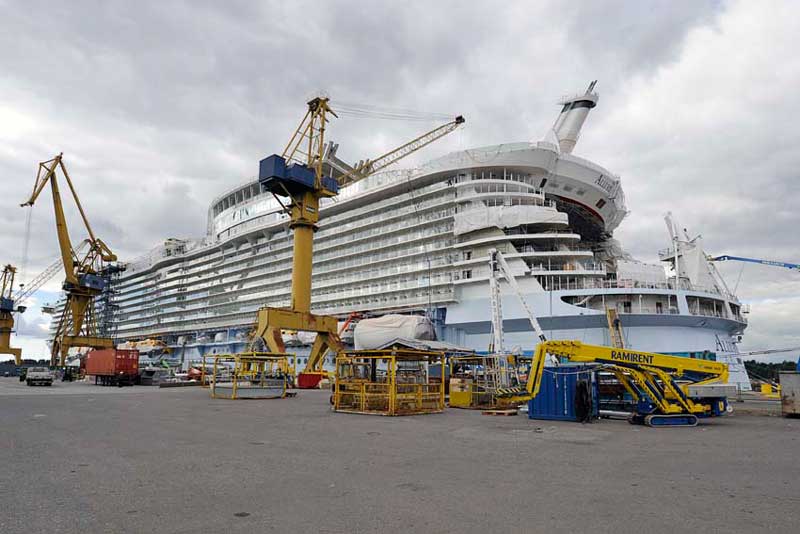