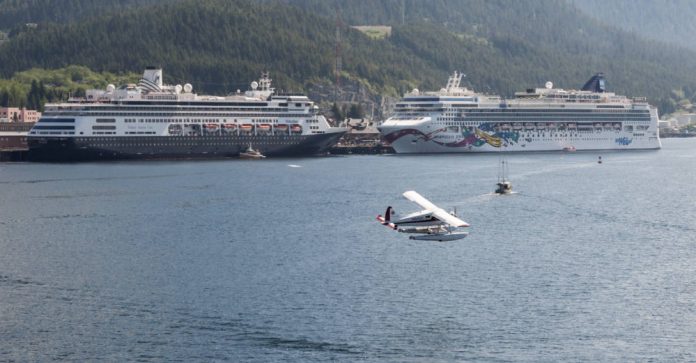 A floatplane has crashed in Ketchikan, Alaska after attempting to land between cruise ships.

Another Floatplane Crash in Alaska

On Thursday morning there was another floatplane accident in Alaska. While a small plane was attempting to land on the water between cruise ships it crashed and the local authorities have stated all four aboard were ok with only one needing further attention in Hospital.

The accident occurred just off Ketchikan which is a busy cruise ship port in Alaska. From our understanding, there were no cruise ship passengers on the plane at the time. However, this is extremely worrying with now the third floatplane accident in two months.

According to cruise passengers who told Alaska Public Media, the plane made a turn left too soon before slowing down then the wing clipped the water. The crash was seen from the decks of the Sebourn Sojourn, a luxury 250 passenger cruise ship.

The same site also mentioned that many smaller boats in the area came to the rescue and pulled everyone aboard safely out and back to the dock.

There were many cruise ships which called at Ketchikan on Thursday but many didn’t arrive until later in the afternoon. In the morning the ships Ruby Princess operated by Princess Cruises, ms Eurodam operated by Holland America Line and the already mentioned Sebourn Sojourn were the first ships docked there. Slightly later came Golden Princess, Nieuv Amsterdam and then Star Legend.

An investigation is expected to be launched. We would also advise any cruisers thinking about booking a floatplane shore excursion in the region to only book through the cruise line and do research first.

A tragic floatplane mid-air crash occurred in May where a total of six people died including cruise ship passengers. The crash was also in Ketchikan during an active shore excursion. There was also another floatplane accident when one flipped over and two people died.