Five of The Most Thrilling Activities At Sea

There are many people who book a cruise to relax and get some sun or to be pampered in the ships spa but there are also those people who book a cruise for a thrill! Cruise Hive looks at some of the most thrilling activities at sea, actually we should re name this article the most scariest, fast paced, heart pounding, nerve-racking activities at sea. Don’t worry they’re not that bad and in fact once you try them you’ll be getting in line again in no time.

We thought we would start off with one of the most innovative new activities at sea in 2014. The RipCord was first introduced to the cruise market when Quantum of the Seas was introduced to the world by Royal Caribbean. RipCord is where passengers can have a skydiving experience at sea and its very unique indeed. Its Located at the aft of the Quantum class vessel and looks like a large glass tank of air. Beginners and experienced people can try it out which is controlled by an onboard Skydive expert.

Yes, you thought right it is actually a real life plank that sticks out from the side of the ship. It was first introduced on Norwegian Breakaway which was a new class of ship for Norwegian Cruise Line. This might have first been used by the pirates but now cruise passengers can get a thrill too. The Plank is located at the ships three-story sports complex on the open deck and it sticks out over the ocean by eight feet. Are you scared yet? A photo is also taken of the person who dares to give it a go.

Vertigo is one of the most thrilling water slides in the cruise industry that begins all the way up on deck 18! The slide is on MSC Cruises Preziosa which entered service in March 2013. The cruise line has several new ships on order so we can expect even more thrilling innovations when they debut. Vertigo twists and turns all over parts of the open deck and even goes over the edge of the ship where brave cruisers can get a fast ocean view. The slide is 120 metres and once inside the tube there are strobe effects to make the experience even more of a thrill.

The Zip Line was first introduced on Oasis of the Seas which is operated by Royal Caribbean. The zip line is one long thrill, it’s located at the ships Sports Zone and is a non-stop 82 feet ride (25 metres). The Zip Line suspends nine decks above the Broadwalk so when in use thrill seekers can enjoy breathtaking views of the worlds largest class cruise ship.

Another Royal Caribbean feature, the FlowRider was first introduced at sea on Oasis of the Seas and the large cruise ship has two of then located at the aft. The FlowRider has become so popular that the cruise line is now rolling the activity to other ships in the fleet. passengers get the chance to try out their Surfing skills in a controlled environment along with a surf professional. The FlowRider will produce artificial waves that cruisers have to mange and surf on.

If your into thrilling adventures onboard then some of these we’ve mentioned might take your interest. There are several other great thrills at sea worth a mention including the North Star on Quantum of the Seas but from reading reviews online you could be waiting up to 2 hours in long lines which isn’t really thrilling. Also Bumper Cars at Quantum of the Seas SeaPlex might be worth a try where passengers can bump around with great tunes and lighting effects to go along. Let us know in the comments below of any other great thrills at sea that you’ve enjoyed. 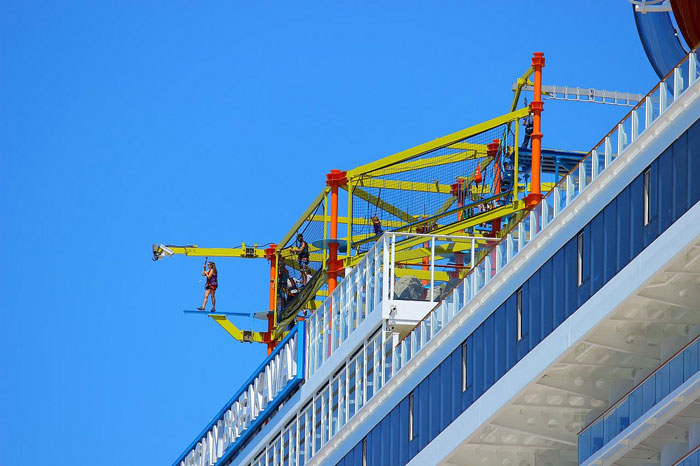