Five Major New Cruise Ships to Sail From Florida in 2018 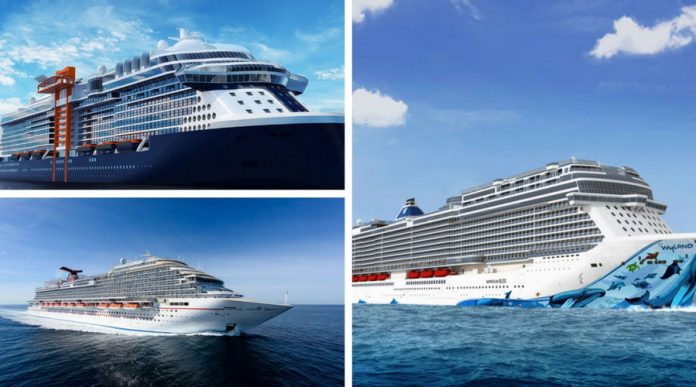 2018 will be another busy year of new cruise ships entering service. All the biggest cruise lines will have new ships, Carnival Horizon will arrive for Carnival Cruise Line, Symphony of the Seas will arrive for Royal Caribbean, Norwegian Bliss for NCL, Celebrity Edge for Celebrity Cruises and Nieuw Statendam for Holland America Line.

These are all the major cruise ships which will be based out of Florida at some point in 2018. The ships will also be spending some time sailing inaugural cruises in Europe and beyond. Let’s take a look at what’s to come:

One of the first major new cruise ships to arrive in 2018 will be Carnival Horizon, the second Vista-class ship for Carnival Cruise Line. The ship is currently under construction by Fincantieri in Italy and in the final fitting out phase with the final touches underway. The vessel has already completed Sea Trials and the next major milestone will be when Carnival Horizon debuts in April.

Carnival Horizon will depart on its maiden voyage on April 2, 2018. This special inaugural voyage will last for 13-days and sail the Mediterranean from Barcelona, Spain. The new Carnival cruise ship will sail a transatlantic 14-day voyage departing Barcelona on May 9 and arriving in New York, U.S. on May 23, 2018. The ship will spend the Summer sailing from the Big Apple offering Bermuda and Caribbean itineraries.

Carnival Horizon will finally settle down at its year-round homeport in Miami, Florida. The first regular voyage from Port Miami will begin on September 22 but before that a one time 2-day cruise to Nassau, Bahamas will take place from September 20-22. The new service from the Florida port will offer 6-day and 8-day cruises to the Caribbean.

The Carnival Horizon will showcase all its new onboard features including SkyRide and an IMAX Theater. the ship will introduce a new teppanyaki venus, Dr. Seuss WaterPark and a dedicated Guy Fieri Smokehouse venue.

Celebrity Edge is probably one of the most anticipated new class cruise ships coming. The new generation ship for Celebrity Cruises isn’t just innovative but also designed with new type staterooms and more.

Celebrity Edge is currently under construction at the STX shipyard in France and in June 2017 the first block was laid which was a major milestone. Now the vessel is well underway but still, some major milestones will need to be met including the float out onto the water for the very first time, sea trials and the start of the fitting out phase.

If you love cruise ships like us then no doubt you already know about the mind-blowing features we already know about onboard Celebrity Edge. The first which comes to mind is the innovation and industry first “Magic Carpet”. Magic Carpet is a platform that extends out on the side of the new ship and it features a unique bar that offers unbeatable ocean views. The Magic Carpet can also be used for tendering operations which is pretty impressive as it can be lowed from the upper deck all the way to the ocean below.

Celebrity Edge will begin its new service sailing Eastern and Western Caribbean cruises from Port Everglades in Fort Lauderdale, Florida starting in December 2018. In 2019 the Celebrity cruise ship will sail in Europe with 7-day to 11-day cruises out of Barcelona, Spain.

Celebrity Edge will be 117,000 gross tons and will carry 2,900 guests at double occupancy. We can expect further details about the ship to be released through 2018.

Symphony of the Seas – PortMiami, Florida

Symphony of the Seas is in the final stages of construction by STX France. thanks to the cruise line for constantly releasing teaser photos of the ship at least once a month since construction first started over a year ago. The vessel will be similar in design to its sister ships but with several improvements which we’ve already posted about here. In fact, construction has been going so well that Symphony of the Seas is set to debut three weeks earlier in Europe.

Symphony of the Seas will make its debut in March 2018 which is earlier than the original April 21 debut. The ship will sail from Barcelona for the Summer season and then she will begin a year-round service from PortMiami starting in November 2018. What’s even better is that Symphony of the Seas will be based out of the brand new modern shiny Royal Caribbean terminal and offer week-long Eastern and Western Caribbean itineraries.

Symphony of the Seas will be a large 230,000 gross tons and once in service will carry 5,500 passengers.

They just keep coming from the major cruise lines and NCL will welcome its third Breakaway plus class vessel named Norwegian Bliss. The large vessel will be similar to sister ships Norwegian Escape and Norwegian Joy which was purpose-built for the Chinese market. Norwegian Bliss will become the new flagship once it arrives in Spring 2018.

Norwegian Bliss will be such a good ship and offer something all types of cruisers. once of the most anticipated new features is the large race track which was first introduced on sister ship Norwegian Joy.

The new cruise ship is currently under construction at the Meyer Werft shipyard in Papenburg, Germany and just like other ships, it will arrive in the Spring of 2018. the ships maiden voyage will be from Southampton on April 21 and it will be a transatlantic voyage to New York in the United States. In May the ship will sail down to PortMiami and then from there to Los Angeles. Norwegian Bliss will finally reach its new homeport in Seattle, Washington and sail its first voyage from there on June 2, 2018. The NCL ship will be the first ever ship from Norwegian Cruise Line to debut in Alaska. The ship will be based there during the Summer.

Norwegian Bliss will then spend the Winter months out of PortMiami, Florida. Its new season will begin on November 17, 2018, offering 7-day Caribbean cruises departing the popular port every Saturday. Once complete the cruise ship will be 167,800 gross tons and be able to carry 4,000 guests.

And finally, the fifth new cruise ship to offer cruises from Florida is Holland America Lines second pinnacle class ship, Nieuw Statendam. The ship will be the sister to ms Koningsdam which joined the fleet in 2016.

The future Holland America vessel is currently under construction at the Fincantieri Marghera shipyard in Venice, Italy. Just recently the shipyard and cruise line celebrated its traditional coin ceremony which marks the start of the fitting out phase where all the interior space will start to take shape. Nieuw Statendam will arrive into service in December 2018 and when she does will become the new flagship of the fleet.

The ships maiden voyage will depart Civitavecchia (Rome) on December 5 and this will be the first chance Nieuw Statendam will showcase all her new features. The ship won’t stay in Europe for long as its maiden voyage will also be a transatlantic one lasting for 14-days and ending in Fort Lauderdale, Florida.

After some one-off cruises from its new year-round homeport in Florida, the new cruise ship will alternate between Eastern and Western Caribbean cruises for its regular service. We’ve got all the itinerary details here if Nieuw Statendam takes your interest.

Nieuw Statendam will be 99,500 gross tons which isn’t so large compared to the other ships mentioned in this post. The vessel will also be able to carry 2,666 passengers. 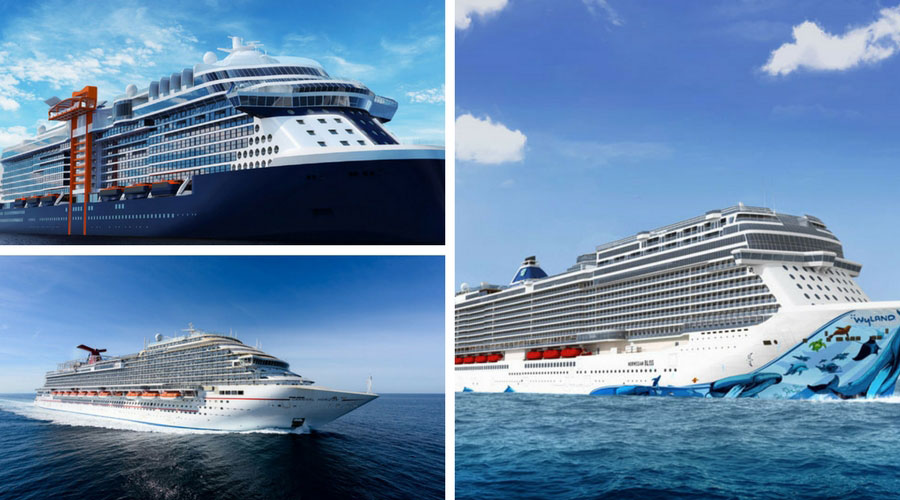