The first steel has been cut for the first new generation Meraviglia-Plus class ship. The name of the vessel has also been revealed.

Plenty of news coming from MSC Cruises as the first steel has been cut for the new generation Meraviglia-Plus class at the STX France shipyard. The cruise line also revealed the name of the future ship as MSC Grandiosa.

During an event at the shipyard in France, another future MSC cruise ship MSC Bellissima also hit a major construction milestone. In our other post, the MSC Bellissima celebrated its coin ceremony for the first construction block. The vessel will become the sister ship to MSC Meraviglia and the second in its class entering service in March 2019.

“Today we are celebrating a truly unique moment, as it is the first time that key shipbuilding milestones for two different ships are celebrated on the same day. This is a testimony of the strength and ambition of our investment plan.”

MSC Grandiosa has now officially started physical construction and moves out of the design and preparation phase at STX in France. The future cruise ship will still have some major milestone to hit including the keel laying, fitting out and sea trials. Once completed in November 2019 it will be the largest cruise ship in the fleet.

“Additionally, with MSC Grandiosa we also continue to innovate in product. Just as MSC Cruises “democratized” the luxury cruise experience when we were the first cruise brand to introduce a ship-in-ship luxury concept, the MSC Yacht Club, we are now doing the same for art and culture with the very first fine art museum at sea. Similarly. MSC Grandiosa will be the third of only four MSC Cruises ships to feature Cirque du Soleil at Sea, hosted in the uniquely complex, custom-built Carousel Lounge.”

“Of course, over and above everything else, these ships will be once again at the forefront of environmental technology at sea. In fact, amongst other innovations, they will feature the latest hybrid exhaust gas cleaning systems, SCR-Catalysts, state-of-the-art waste management and recycling capabilities, emission-reducing energy and heat recovery systems, and highly advanced wastewater treatment.”

MSC Grandiosa will be a massive 181,000 gross tons and will surpass the current biggest ship in the fleet MSC Meraviglia. The under-construction MSC ship will also have a length 1,086 feet and a maximum capacity of 6,334 guests. 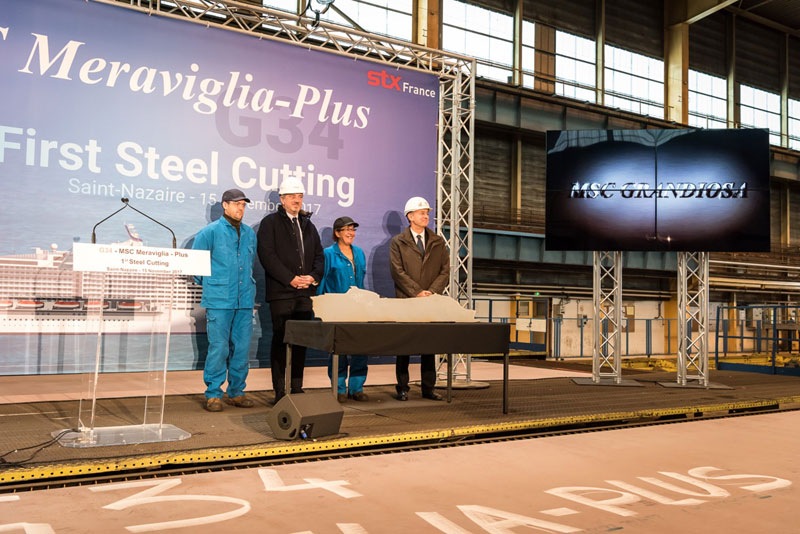