MSC Cruises has revealed a first look at the new cruise facility coming to PortMiami towards the end of 2022. It will feature two terminals!

PortMiami is changing and now MSC becomes the fourth cruise line to have a futuristic new cruise terminal or should we say terminals! The cruise line has released some shiny new renderings of the facility and details which we’ll go into further below.

“With another 13 cruise vessels due to join our fleet in the next eight years, our ambition is to have our most innovative ship classes represented at PortMiami, bringing a wealth of choice to our North American as well as international guests.”

“In particular, the new terminal – which will be one of the most innovative the industry has seen – will ensure that we can provide our guests an enhanced end-to-end high-quality experience while both embarking and disembarking, thus adding to their ability to fully enjoy every moment of their vacation.”

MSC Cruises will continue its North America expansion with an innovative new cruise terminal at the cruise capital of the world. The Miami-Dade Board of County Commissioners has officially approved the development but there’s something different about it!

The building will actually house two terminals along with two cruise ship berths. The facility will be able to cater to two huge MSC mega ships at the same time including the future 205,000-ton World class ships. MSC will be able to manage up to 28,000 passenger movements in one day!

Construction is scheduled to begin in early 2020 and it’s expected to be completed late 2022. All MSC vessels based out of Miami, Florida will use the new terminals.

Cruise Hive readers can also watch this rendering video from MSC Cruises showcasing the new facility at the port:

MSC Cruises currently operates four vessels out of PortMiami: MSC Seaside and MSC Armonia year-round; MSC Divina seasonally; and MSC Meraviglia, which will join the ships sailing from Miami this fall, seasonally.  With the new cruise facilities, MSC Cruises will bring a total of 1 million guests through PortMiami each year.

We recently posted some photos of the futuristic new Norwegian Cruise Line terminal which is currently under construction at PortMiami. Royal Caribbean also opened its new modern facility last year and Virgin Voyages even revealed plans for a shiny new terminal too. 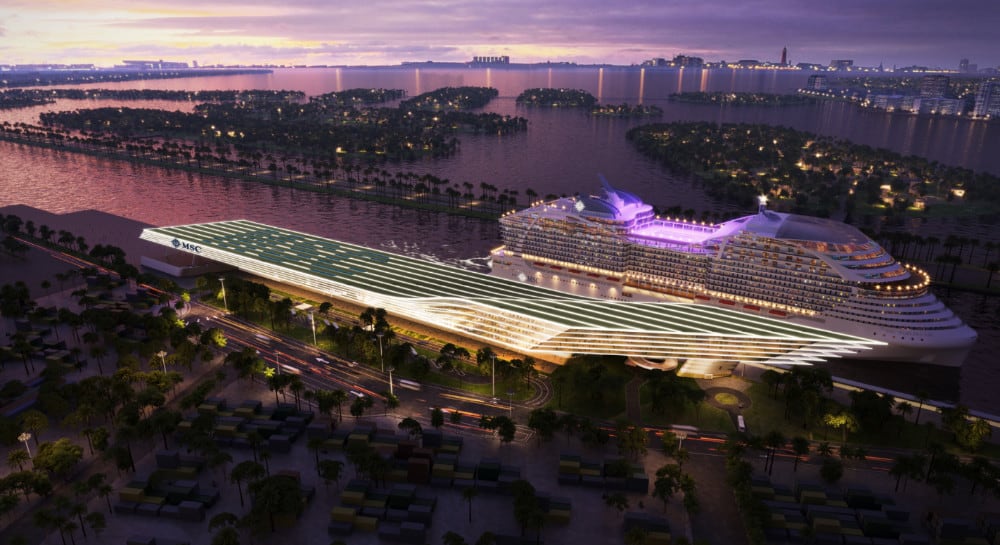