First Block Laid for Royal Caribbeans Spectrum of the Seas

A major milestone has been hit with the first block laid for Spectrum of the Seas, the first Quantum-Ultra class cruise ship for Royal Caribbean.

Royal Caribbean and the shipyard had a keel laying ceremony for Spectrum of the Seas which will become the first Quantum-Ultra class cruise ship for Royal Caribbean. The major construction milestone took place at the Neptune Werft shipyard in Rostock-Warnemünde, Germany.

The keel laying ceremony is when the major construction begins where many blocks will be built and put together. The first blocked which was lowered down weighs 938 tons and there are a total of 74 blocks for Spectrum of the Seas. A lucky cent was also placed before the block was lowered into position.

The steel for Spectrum of the Seas was already laser cut back in August 2017 and since then it has been a non-stop process where the block has come together. There still many major construction phases to come for the first ever Quantum Ultra class cruise ship for Royal Caribbean.

Once complete the Royal Caribbean cruise ship will be 168,800 gross tons and be able to carry 4,200 passengers. Spectrum of the Seas will be slightly larger than the original Quantum-class vessels but will be a similar design. The ship will enter service in 2019 with another Quantum Ultra-class arriving in 2020. 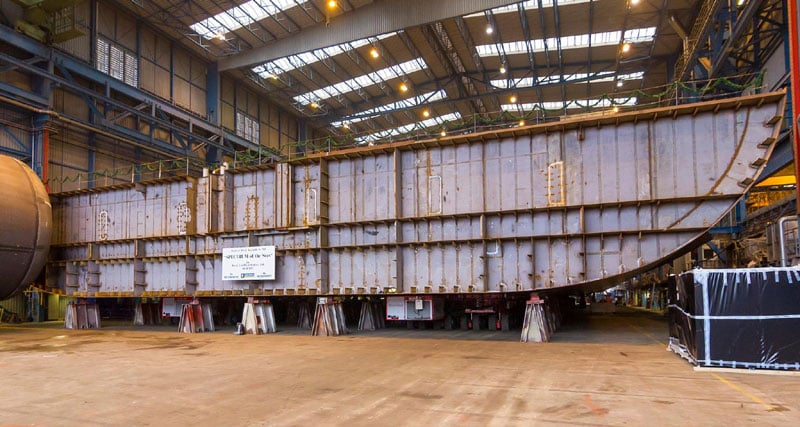