Fire Extinguished After Breaking Out Onboard Carnival’s Mardi Gras 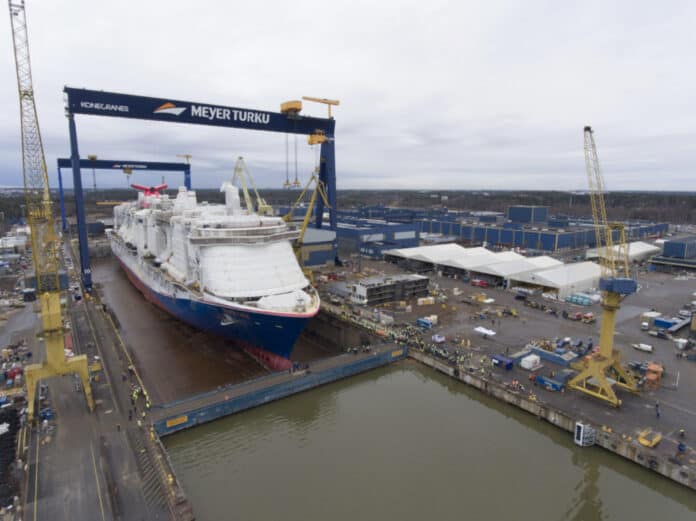 A fire broke out on Carnival’s new Mardi Gras cruise ship which is under construction at the Meyer Turku shipyard in Finland.

A fire broke out onboard the Mardi Gras on Tuesday morning. The new vessel is currently in the outfitting phase at the Meyer Turku shipyard in Turku, Finland.

According to a local report, the fire broke out in a cabin on the upper deck and it did not spread beyond that space. Eighteen fire brigade units were apparently sent to offer assistance but the shipyard managed to extinguish the fire with its own crews.

Shipyards will have their own trained fire teams due to the high possibility of fires breaking out during construction and all kinds of different materials on site.

Thankfully there were no injuries from the fire and all workers were safely evacuated. Once the fire was out the entire ship was checked over.

The vessel is currently being fitted out and the majority of work is taking place in the interior spaces. She is the largest vessel ever constructed for the cruise line and the first in the fleet to be powered by Liquified Natural Gas (LNG).

This is not the first time a fire has occurred at the Meyer Turku shipyard. During construction of Costa Smeralda, which is an almost identical class vessel, a fire broke out around a year ago and thankfully that was also extinguished with no injuries.

Mardi Gras was originally scheduled to enter service in August 2020 but due to the complexity of construction that debut is delayed until November. The 180,000 gross ton cruise ship will begin sailing the new Carnival Terminal 3 at Port Canaveral on November 14, 2020.