Final Breakaway Plus Class cruise ship to be named Norwegian Encore and first steel cut at the Meyer Werft shipyard in Papenburg, Germany.

Norwegian Cruise Line has announced the name for its future cruise ship as Norwegian Encore. This will be the final ordered Breakaway-Plus class ship. The cruise line revealed the name as the first steel was cut for the NCL cruise ship.

Norwegian Encore will be the sister ship to Norwegian Escape, Norwegian Joy and the yet to enter service Norwegian Bliss. The vessel will be the last in the class series as Norwegian Cruise Line moves into a new era of cruise ship design.

It’s a big day for Norwegian Encore as the first piece of steel was cut, marking a new phase from design into physical construction. A ceremony was held at the Meyer Werft shipyard in Papenburg, Germany. All the plates of steel will come together over the coming months to makes large blocks which will then come together to make the ship as one. It will all be completed by October 31, 2019, which is when Norwegian Encore will be delivered from Meyer Werft to Norwegian Cruise Line.

“Norwegian Encore will be the ultimate Breakaway Plus Class vessel and we are thrilled to celebrate the start of construction for this incredible new ship.”

“Over 50 years ago the Norwegian brand began creating unforgettable vacation moments with the first inter-island cruise in the Caribbean from Miami. We continue building on our legacy of innovation with this brand-new state-of-the-art vessel perfect for exploring the natural beauty of some of the most remarkable islands in the world.”

As usual, when it comes to these steel cutting events executives from the shipyard and cruise line attended. This is a major milestone

and there are still much more to come including the first large block being laid, the ships float out onto the water for the first time, sea trials and the fitting out phase.

More to Come on Norwegian Encore

We expect the Norwegian cruise ship to have race track which was first introduced on Norwegian Joy in 2017. The ship will also no doubt feature laser-tag, a large AquaPark, and specialty dining venues but the big question is will NCL introduce anything new? We’ll know this year.

Norwegian Encore will be based out of PortMiami, Florida and offer week-long Caribbean cruises departing every Sunday. It will be around 169,700 gross tons and have a passenger capacity of 4,000. The cruise line will be revealing more about the ship soon including onboard features, further itinerary details, and the hull artwork. Reservations for Norwegian Joy will open in March 2018. 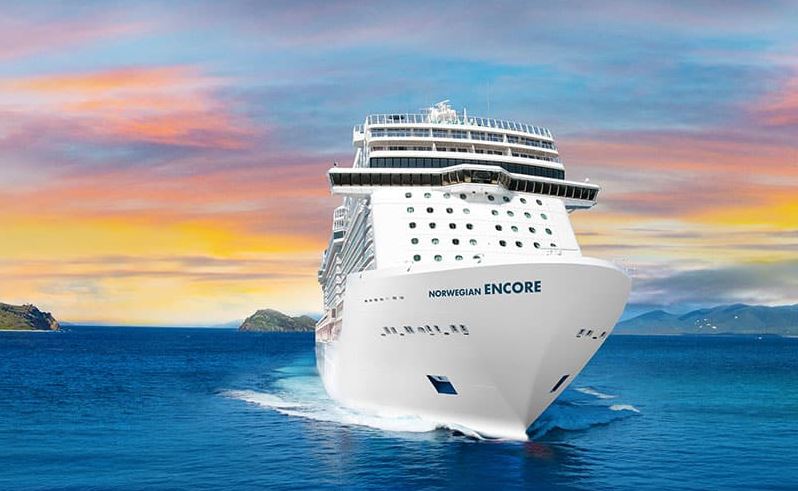