Ferry blast in the popular cruise passenger destination of Playa del Carmen injures 25 people. Just across from the cruise port of Cozumel, Mexico where many cruisers were coming from. 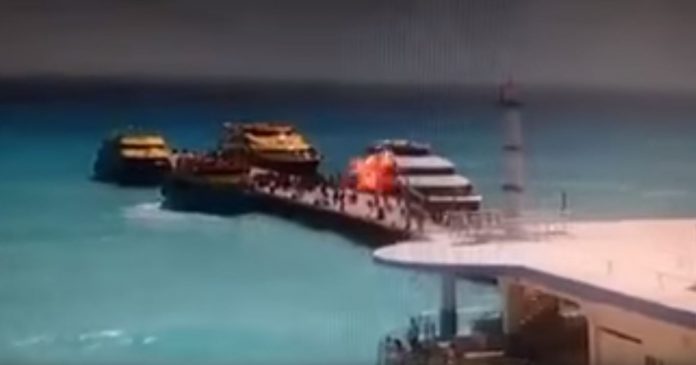 If you’ve been to Cozumel on a cruise ship then it’s likely you’ll know Play Del Carmen, a popular destination on the mainland which many cruise ship passengers travel to via local ferry for shore excursions. This week an explosion was caught on video on one of those very ferries which transport tourists to and from Playa Del Carmen.

According to ABC News, 25 people were injured including 2 from the United States after an explosion occurred from onboard a ferry docked at Play Del Carmen on Wednesday. As seen in the footage further down below the blast ripped through the ferry and impacted those nearby on the pier. The good news is that none of the injuries were life-threatening and service between Cozumel and play Del Carmen continued.

Playa Del Carmen is located on the coast of Mexico’s Yucatán Peninsula. The destination is popular with cruise ship passengers from the island of Cozumel which is just across the way. On a clear day, you can actually see Cozumel in the distance. As seen in the video Wednesday was a busy day with many ferries bringing cruise passengers to the mainland for shore excursions including local Mayan Ruins and to experience the stunning Play Del Carmen beach.

Wednesday was an extremely busy day in Cozumel which a total of six cruise ships including Carnival Victory, Carnival Valor, Crown Princess, Vision of the Seas, Rhapsody of the Seas and Mein Schiff 6. Those ships add up to at least 15,000 cruisers so the blast could have been devastating if the circumstances were different.

Authorities do not yet know the cause of the blast which started from onboard the local ferry.