Fred Olsen Cruise Lines has released more details about how the Fire onboard the Boudicca will affect it’s current cruise. The cruise line has confirmed that it is cutting short it’s 18-night Cape Verde & the Canaries cruise while calling at  Tenerife. After engineers inspected the damage the cruise line has stated that the ship will have to stay in the port longer so repairs can be made.

All the passengers sailing on the 18-night cruise are being flown back to Southampton today (Jan 29th) at Fred Olsens expense but the cruise line does expect the next scheduled cruise from Southampton on 7th February to go ahead. passengers have received a full 100 percent refund of the entire cruise and a 50 percent discount on any new booking for a future cruise within Fred. Olsen’s current 2015/16 programme.

It’s being reported that Fred Olsen cruise ship, Boudicca has had an engine room fire that has also caused the British based cruise ship to list heavily on one side and a brief power outage.

Sunday Jan 25th at around 4am UK time the 21,900 gross ton vessel was sailing near the coast of Casablanca, Morocco when the fire broke out. The good news is that the crew have extinguished the fire and no injuries or fatalities have been reported.

Fred Olsen Cruise lines has posted an announcement on its site that states the following:

Fred. Olsen Cruise Lines can confirm that there was a fire on board its cruise ship, Boudicca, at around 4am on Sunday 25th January 2015, when she was sailing off the coast of Casablanca, Morocco.

The fire was in the Engine Room, but has now been extinguished, and no guests or crew have been injured. Guests’ services have now been restored, and guests have been kept informed of the situation at all times. Boudicca is carrying 784 guests and 356 crew members. The ship is currently under way, and is now sailing towards Arrecife, Lanzarote at 8 Knots.

We are in the process of reviewing the onward itinerary. Following the loss of the propulsion system, Boudicca listed for a short period, but is now fully stable, and there is no danger to guests or crew. The safety of all guests and crew on board Boudicca is Fred. Olsen Cruise Line’s utmost priority, and the ship will liaise with the relevant maritime authorities, should any need emerge. Boudicca is currently on an 18-night ‘Cape Verde & the Canaries’ cruise, which departed from Southampton on 20th January 2015. The ship sailed from Cadiz, Spain on Saturday 24th January 2015, and is scheduled to arrive in Arrecife, Lanzarote tomorrow, Monday 26th January 2015.

Dave Tonkin who was a passenger onboard the cruise ship was posting on twitter during the incident. He posted that the ship was in “Pitch black” and “listing heavily”.

@SkyNews fred olsen boudicca listing hard and engineless off of n/west coast of Africa after engine fire. I’ve got family on board!!

The Boudicca’s power has been restored and crew are trying to fix the propulsion issues. Fred Olsen Cruise Line is looking into a revised scheduled for the current cruise and is sailing towards Arrecife, Lanzarote. Due to the engine fire the ship is sailing at only 8 Knots.

The ship is currently on 18-night cruise which departed from Southampton, UK on Jan 20th. There are 784 guests and 356 crew members onboard at the moment and Its scheduled to arrive back in Southampton on February 7th. Cruise hive will keep readers informed of this developing news. 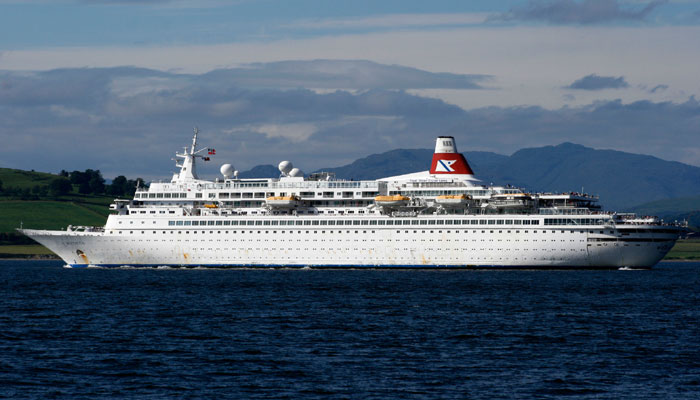