Electric-Powered Cruise Ship is First to be Named in Antarctica

The world’s first hybrid electric-powered cruise ship named MS Roald Amundsen is first ever to be named in Antarctica.

MS Roald Amundsen which is operated by Hurtigruten has celebrated her naming ceremony and is the first cruise ship ever to do so in Antarctica. The event took place at Chiriguano Bay on Brabant Island and also attending was godmother Karin Strand.

Instead of the traditional champagne bottle hitting the ship’s hull the cruise line used a block of ice to smash against the new cruise ship. She is named after the legendary polar hero Roald Amundsen.

“We could not think of a better location than Antarctica to name MS Roald Amundsen.”

Hurtigruten, the world’s largest and leading expedition cruise line, specially designed MS Roald Amundsen for exploring some of the most spectacular waters in the world. The ship has a passenger capacity of over 530 and has nine decks. Equipped with groundbreaking green technology, MS Roald Amundsen uses large battery packs to support her low-emission engines, reducing CO2 emissions by more than 20 percent.

MS Roald Amundsen made history this summer as the first cruise ship to sail on battery power, and became the first hybrid electric-powered ship to traverse the legendary Northwest Passage.

After completing the 2019-20 Antarctica season, she will spend the 2020 summer season in Alaska. A second hybrid electric-powered expedition ship, MS Fridtjof Nansen, will join the fleet in 2020. 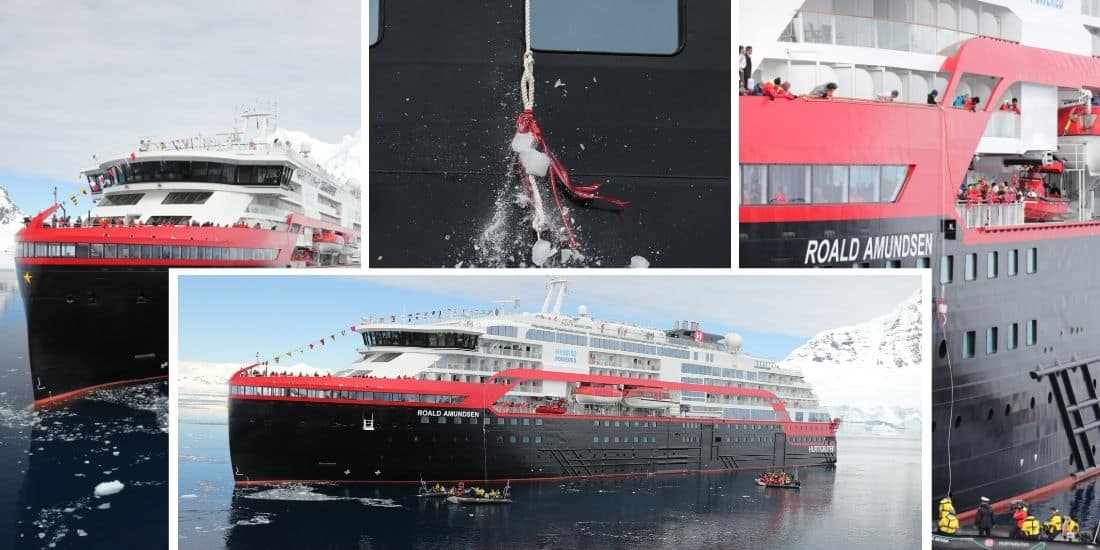