Dream Cruises is really hyping up its first ever cruise ship the Genting Dream. The 150,000 gross ton vessel is making its debut this November and the newly formed cruise line just finished a road show in the Chinese city of Chengdu.

A road show was held at Chengdu’s trendy new shopping location at Taikoo Li. If you didn’t know, Chengdu is located in Sichuan province in Eastern China, with a population of around 10 million it was the perfect choice to showcase the upcoming ship. The Roadshow which took place on Tuesday afternoon showcased all the luxury features and a talent show.

”The Western China high-end travel market, especially Chengdu, has become one of the target markets for cruise travel, and it is my pleasure to introduce Dream Cruises and its inaugural ship Genting Dream to the market through our roadshow in Chengdu. Dream Cruises aims to redefine vacation travel with a transformational journey at sea, by offering guests the finest Asian and international dining, exceptional service, enthralling entertainment and inspirational experiences.”

The new ship will be featuring ‘China’s Got Talent’, the first ever at sea. It will be a 45 minute theatrical representation of the worldwide hit TV series held in the Zodiac Theatre, the cruise ship’s 999 seat state-of-the-art venue. An energetic, booming opening montage, complete with the same lighting, set design and theme music as the main China’s Got Talent show will set the scene. The show is just one of many entertainment offerings for the luxury Asian based cruise line.

At the moment Genting Dream is under construction at the Meyer Werft shipyard in Papenburg, Germany. Once completed in November 2016 the ship will sail towards its new homeport of Guangzhou, China. Genting Dream will carry 3,400 guests and as it’s the region’s first ever luxury cruise line. 2,000 crew members will be servicing all those guests, that’s a leading crew to guests ratio in Asia. 70 percent of the ship’s staterooms will feature a balcony and 100 rooms will be connecting for families.

Genting Dream is taking luxury in the region to new heights with Dream Mansions. These are villas at sea with personalised butler service and a private experience in any of the ships 142 private areas. The ship is being purpose-built for the Asian cruise market so there will be a range of asian dining options and international restaurants. The ship will have one of the world’s largest Asian reflexology spas at sea, over 1,100 sq.m of retail space for duty free shopping, mahjong room, as well as a plethora of activities for family fun such as pools, water slides, video game centre, 3D cinema, mini-golf, ropes course and rock climbing wall.

Cruise Hive will keep readers informed on this exciting new ship, the first of two ships being built for Dream Cruises. The second ship named World Dream will be identical and making its debut a year later. 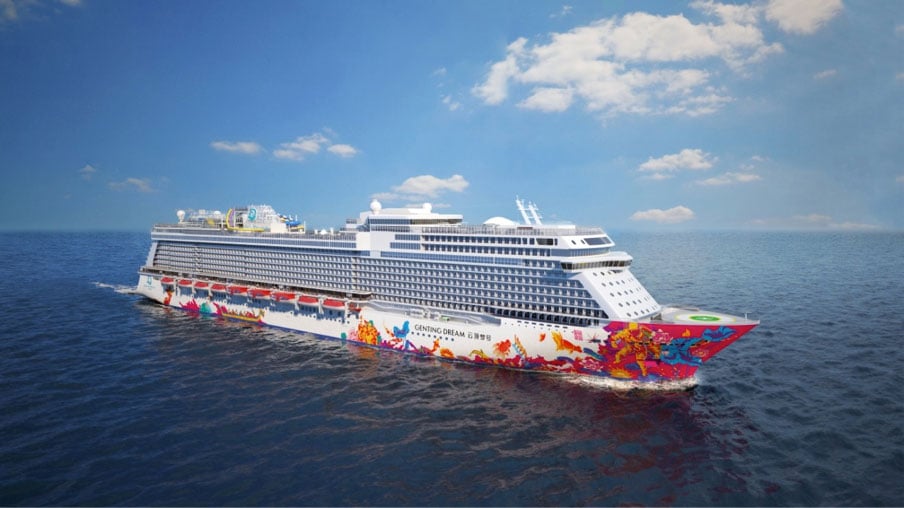