More details have been announced about the new entertainment and family experiences aboard Disney Wish, including shows and themed venues. 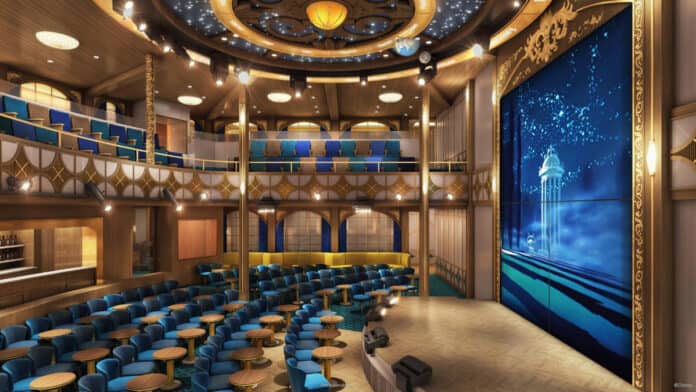 In a new press release, Disney Cruise Line has revealed phenomenal details about its newest ship, Disney Wish, scheduled to welcome guests in July. The ship will feature a wide range of new enchanting experiences for families to share together, including immersive shows, themed dining opportunities, and imaginative storytelling.

As the first new ship to join the Disney fleet since Disney Magic debuted in 2012, Disney Wish will be the first of the cruise line’s highly anticipated Triton-class of vessels. As a newer and larger vessels than the older ships in the fleet, Disney Wish will also introduce many exciting activities and adventures for passengers of all ages.

“Family is at the heart of everything we do,” said Laura Cabo, portfolio creative executive, Walt Disney Imagineering. “When we set out to design the next generation of Disney cruise ships, we wanted to provide families with more opportunities than ever to make lasting memories together and to experience Disney storytelling in completely new ways.”

As previously announced, Disney Cruise Line is combining innovative design and technology to create the next generation of family entertainment venues aboard Disney Wish. These imaginative environments will come to life with immersive storytelling and interactive shows that put families front and center to play a part in the magic.

For example, the fairytale castle-inspired Grand Hall, spanning decks 3, 4, and 5, will evolve from a gathering space into an enchanting theater through built-in special effects and the first-ever atrium stage on a Disney ship.

Guests will receive a royal greeting as they enter the glittering hall, and the venue will host Disney Princess greetings, the playful “Who’s Behind the Curtain?” game show, a spectacular farewell show on every voyage, and much more.

Luna, on deck 4 with an overlooking balcony on deck 5, is the ship’s brand-new entertainment hub, outfitted with a two-story LED screen wall, stage, and bar. Game shows, trivia, “Disney Songbook” karaoke and talent performances, and other fun events will be held on Luna’s stage.

“There will be no shortage of family fun aboard the Disney Wish,” Cabo said.

Shows aren’t the only new experiences guests will find aboard Disney Wish. While regular Disney cruisers are familiar with the line’s amazing dining options, including PALO Steakhouse, Animator’s Palate, Pinocchio’s Pizzeria and more, there will be even more outstanding options aboard Disney Wish.

In the dazzling dessert shop inspired by the Pixar film, Inside Out: Joyful Sweets is a colorful wonderland, designed to resemble the control center inside 11-year-old Riley’s mind. There guests will find an abundance of candy and novelty treats for purchase, including nearly 40 flavors of gelato and ice cream as well as cupcakes, macarons, cake pops, truffles, cookies, and brownies.

In another exclusive experience, guests can join their favorite “Frozen” friends for a summertime picnic in Arendelle specially designed for families with children ages 3-12. At Olaf’s Royal Picnic, guests will interact with Olaf, Anna, Elsa, and Kristoff like never before and delight in live musical performances of beloved songs like “Let It Go,” “Fixer Upper” and “In Summer.”

Under the expert direction of Baroness Dagmar Birgir — a lively lady-in-waiting to Queen Anna — castle staff will serve up delicious summer treats for the whole family. Children will receive an assortment of gifts and keepsakes for the occasion, including a reversible troll plush.

Disney Wish to Debut in July

With so much to look forward to, guests are eager for the ship’s arrival at its homeport, Port Canaveral in Florida. Though the ship’s introduction to the fleet has been slightly delayed, the maiden voyage is scheduled to sail July 14, before Disney Wish begins her premier season of 3- and 4-night itineraries to The Bahamas, calling on Nassau and Castaway Cay, Disney’s private island destination.

Disney Wish is the first of the Triton-class vessels and at 144,000 gross tons, is significantly larger than other ships in the Disney fleet. She will feature 1,250 staterooms to bring as many as 4,000 passengers to the magic.

The ship is currently under construction at the Meyer Werft shipyard in Germany, and her hull just touched water for the first time on February 11 – another milestone that is sure to the first of many magical moments for the vessel.