Cunard Line which is one of the worlds most historic cruise lines from the UK is celebrating its 175th anniversary and the cruise line has just released a new animated timeline video showcasing this.

The new video showcases Cunard’s 175 years of service and it highlights some of the most memorable moments in its history. The video is all animated and flows from one moment to the next including the lines most iconic vessels.

The video timeline begins with Sir Samuel Cunard in 1840 as the Britannia makes its maiden transatlantic voyage to Halifax, Nova Scotia. Also included is Cunard’s participation in WWI, the very first World Voyage in 1922 on Laconia, and the glamour and glitz of the 1950s. the animation continues all the way up to the present year which will be a year of anniversary celebrations.

“As a history geek, the chance to look back at Cunard’s illustrious 175 year history was a dream of a brief. Rifling through the annals was a delight and turned up wonderfully individual and quirky facts. We’ve woven them into a two and a half-minute story that celebrates what it is that makes Cunard unique. Most brands don’t have the luxury of an illustrious story that has literally changed history. Consequently many attempt to make one up. However, Cunard is different. After spending considerable time with the Cunard historian, Michael Gallagher we were blown away by the rich heritage of the company.”

It was a challenge to get all the animations into a two and half-minute story timeline and showcasing all the important moments of Cunards history. Attwater continues to say the following:

“Our biggest challenge was realising our ambitious ideas, trying to animate 175 years proved tough as each decade looked so different. I think we’re most proud of the complex New York scene because it says so much about Cunard as a brand. Also the WWI scene which, as viewers will see, communicates an important historical moment in a very respectful manner.”

2015 is going to be a huge year for the British based cruise line and this is just one video of several that have already been released. Also just days ago on January 10th the cruise lines flagship Queen Mary 2 was given a great send off with a fireworks display. The cruise ship was departing on its world cruise from Southampton, UK. 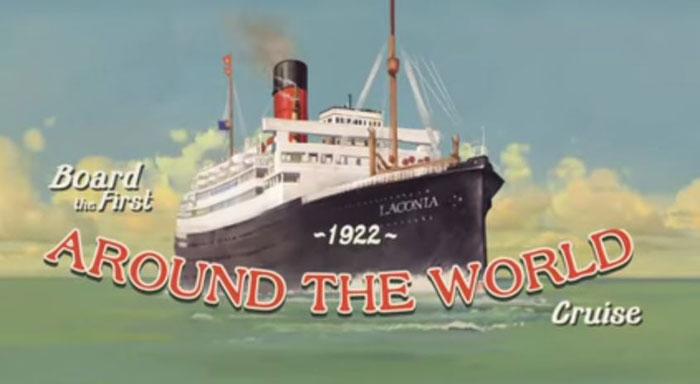