Cruises From Vancouver: The Pros and Cons

Find out about cruises from Vancouver, British Columbia and the pros and cons you should know before you book that cruise vacation.

Vancouver is a stunning waterfront city with an enviable quality of living in beautiful surroundings. Cruises from Vancouver depart to several thrilling destinations including Alaska, Hawaii and West Coast USA.

Vancouver is the largest port in Canada and the 4th largest cargo port in North America. Booking a cruise from Vancouver could be just the excuse you need to spend a few days exploring this world-class Canadian city in British Columbia (BC) before or after your trip.

Before you decide, check our these pros and cons of cruises from Vancouver which will help you make an informed decision on what’s right for you personally.

Pros for Cruises From Vancouver

Although most cruises from Vancouver are heading to Alaska, the port does act as a hub for cruises to other destinations. It’s important to find the itinerary that includes the ports of call and experiences that you most want to include. Not all Alaska cruises have the same itineraries.

One-way cruises to Alaska generally last from 5 to 7 nights with ports of call including Ketchikan, Juneau, Skagway, Glacier Bay, the Hubbard Glacier, Tracy Arm, Seward, College Fjord, Whittier. Longer cruises, up to 14 nights, go even further to Valdez, Homer and Anchorage before sailing back to Vancouver.

There are a few cruises from Vancouver lasting 35 night or longer, taking in the sights of Alaska before crossing the Pacific to Japan, Hong Kong, Vietnam and Singapore.

Some repositioning cruises offer a one-time chance to cruise south down the US Pacific Coast from Vancouver, stopping at San Francisco and Los Angeles. You will also find one-time cruises from Vancouver heading to Asia, South America, Mexico and traversing the Panama Canal.

Due to its favorable location close to Alaska, Vancouver is the only cruise port operating as a hub for one-way Alaska cruises as well as round-trip cruises. Those who want to enjoy a shorter Alaska cruise can book cruises from Vancouver and then fly home from Seward or Whittier (or join the cruise there and sail back to Vancouver).

The advantage of a one-way Alaska cruise from Vancouver is that the itinerary typically avoids ports of call in Canada and spends more time in Alaskan ports.

Visit Victoria as a Port of Call

Many cruises from Vancouver include a full day in Victoria on Vancouver Island as a port of call. The beautiful architecture on the waterfront, the unique island attractions and the world-famous Butchart Gardens are a must-see! Other cruises only stop at Vancouver Island for a morning (or even overnight!).

Another advantage of taking Alaska cruises from Vancouver is that most itineraries sail through the scenic Inside Passage from Puget Sound to the Gulf of Alaska. This route has sheltered waters and provides fantastic wildlife sightings as well as being closer to the dramatic coastal scenery.

In contrast, cruises from Seattle tend to opt for the Outside Passage which may have rougher seas and less viewing opportunities for spotting orcas and whales. The open sea can also cause seasickness when the weather is bad.

Canada Place was built in 1986 and expanded in 2001. Beneath the sail-like roof it includes the Vancouver Cruise Terminal, Convention Center, World Trade Center, the Pan Pacific Hotel and the FlyOver attraction.

Vancouver cruise terminal is easy to reach by road and has excellent on-site cruise parking for 750 cars. Pre-booking is recommended. You’ll find plenty more informative tips in this article on Must-Know Things About Vancouver Cruise Terminal.

Easy Transfers to and From Vancouver Airport

Most people taking cruises from Vancouver will arrive by air into Vancouver Airport (YVR). There are several ways to get from the airport to the cruise port which is just 8 miles away.

Taxis operate on a fixed price by zone and the trip currently costs CAN$35. The journey takes about 30 minutes. Other options include shuttle transport with WestCoast Sightseeing or take the Canada Line Rapid Transit Sky Train that connects the airport with downtown Vancouver.

The waterfront city of Vancouver has plenty of unique attractions that visitors can enjoy pre- and post-cruise. It hosts many festivals and sports events in all seasons including the Winter Olympics and Paralympics (2010), the Women’s World Cup (2014) and the Canadian Open Golf Tournament.

Take a boat ride and enjoy the scenery coastline or go whalewatching – a great way to start your cruise to Alaska. If you have time, hop across to Vancouver Island and spend the day in the outstanding Butchart Gardens.

Vancouver is famous for its cuisine, especially fresh seafood. Pacific Northwest salmon is particularly flavorsome when eaten fresh off the boat. Halibut, Canadian sable fish, BC Spot Prawns and sushi are the highlights of gourmet restaurants in Vancouver.

You can also visit the Capilano Salmon Hatchery or celebrate the Salmon Festival on July 1 (Canada Day) in nearby Stevenston, “Salmon Capital of the World”.

The pristine waters around Vancouver are home to some of the world’s largest and most impressive marine species such as killer whales (orcas), porpoises, dolphins, humpback and other whales, Six Gill Sharks, giant octopus, sea lions and harbor seals. To reduce pollution, Vancouver cruise port operates an EcoAction Program which includes Shore Power. This allows cruise ships to shut down their engines while in port and reduce underwater noise, greenhouse gas emissions and other pollution.

The port also offers discounted harbor dues (up to 47%) to cruise ships that operate using eco-friendly technology and use cleaner fuels.

Cons Against Cruises From Vancouver

So what are the disadvantages of cruises from Vancouver? Here are a few things you need to know that may affect your decision about booking a cruise from Vancouver, BC.

International flights to Canada are generally more expensive than domestic flights to Seattle or other US cruise ports.

One way to avoid the steep airfare to Vancouver is to depart from a US airport and fly to Seattle with a low-cost carrier. Seattle is only 156 miles (315 km) south of Vancouver cruise port.

The journey by road takes about 3 hours and can be done by car rental, shuttle or by Bolt (Vancouver express bus service) and Link Light Rail (Seattle downtown to airport).

Cruisers who are not citizens of the US or Canada will need to be pre-screened and obtain an online travel permit if they are flying into Canada or the USA (Seattle).

If you are a US citizen, or are crossing the border into Canada by road or sea (by train, ferry, bus or car, for example), you will only need to have a passport or acceptable photo ID for participating in cruises from Vancouver to Alaska.

Non-US citizens from eligible countries will need to apply for an ESTA in order to be allowed to disembark and enjoy shore excursions in Alaska, which is of course US territory. You can apply online for an ESTA. It costs US$14 and lasts for two years.

In addition, non-US/Canadian citizens will need an eTA (electronic Travel Authorization) if you are flying into Canada for your cruise.

You can apply online if you are a resident of an eTA eligible country. A Canadian eTA costs CAN$7 and lasts for 5 years or until your passport expires, whichever happens first. You do not need an eTA if you are a US citizen or are arriving by road or sea.

The port of Vancouver mostly handles cargo and has just one dedicated cruise terminal. However, it has three berths and can handle up to 4 cruise ships at any one time.

Vancouver is a deep-water port but it is limited in the size of cruise ships it can handle due to the low clearance of the Lions Gate Bridge. This landmark suspension bridge is a designated National Historic Site of Canada. It spans The Narrows of the Burrard Inlet and stands 364 feet (111m) in height.

Larger cruise ships can only sail beneath the bridge at low tide which can be a problem for this busy port. A strict “First Narrows Traffic Control Zone” governs boat traffic and does not allow any other ship to be in The Narrows when a large cruise ship is entering or leaving. Incidentally, the largest cruise ship ever to dock in Vancouver Port was the Norwegian Bliss in September 2018.

Cruises from Vancouver only operate from April to late September. If you are looking for a winter cruise, you need to use a different port of departure.

FAQ on Cruises From Vancouver

What cruise lines depart from Vancouver?

There are currently 28 cruises lines sailing out of the Vancouver cruise terminal. Some are small expedition ships and others may only call in occasionally as part of their worldwide itinerary.

How much is an Alaska cruise from Vancouver?

The cost of cruises from Vancouver depends on many factors such as the length of the cruise, type of stateroom, the size and standard of the cruise ship, the popularity of your chosen dates and the itinerary.

In general, Alaska cruises from Vancouver aboard a large cruise ship cost between $100 and $450 per day. You will also need to add the cost of flights, drinks on-board, daily gratuities to cruise staff, excursions and optional activities at each port of call.

Where should I stay in Vancouver before a cruise?

The Fairmont Waterfront Vancouver is one of the closest (0.1 miles) and offers a shuttle service to the port. Check out more options on this comprehensive list of hotels near Vancouver cruise port. 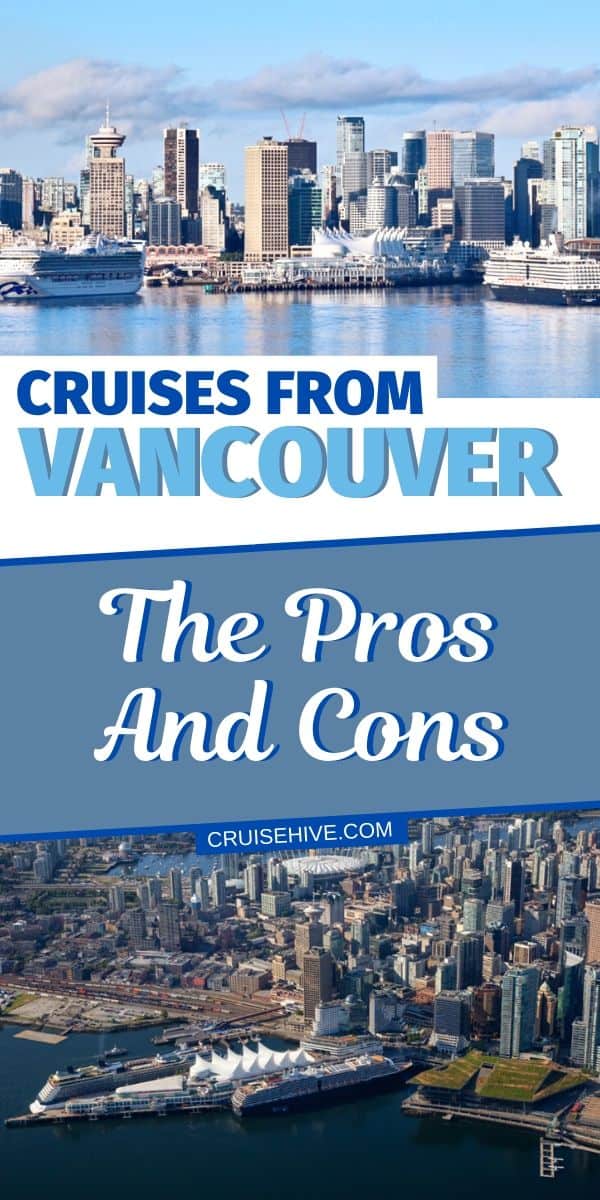