Why Haven’t We Had Any Test Cruises Yet?

The 122 people onboard the cruise ships own tender boat must have been extremely worried. The boat is seen in the video departing the port in Torquay, Devon, UK and taking many cruise passengers back to the ship. As the boat sails into the open ocean the waves get stronger and really begin to force the boat to rock like crazy. We can’t imagine how the passengers inside felt.

According to the Daily Mirror the tender boat is from the German ship MV Amadea and because of the bad weather the vessel was originally scheduled to call at Dartmouth. Locals in the area were surprised that the ship was taking its guests ashore especially after other boats in the region had stopped operations.

It seems from the video there were extreme weather conditions with high winds. The high winds are forcing large strong waves. Robin Boothroyd, 42, of Paignton, who filmed the battered boat, told the Mirror: “I have never really fancied a cruise and this was why.” Chamber of Trade president Marshall Ritchie, who met them at the harbour, said to the site: “Some of the passengers looked quite pleased to be on dry land, but they all had smiles on their faces.”

We’re glad all the passengers were ok and continued their tour around the local area. 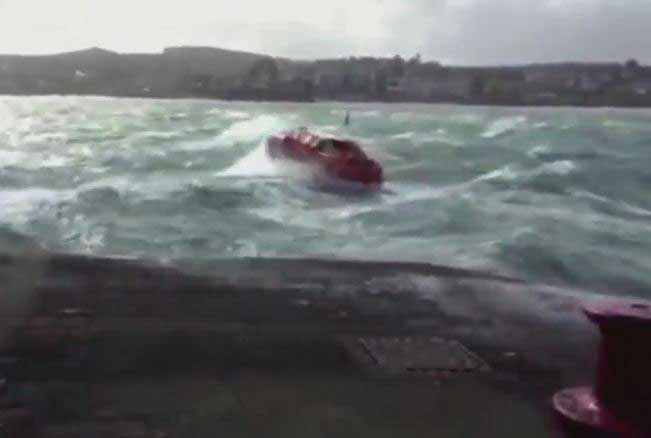