Carnival Dream will now sail a cruise to nowhere departing the Port of Galveston tomorrow, here are the details. Enchantment of the Seas has also departed Galveston on her altered itinerary.

Carnival Cruise Line has now released an update that the Port of Galveston remains closed due to fog and the Carnival Dream remains anchored off the coast. Those guests booked on the next cruise scheduled to depart today are being told to not arrive at the terminal and wait for the next update at 5:00 PM local time.

Good news for the Port of Mobile as the Carnival Fantasy will arrive but much later. The ship will dock later on in the afternoon and guests booked on the next sailing should start arriving at the terminal from 8:00 PM. All guests must be onboard by 10:30 PM.

For Enchantment of the Seas, the ship is waiting for a slot to depart Galveston when allowed to do so by the authorities. Do keep checking for official updates from the cruise line if you are booked on any of the cruises.

Cruise ships are being impacted by heavy fog which has forced two homeports on the U.S. Gulf Coast to close.

The Port of Galveston and the Port of Mobile are both currently closed to all marine traffic due to heavy fog in the area. With both ports closed, it has resulted in the delay of two cruise ships operated by Carnival Cruise Line and one operated by Royal Caribbean.

The Carnival Dream was expected to be docked in Galveston already to end its 5-day Western Caribbean cruise which departed the port on January 11. The vessel is now anchored off the coast until the fog clears up. Enchantment of the Seas has remained in the Port of Galveston and was originally scheduled to depart yesterday, January 15. The Carnival Fantasy also remains just off the coast due to fog in Mobile, Alabama and will remain there until the port reopens.

Here is the latest weather update from Carnival Cruise Line:

Dense fog persists and the port remains closed to all marine traffic. We will continue to monitor the weather conditions and provide you with another update no later than 1:00 PM (CST). Please do not proceed to the cruise terminal until you receive our final update.

To receive updates, if you haven’t already done so, please sign up for text alerts by texting CCL1 to 278473 (CRUISE).

The port remains closed to all marine traffic due to fog. We will continue to monitor the weather conditions and provide you with another update by 1:00 PM (CST). Please do not proceed to the cruise terminal until you receive our final update.

To receive updates, if you haven’t already done so, please sign up for text alerts by texting CCL2 to 278473 (CRUISE).

Here are some exclusive photos just for Cruise Hive of how the fog is from onboard the Carnival Dream cruise ship which is currently anchored. It is nice to see guests can still enjoy a round of mini-golf too!

Carnival Dream in Heavy Fog
1 of 9

Royal Caribbean Chief Meteorologist James Van Fleet has been keeping track of the weather developments including the fog in Galveston. Enchantment of the Seas remained in port overnight which means the scheduled January 15 departure has been altered.

The ship was originally set to call Progreso and Cozumel, Mexico during its 5-day Western Caribbean cruise. Embarkation for that sailing will now be taking place today from 6:30 PM depending on weather developments. The ship is not expected to depart until 9:30 PM.

This is developing news and further updates are expected. We’ll also be updating on the following departures from Carnival Dream and Carnival Fantasy which are now delayed. 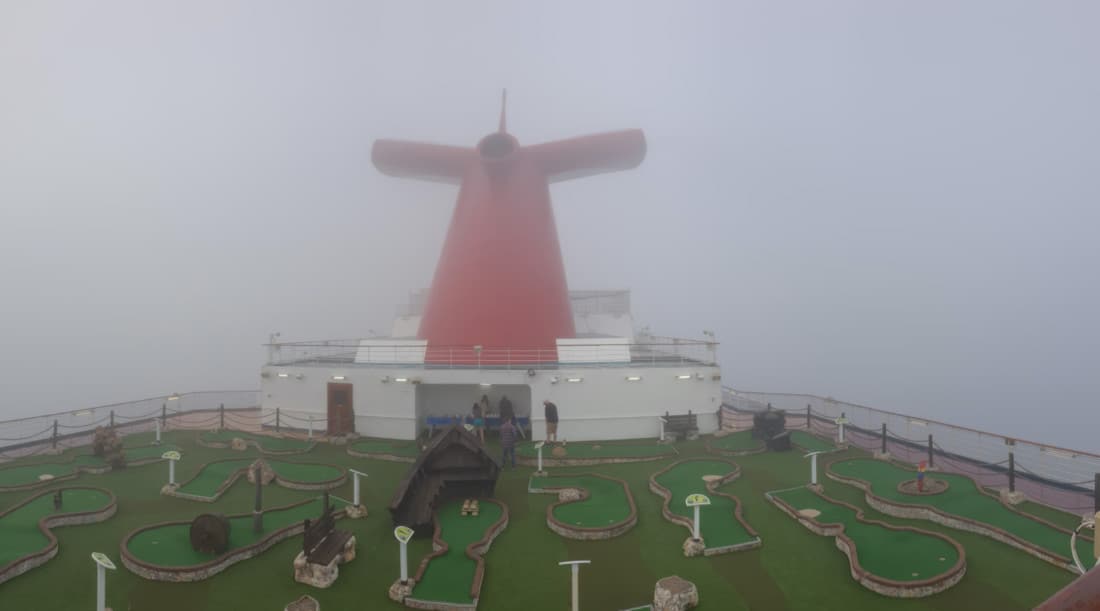