A new vision and transformation of Port Tampa Bay has been revealed that will also enhance the cruising experience from embarkation to debarkation.

Port Tampa Bay (PTB) has revealed plans for the waterfront to be totally transformed into a place where people can work, play and live, oh yes and cruise. The new area will be a piece of paradise and the cruise ships will become a center part of the new transformation. This is a preliminary phase of the development from the PTB so it could change before the final plan is accepted.

“Our vision is to create a waterfront community that is the envy of other top cities around the country,” said Paul Anderson, president and CEO of Port Tampa Bay. “This is an unprecedented development that will revolutionize Tampa and benefit the entire region.”

45 acres of port-owned land along Channelside Drive and the Ybor Channel will be part of the new look port area. Port Tampa Bay says there is a possibility of 9 million square feet of mixed-use space development along with $1.5 billion in private investment over the next decade or so.

The visions features lots of new office space, residential buildings, green spaces and new multipurpose cruise terminal facility for the most modern of cruise ships. There will also be two modern skyscrapers overlooking the entire bay area with fantastic views of vessels coming and going. The two buildings will be the tallest on Florida’s west coast that will only increase the area’s landmark importance.

“Great cities like San Diego, New Orleans and Vancouver have been built around their ports,” Anderson said. “We believe this will stand out as an innovative example of how to take full advantage of valuable waterfront, while balancing the needs of the maritime community and adjacent neighborhood.”

The park and green space area will feature cycling lanes, shopping areas, restaurants and elevated walkways with viewing points to watch the cruise ships. All of that will be backed up with a lush Florida landscaping. Cruise ship passengers are in for a treat once this visions plan gets the go ahead, passengers will never complain about delayed cruise ships if they can relax at a place like this! the Channel District vision is part of a much larger two decade plan for the entire port area and more details will be released in the future. 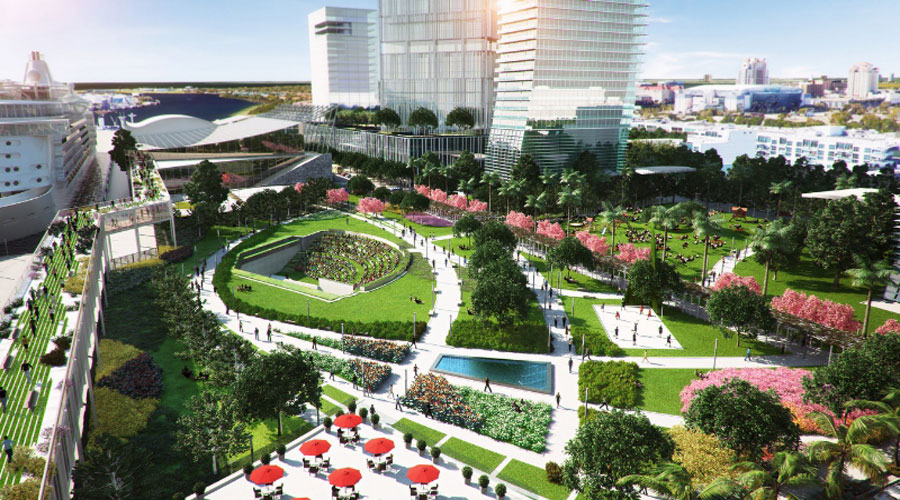