Cruise Ship Makes Rescue After Plane Crash in the Caribbean

Regal Princess which is operated by Carnival-owned Princess Cruises has been involved in a rescue operation after a small plane crashed near Grand Turk.

The Princess cruise ship was involved in a major rescue operation today after a small plane went down in the Caribbean. The two survivors from the aircraft needed an urgent rescue and the large Princess Cruises ship was able to do just that.

The plane went down southeast of Grand Turk which is a popular cruise destination. While Regal Princess was sailing towards its scheduled March 6 call at St. Thomas in the U.S. Virgin Islands the captain altered course to rescue the two survivors of the private plane.

Plane crash rescue at sea. They were saved! Good job to the #uscoastguard and the #regalprincess crew! #cascadetravel#beckworthhvac

A small rescue boat was deployed and rescued the two survivors who were apparently in a small liferaft. The U.S. Coast Guard was also involved in the rescue with a plane and likely providing assistance and directing the cruise ship.

On a cruise and just watched @USCG and @PrincessCruises Regal crew rescue two people that ditched a light plane in the Atlantic Ocean. Look for the raft and @USCG plane in the photo #Heroes pic.twitter.com/nCetLZLA93

The good news is that the captain has announced on the ship’s PA system that the two survivors are doing well after being brought onboard. No doubt they were given some medical attention and some food as soon as they were on the Princess cruise ship.

Amazing while onboard the Regal Princess we just witnessed our crew and the US Coast Guard rescue 2 people from the Caribbean that were victims of a plane crash @PrincessCruises @uscoastguard thank you for being so incredible!!!

Regal Princess is currently sailing a 7-night Eastern Caribbean cruise and continued on its way towards St. Thomas. The ship already called to the private resort of Princess Cays in the Bahamas on March 4. A visit to St. Maarten is also included on the itinerary before heading back to Fort Lauderdale, Florida with arrival on March 10.

A small plane crashed in the Caribbean Sea, and the @USCG called on our Regal Princess crew to assist with the rescue. We're happy to report both people are now safely onboard as the ship continues to St Thomas! https://t.co/MbLe9LKvPp pic.twitter.com/CyzAtvjIoc

The vessel is 141,000 gross tons which is among the largest in the fleet. There is a guest capacity of over 3,500 at double occupancy.

We must say well done to the crew of Regal Princess for coming to the rescue of the two survivors of the plane crash.

This isn’t the first time the cruise ship has made a rescue. In 2016 an elderly man on a small boat went missing after running out of fuel in the Baltic. Luckily Regal Princess was in the region and rescued him. You can read about it right here. 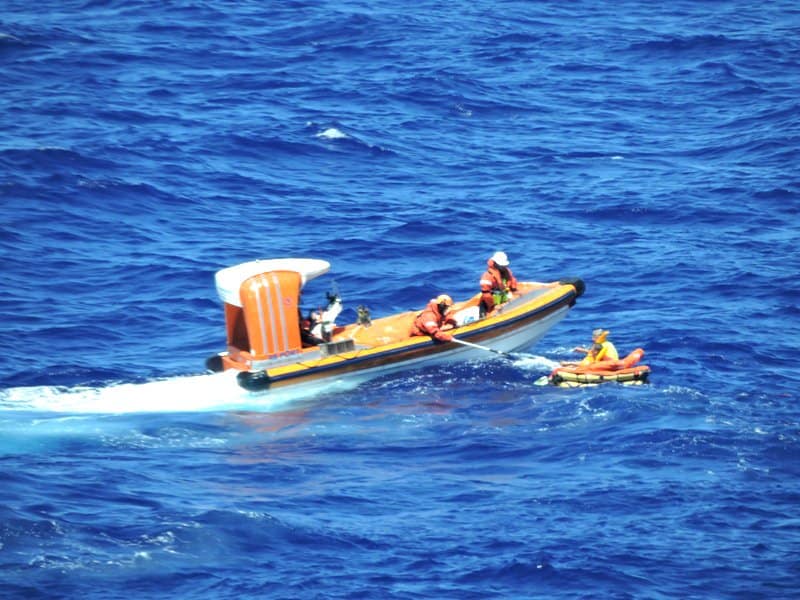