The Port of Galveston which is a popular cruise homeport in Texas braces for the major category 4 Hurricane Laura.

Even though cruise ship operations have been suspended, popular cruise homeports are still operating including Port of Galveston which is bracing for Hurricane Laura. The major hurricane is heading towards the coast of Texas and in its path is also Galveston island where the port is located.

Thankfully all the cruise ships are already away from the hurricane, this is much easier during the suspension as ships are not sailing any itineraries with no passengers on board. Port of Galveston closed to all marine traffic this morning and is now in condition ZULU. This also means gale force winds are expected within the next 12 hours.

There has been a mandatory evacuation order for the island of Galveston on Tuesday and the Galveston County judge has issued a disaster declaration. The Hurricane is a major threat to life and the safety of properties in the area. On Monday it was already announced for those near the Galveston seawall to prepare to leave.

The island has often been flooded in the past by storms and heavily impacted by hurricanes. Once Laura passed, the authorities will be able to assess any damage, and once cleared, cruise ships will be able to head back in.

The Hurricane has been upgraded to a category 4 status which is major and extremely dangerous. Laura is currently located in the Gulf of Mexico and just south off the coasts of Louisiana and Texas, 375 KM southeast of Galveston.

According to the National Hurricane Center (NOAA) in Florida, the Hurricane currently has maximum sustained winds of 125 MPH and is heading northwest at 16 MPH. There are expected to be storm surges, heavy rainfall, and powerful winds. Laura will reach the coast in several hours and will remain a Hurricane until Thursday evening. 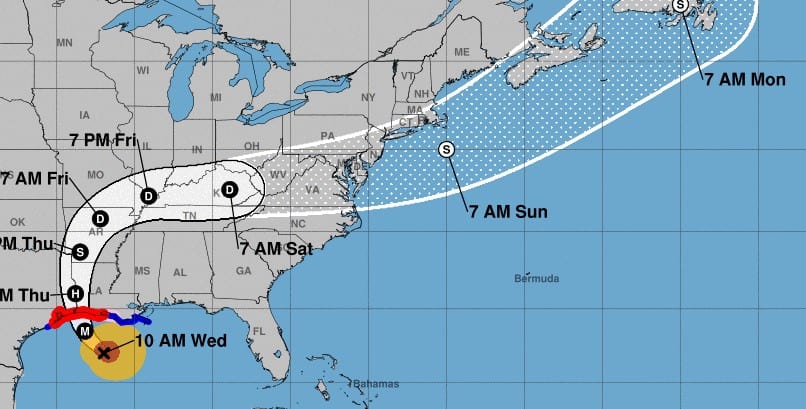