An MSC cruise ship has crashed into a dock and a smaller vessel in Venice, Italy. There have been multiple injuries and damage.

MSC Opera which is operated by MSC Cruises crashed into a dock and a smaller tourist boat in Venice, Italy on Sunday morning at around 8:30 AM after control had been lost. According to multiple reports, at least four people have been injured and many shocked as the large cruise ship plowed into the dock.

The incident occurred at the San Basilio Cruise Terminal in the historic city. The smaller vessel which was hit is The River Countess, a river cruise collection ship operated by Uniworld. The operator of that ship released the following statement:

Four guests with minor injuries were escorted to the hospital by Italian-speaking Uniworld staff. No crew members were injured.

The accident occurred after most guests of the 13-passenger River Countess had disembarked and were transferring for flights home.

Uniworld’s technical and nautical crises response team is on the way to Venice to thoroughly evaluate The River Countess and take necessary action.

Guest slated to arrive today have been informed and are under the care of Uniworld who is providing hotel accommodation.

Additional updates to this statement will be made as information becomes available.

Video footage of the crash has been posted on YouTube which we’ve included below. Locals nearby can be seen running as the large MSC ship heads straight towards the dock and the smaller vessel which was docked there at the time. There seems to be extensive damage to the smaller ship.

MSC Cruises has stated that there was engine failure and they were unable to take back control of the ship before it crashed into the dock and boat. There were tugboats helping the ship maneuver into position but this did not end as expected due to the engine issue.

You can see another video posted online from passengers who were on the ship at the time. More shock and worry and they look on while MSC Opera strikes the smaller vessel. Many people had to scramble to get out of the way:

MSC Opera was coming to the end of a 7-day Mediterranean cruise which departed its homeport in Venice on May 26. The ship was originally scheduled to depart the port later today on another identical voyage. The MSC cruise ship is 65,590 gross tons with a passenger capacity of over 2,100 at double occupancy.

The much smaller riverboat named The River Countess has a guest capacity of 130 along with 42 crew members. Thankfully, there were no deaths but this could have been tragic.

This news follows the tragedy just days ago of another river cruise boat which collided with an even smaller tourist boat on the River Danube in Hungary. Sadly, in that case, there were deaths and an ongoing criminal investigation. We’ve also posted of two large MSC cruise ship colliding in port in South America earlier in the year, you can read more about that right here.

This is developing news and will make more ongoing updates through the day. 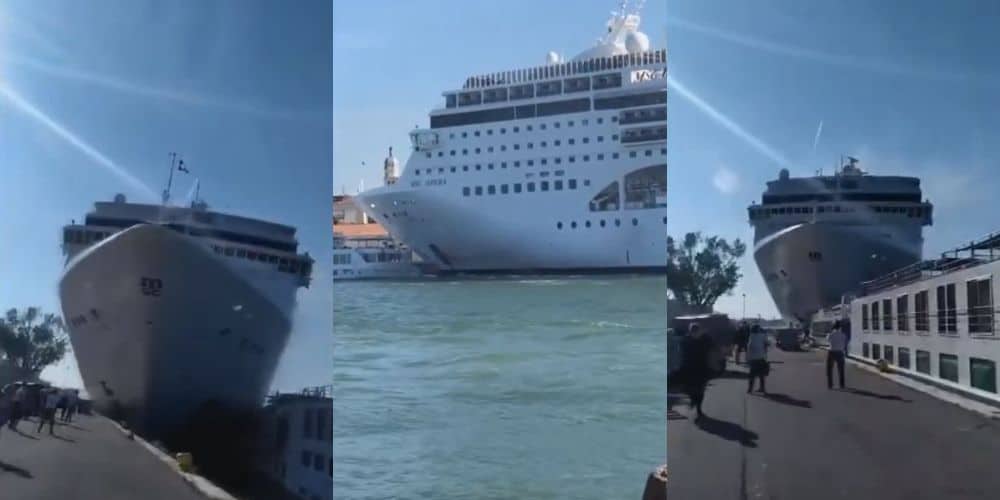