Cruise Ship Breaks from Moorings Due to Storm Ali

A cruise ship has broken free from its moorings in Greenock, Scotland this morning due to the strong winds of Storm Ali. The ship has needed assistance from tugs as the storm pounds northern parts of the UK.

The luxury cruise ship Nautica which is operated by Oceania Cruises has broken free from its mooring lines at around 11 AM on Wednesday, September 19.

Update from Oceania Cruises: This afternoon, while alongside at the port of Greenock, Nautica encountered extremely strong winds which resulted in the parting of mooring lines and the vessel being detached from the dock. All guests and crew safe and no injuries. pic.twitter.com/58RCG6hnef

It happened while the vessel was making a port of call in Greenock, Scotland. Unfortunately Storm Ali was hitting the region with up to 85 mph winds and as a result, this bad weather caused the ship to break free. The winds have already weakened since then but still poses a great risk.

“This afternoon, while alongside at the port of Greenock, Scotland, Nautica encountered extremely strong winds which resulted in the parting of mooring lines and the vessel being detached from the dock.”

“All guests and crew on board are safe and there were no injuries.”

“Tugs have been called in to assist and the vessel is currently being held off of her berth.

“478 guests and 26 crew are ashore and are being looked after by the shore operations teams until conditions are safe enough for the vessel to be returned to the passenger terminal.”

All 478 guests and the 26 crew members are safe and those passengers who were on land at the time are being taken care of by a shoreside operations team. Tugs are being used to keep the Nautica stable away from the dock and when the high winds weaken the ship will dock again. There is also a pilot onboard as the ship is anchored.

Also Read: What Happens If The Cruise Ship Is In Bad Weather

The Oceania cruise ship is currently sailing a 12-night cruise around the British Isles and departed Southampton, UK on September 14. Nautica is a small luxury ship which can often sail to ports which larger ships can’t. The vessel is 30,200 gross tons. 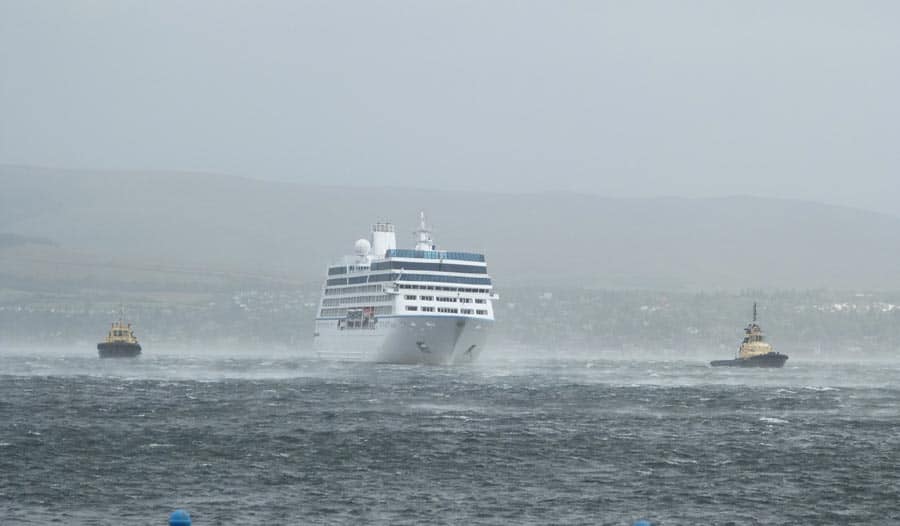