It's not really going to plan for the cruise lines in this week's cruise news update as the industry continues to resume operations. 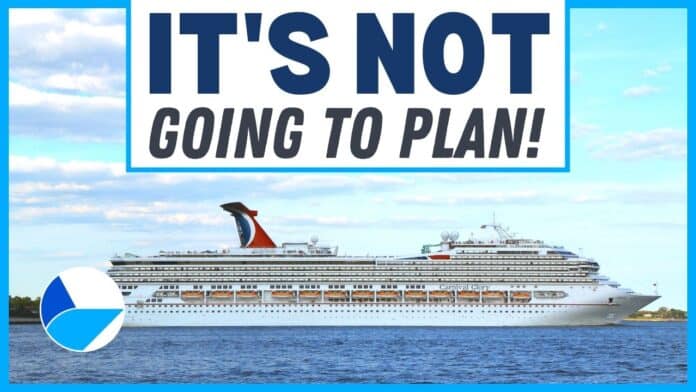 Here we go with another cruise news update with some of the major stories from the past seven days and even a look ahead. But is it all going to plan for the cruise lines in resuming operations?

So is it all going to plan as cruise lines continue to move forward on resuming cruise operations? Well for Carnival Cruise Line it doesn’t seem to be so smooth. We’ve got updates on the next batch of Carnival ships that are restarting, protocol changes from Carnival and Disney Cruise Line.

And even P&O Cruises planning to have two ships in the Caribbean before the end of the year along with a big day for Royal Caribbean’s Oasis of the Seas, which is restarting operations. Plenty to get through.

Five Carnival Ships to Restart Through November and December

So let’s start with the big news from the week with Carnival Cruise Line announcing which ships will be resuming operations through November and December. It’s not all gone to plan as just five Carnival ships will return through the two months. The fleet won’t be fully back in action before the end of the year which was the first hope.

Five vessels in total will return in 2022, including Carnival Liberty out of Port Canaveral, Carnival Sunshine from Charleston, Carnival Paradise from Tampa, Carnival Ecstasy out of Jacksonville, and Carnival Sensation out of Mobile. That does mean further cancellations as those ships remain on hold longer than expected.

Carnival Splendor and Carnival Spirit, based out of Australia, are to remain on hold through December 16 as the cruise line continues to work with the government on a safe return down under.

Carnival Cruise Line also provides an update on its protocols to align more with recent updates by the U.S. Centers for Disease Control and Prevention (CDC) and new rapid testing sites at all of its homeports.

The cruise line will continue to follow CDC guidelines to make sure guests and crew remain safe. Guests will have to present proof of vaccination and a negative test at check-in, something which is already in place for current departures.

However, Carnival plans to make it easier by setting up mobile pre-cruise rapid testing sites at all of its homeports. The full details are still to come, but this will make it easier for those struggling to get tested before their cruise.

On August 29, 2021, the CDC updated its Conditional Sailing Order, including adjustments to testing, which now needs to be completed within two days before sailing rather than the previous three days. Carnival now says, “Effective with sailings as of September 13, 2021, the CDC requires pre-cruise testing for vaccinated guests to be taken within two days prior to the sailing date. If the sailing is on Saturday, the test may be taken on Thursday and Friday, and as late as Saturday, if you are guaranteed to receive your results in time for check-in.”

P&O Cruises plans to have two ships sailing the Caribbean before the end of the year. The cruise line has experienced a hugely successful summer return with the launch of its newest flagship Iona and its popular summer seacations onboard Britannia. The cruise line is ready to expand its cruises and has chosen to do this in the Caribbean with Britannia and Azura.

Britannia will set off on her transatlantic voyage from Southampton in southern England on October 22. The vessel will take 14 days to sail to the Southern Caribbean island of Barbados before she starts the first of a series of 14-day cruises in the Caribbean.

Azura will be the second ship sailing the Caribbean for the UK-based cruise line. Starting December 10, the cruise ship will also be sailing from Barbados on 14-day itineraries that include ports of call such as Trinidad and Tobago, Aruba, Bonaire, Dominica, and Martinique.

Plenty to look forward to and this will be the first chance British cruisers will be able to enjoy a cruise in the Caribbean since the suspension started in 2020.

Disney Cruise Line has announced the restart date for Disney Wonder and an update to its protocols. The ship will start operations on October 1 on an itinerary that will feature three-night sailings from San Diego with a stop at Ensenada, Mexico, and a day at sea, while 4-night sailings will feature two days at sea and a stop at Cabo San Lucas, Mexico.

Disney Cruise Line has returned to the U.S. with Disney Dream’s 3- and 4-night itineraries out of Florida. Disney Fantasy will resume on September 11. The cruise line will only be visiting Castaway Cay for the time being with both ships.

However, the recent policy changes from the Bahamian government mean that the cruise line had to require all guests to be vaccinated on cruises to the Bahamas, just like other cruise lines. It’s also due to updated guidelines issued on August 27, 2021, from the U.S. Centers For Disease Control and Prevention (CDC).

For cruises departing from San Diego in October, Disney Cruise Line now requires all guests of 12 years and older to be fully vaccinated 14 days before boarding. Guests 11 years old and younger do not have to be vaccinated but should provide proof of a negative test. On November 5, Disney Wonder will depart for a 14-day voyage that will take guests through the Panama Canal to Galveston from San Diego. Disney has made some significant changes for this voyage, requiring all guests of all ages to be fully vaccinated.

One more health policy change for guests onboard for cruises to the Bahamas between September 3 and November 1. The Bahamas requires all cruise ship passengers to be fully vaccinated or provide a negative PCR test if 11 years or younger. To comply, Disney Cruise Line has now said that all guests 12 years and older should be fully vaccinated with an approved vaccine.

On and after September 13 all guests of all ages, whether vaccinated or not, are required to take a test administered at the terminal before embarkation.

With so many changes depending on where ships are departing from, do make sure you check the cruise line site for all the details before your cruise so you don’t miss any adjustments.

Carnival Cruise Line has already announced the cruise directors for the eight ships currently back in service and you can check that all out over on cruisehive.com.

Oasis of the Seas Restarting Operations

Royal Caribbean’s Oasis of the Seas is finally restarting cruise operations and will be the first to do so out of the Cape Liberty Cruise Port in Bayonne, New Jersey. So the cruise ship is departing on September 5 on a seven-night Bahamas sailing including calls at Port Canaveral, Florida; the cruise line’s private island of Perfect Day at CocoCay, Bahamas; and Nassau, also in the Bahamas. The ship will arrive back in New Jersey on September 12.

Oasis of the Seas will continue to sail seven-night Bahamas cruises and will also begin seven-night Eastern and Western Caribbean cruises from Miami in November 2021. Including Oasis of the Seas, 14 Royal Caribbean ships have restarted operations which is more than half the fleet. Liberty fo the Seas will be next with cruises from Galveston, Texas starting on October 3.

With Hurricane Ida having a huge impact on New Orleans, Carnival Cruise Line has canceled Carnival Glory’s September 5th departure. The main reason was at the time, the city was still under emergency management and the channel leading towards the cruise terminal remained closed.

Carnival Glory’s first return cruise from New Orleans was scheduled to depart on September 5 on a seven-day voyage, including calls at Bimini, Freeport, and Nassau, all in the Bahamas. The ship will now restart from the Port of New Orleans on Sunday, September 12.

Since the cancellation was first announced, the Carnival Glory has already returned to the port and is currently making preparations for its restart on September 12. That cruise will be a seven-day Western Caribbean itinerary with stops at Mahogany Bay, Belize, and Cozumel, along with three sea days. The Conquest-class vessel will become the ninth ship in the fleet to resume operations and the first out of New Orleans since suspensions first began in March 2020.

So those were just a handful of the cruise stories from the week, we’ve got even more including more protocol updates from MSC Cruises and Princess Cruises, construction begins on the first Sphere-class ship for Princess Cruises, Mexico plans on revising its protocols for tourists, the CDC elevates its travel level for two Caribbean cruise destinations, Carnival Valor arrives in Miami after dry dock and so much more.