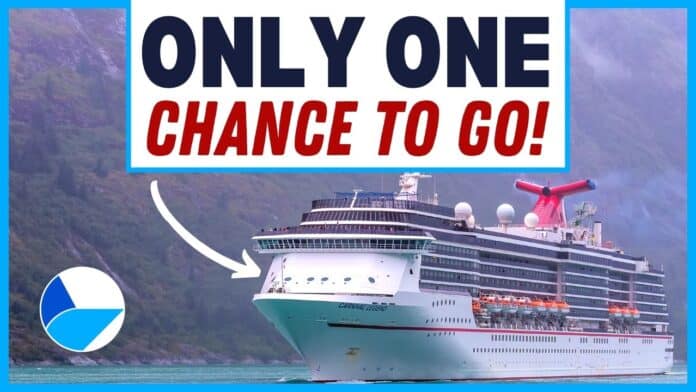 There is plenty going on in the cruise industry as cruise lines adapt their protocols and plan for the coming months. We’ve got your cruise news update to make sure you haven’t missed a thing from the past week.

Lots going on this week as we’ve got updates from many of the major cruise lines and how about that epic 14-day cruise from Carnival which will to Canada and Greenland? We’ll get into all that along with Norwegian Cruise Line’s upcoming new ship, more cancellations down under, a delayed restart for Royal Caribbean, An Alaska senator working hard to protect cruises, and of course an update on the Carnival Radiance transformation.

Carnival Cruise Line Ambassador John Heald already teased it on Wednesday, but then on Thursday, the cruise line released a one-time 14-day voyage that will include calls to Canada and Greenland. Carnival Legend will be the lucky ship to be offering the epic cruise out of Baltimore, Maryland. However, there is just one chance to go on this cruise!

The Spirit-class vessel will depart on September 2, 2023, from Baltimore on a 14-day voyage. The ship will first sail five sea days in a row before arriving at Nanortalik in Greenland on September 8. Carnival Legend will then make a call at (K)Qaqortoq, also in Greenland, on the following day. Both calls to the country are located on the southern coast.

The cruise ship will sail another full day at sea before arriving at St. Anthony in Newfoundland on September 11, 2023. The following day, there will be a call at Corner Brook, also in Newfoundland. The final port of call will take place on September 13 in Sydney, Nova Scotia. Following the last two sea days, the Carnival Legend will arrive in Baltimore on September 16, 2023.

The voyage is part of Carnival Journeys, special sailings that are offered by the cruise line. Guests will be able to experience the cultural aspect of the ports the ship will visit. The cruise is even more special as Carnival’s Brand Ambassador will be onboard, offering guests the chance to meet and mingle during the one-of-a-kind voyage.

Carnival Legend has not yet resumed cruise operations but is scheduled to restart on November 14 out of Baltimore. The ship will replace Carnival Pride sailings, as that ship will head down to begin cruises out of Tampa, Florida.

Cruise Cancellations Down Under

However, uncertainty regarding protocols, government guidance, and public health requirements has put the cruise lines in a spot where further cancellations are the only option.

Princess Cruises has cancelled all voyages until January 27, citing the uncertainty of cruises returning to the region as the main reason. There are three Princess cruise ships impacted by this.

For Carnival Cruise Line, Carnival Splendor and Carnival Spirit will now remain on hold through January 16, 2022. Previously, the two Carnival cruise ships were suspended through December 16, 2021. As the situation in the country has not moved forward to reopen, the cruise line has continued to extend its suspension since first starting in March 2020.

Big news from Norwegian Cruise Line with the announcement that Norwegian Prima will homeport in Galveston, Texas in 2023 and 2024 following the ship’s inaugural season.

The company also announced a massive amount of entertainment options that will feature onboard, including the first-ever three-level 1,378-foot long racetrack with the Prima Speedway and its first-ever freefall drop dry slides.

The new three-level racetrack called The Prima speedway will go around and through the vessel’s funnel, feature 14 turns for 15 drivers in go-karts that will reach 30mph.

The racing doesn’t stop there though; the ship will have the world’s first freefall dry slide called The Drop, where users will experience a 10-story plunge reaching the highest G-forces of any cruise line and two more dry slides called The Rush where passengers can race each other down the slides.

Making its splashing first appearance on Norwegian Prima as part of the ship’s Aqua Park and Main Pool area will be the Brand’s first Tidal Wave waterslide featuring gushing surfs where guests can ride an innertube to catch the perfect wave. Guests looking to relax can do so in either one of two infinity hot tubs or under the area’s cascading water feature.

Onboard entertainment comes in the form of “Summer: The Donna Summer Musical.”, brought by the production team that introduced “Jersey Boys” to Norwegian Bliss guests. The Musical will feature a score of more than 20 of Summer’s mega-hits and will last for 75 minutes.

We could keep talking for hours about the 142,500 gross ton vessel Norwegian Prima that’s currently in the final stages of outfitting will debut in August 2022.

We’ve been reporting on the transformation of Carnival Victory into Carnival Radiance for years already. After delays due to the suspension of operations, the ship is finally in the final stages of its dry dock. The cruise line has also announced that the ship is now finally named Carnival Radiance.

The ship is currently undergoing a $200 million bow-to-stern upgrade at the shipyard in Cadiz, Spain. The vessel is receiving tons of new features, including all the popular FUN 2.0 enhancements already seen across the fleet. Carnival Radiance is also receiving 110 new guest suites and staterooms, along with expanded retail spaces.

Another highlight will be the new Big Chicken restaurant created by Carnival’s Chief Fun Officer Shaquille O’Neal that debuted on Mardi Gras earlier this year.

One of the biggest highlights of the transformation is the new name on the hull and the shiny new red, white and blue livery, which has already rolled out to five cruise ships during their dry docks.

Once complete, the Carnival cruise ship will depart the shipyard in Spain on October 18 and begin a seven-week journey to her new homeport in Long Beach, California, to join Carnival Panorama.

Carnival Radiance will begin cruises from Long Beach on December 13, 2021, and will become the final ship in the fleet to resume this year.

On September 15, 2021, U.S. Senator Lisa Murkowski announced a new bill to help Alaska avoid a repeat of no cruise ships being allowed to visit the state due to the Passenger Vessel Services Act. That bill, which is called ‘Cruising for Alaska’s Workforce Act’ has now been introduced to congress.

The bill aims to provide cruise ships sailing to Alaska from the U.S. a permanent exemption from the PVSA, which would result in the vessels not having to call in Canada before heading to visit Alaska.

The Cruising for Alaska’s Workforce Act would then come to an end once there is a U.S.-built cruise ship that can carry more than 1,000 passengers. Currently, the only U.S. flagged cruise ship is the Pride of America, operated by Norwegian Cruise Line, based in Hawaii. All other cruise ships are flagged in countries such as Panama and the Bahamas.

The new bill introduced comes after the Senator was heavily involved in getting the Alaska Tourism Restoration Act (ATRA) passed through congress and signed by President Biden on May 24, 2021. That bill came to light after Canada banned cruise ships for more than a year, which resulted in cruises being unable to call in Alaska due to the Passenger Vessel Services Act.

We’ll just have to wait and see how the bill is received by congress so do keep checking on the website for all the latest developments.

Royal Caribbean’s Spectrum of the Seas scheduled restart for October 5 from Hong Kong has been cancelled along with the two following sailings. It means the October 5th, 8th, and 10th departures will no longer occur, and the first cruise is now set to begin on October 14.

The cancellations came after the Hong Kong Government elevated restrictions and increased rules for passengers from Europe, North America, and Asia. It results in difficulty for crew members from their home countries to travel to the vessel.

Spectrum of the Seas is only sailing short four and three-night getaway cruises to nowhere out of Hong Kong. From January 12, 2022, the Quantum Ultra class cruise ship will begin offering international cruises with a call to Japan.

The cruises from Hong Kong are for residents only, and guests must be fully vaccinated at least 14 days before departure. A negative test result must also be shown before being allowed on board. The protocols are in place as required by authorities in Hong Kong, and the details may differ from other countries such as the U.S.

So those were just a handful of the cruise news headlines from the week, we’ve got even more including Royal Caribbean updating protocols from Singapore, a business update from Carnival Corporation, an update from Royal Caribbean Group CEO, Holland America Line forgetting to inform guests about a cruise cancellation and many more. It’s just been another busy week in the cruise industry!