Your cruise news update with the latest headlines as cruise lines make testing easier due to latest CDC requirements. 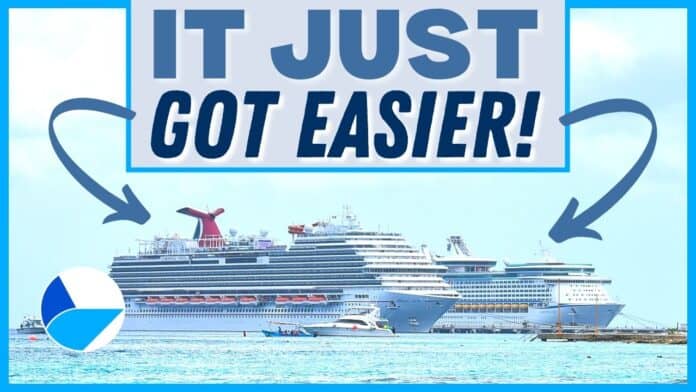 Here we go with another busy cruise news update, and two cruise lines just made it a whole lot easier for guests scrambling to get tested for a cruise.

We’ve got so much to get through as there are so many changes with cruise lines adapting to make it easier for guests when it comes to testing, including from Carnival and Royal Caribbean. We’ve got new ship restart dates from Disney Cruise Line, some good news from MSC Cruises resuming out of Florida and Carnival Pride restarting from Baltimore, updates on three more Holland America ships, and plenty more.

We start with Carnival Pride, which is resuming cruise operations on September 12 from Baltimore, Maryland. The Spirit-class ships will be the first cruise ship to begin cruises from the port in 18 months and the ninth in the fleet to resume.

The ship will begin with a seven-day cruise to the Bahamas, including calls to Nassau, Carnival’s private island of Half Moon Cay, and Freeport. Guests will also have three full days at sea, with the ship arriving back home on Sunday, September 19.

Following an epic 14-day Pana canal reposition cruise departing Baltimore on October 31, Carnival Pride will begin cruising out of Tampa, Florida, on November 14. The ship will be sailing a range of itineraries from Tampa to the Bahamas and the Western Caribbean.

Royal Caribbean just made it easier for guests who are scrambling to get their pre-cruise test completed. It also comes in handy after the CDC recently updated its requirements for passengers to show a negative test result taken within three days before departure. That will change to just two days from September 13, 2021.

Guests can now order a COVID home test kit from Royal Caribbean through the Optum store. The test kit by Abbott BinaxNOW is available at $69.99 for a two-pack and $99.99 for a three-pack. As speed is essential due to the updated protocols, the test pack will ship on the same day as ordered before noon Monday through Saturday on non-holidays.

It is important to know this home test kit is only valid for Royal Caribbean guests who are fully vaccinated. This is in line with CDC requirements due to the use of at-home telehealth. The rapid antigen home test will be monitored virtually to make sure the test is taken correctly. Using eMed Telehealth Service, the result will be verified in 15 minutes and come via email and the NAVICA app.

Royal Caribbean has already posted the link to buy the test kit and updated some of its FAQ details to go along.

And guess what, when one major cruise line does something, usually others follow! Carnival Cruise Line has provided a link for a home test kit recommendation which is also sold in the same store as Royal Caribbean’s test kit.

The home tests, which have now been approved by the CDC and by Carnival Cruise Line as a valid COVID-19 rapid test, are relatively easy to do. For those with regular flights or cruises, it will relieve a lot of the hassle that comes with constant testing and the limited time frame cruisers have for pre-cruise testing.

The Abbot BinaxNOW test, which costs $69.99 online, includes a personal virtual visit from an eMed Certified Guide who will help you perform all the steps to properly administer the test and figure as the third-party medical verification, which is required by Carnival.

It is important to know that the test is slightly different from the one being sold by Royal Caribbean, so do make sure you choose the correct one. It should all be good as long as you follow the correct link from the cruise lines.

And while we’re on the topic of testing… Carnival Corporation has announced it will be making the pre-boarding testing requirement much more convenient. The cruise company contracted Quest Diagnostics to provide access to more than 1,500 locations where guests from all Carnival Corporation cruise lines sailing from US ports can get tested.

The new initiative will make the pre-boarding testing requirements more convenient and accessible for all of the cruise lines guests sailing from the United States, such as Carnival Cruise Line, Holland America Line, Princess Cruises, and Seabourn Cruise Line.

Guests will have access to 1,500 locations throughout the United States, including patient service centers, select Walmart locations, and retail pharmacy testing locations. Carnival also announced the possibility that the cruise line would implement testing near the embarkation terminal.

Guests who would like to get tested at any of the Quest diagnostics centers can make a reservation for testing online via a secure link provided by Carnival Cruise Line, Princess Cruises, Holland America Line, or Seabourn.

The only downside to the testing through Quest diagnostics is that the results can take up to 48 hours before they become available. This means that guests would already need to travel to the terminal, even though they could be positive. Something the home test approved by Carnival Cruise Line, Royal Caribbean, and the CDC negates by giving the result within 15 minutes.

After completing its simulated sailing to stress tests protocols, MSC Divina has been approved to restart cruise operations from the U.S. The test voyage was completed last week, which means the cruise line can focus on the ship’s revenue restart.

MSC Divina will become the second ship in the fleet to resume from the U.S. this month and the 11th in the fleet. Cruises will begin from Port Canaveral, Flordia, on September 16, the first time the cruise line will operate from the port.

The vessel will offer three-, four- and seven-night itineraries that will include Port Canaveral as an embarkation port and the cruise capital of the world, PortMiami. The cruises will sail the Caribbean and the Bahamas, including the cruise line’s private island of Ocean Cay MSC Marine Reserve.

The cruise line is sailings under its Health and Safety protocols and following guidelines from authorities in Florida and beyond. From September 3, all guests 12 years and older must be fully vaccinated, which will remain in effect until November 1, 2021.

Holland America Fleet Back by End of Spring

Holland America Line provides an update on the final three cruise ships that will restart operations in 2022. The cruise line continues to push forward with its phased-in return to service, and all ships will be back in action by late Spring.

The cruise line is working with the authorities in Japan to have Noordam restart operations with some sailings. The ship is scheduled to kickstart cruises in March with three 14-day cruises from Yokohama, Japan. In April, Noordam will cross the Pacific Ocean to begin cruises to Alaska between Vancouver in Canada and Whittier in Alaska.

Oosterdam will resume sailings on March 1, 2022, from Italy and Spain. In addition, guests can also choose seven- and 12-day roundtrip cruises from Venice in Italy to popular Mediterranean cruise ports. Oosterdam will then operate a transatlantic voyage in November 22, followed by transit through the Panama Canal to offer voyages in South America and Antarctica.

Westerdam will begin a season of seven-day Alaska voyages from May 8, 2022. The Holland America vessel will be based out of Seattle, Washington. In September 2022, Westerdam will cross the Pacific Ocean and begin 14-day cruises out of Singapore, Hong Kong, China, and Yokohama (Tokyo).

Disney Magic will restart cruises in the U.S. on October 28 after already resuming sailings in the UK in the summer. The ship will be offering 4- and 4-night sailings out of Miami, Florida. The four-night cruises will be calling in the Bahamas, while the five-night cruises will also include a call in Mexico.

Although unfortunate, the cruise line says it is inevitable that they have to amend some itineraries and cancel two cruises scheduled before October 28. For now, sailings onboard Disney Magic scheduled for October 21 and October 24 have been cancelled.

Disney Fantasy will now be sailing on cruises of seven nights or longer from Port Canaveral starting October 9, 2021. These cruises will include stops in the Bahamas and Mexico.

So those are just some of the major stories from the past week, we’ve got even more cruise news including new protocols for the casino on Carnival cruise ships, Royal Caribbean releases a new video ahead of its restart from California, the CDC elevates levels for two cruise destinations, Carnival Glory is housing first responder in New Orleans and many more. It’s just been another busy week in the cruise industry.